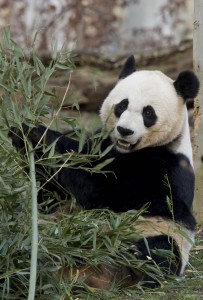 Scientists at the Smithsonian’s National Zoo detected a secondary rise in urinary progesterone levels in the Zoo’s female giant panda Mei Xiang (may-SHONG). This hormone rise indicates that it should be 40 to 50 days before Mei Xiang either gives birth to a cub or comes to the end of a pseudopregnancy, or false pregnancy, which is common in giant pandas.

“The hormonal dynamics of pregnant and pseudopregnant pandas are extremely similar,” said Janine Brown, reproductive biologist at the Zoo. “We study the hormone levels, work from past data and monitor her behavior closely, but all signs can indicate she may be pregnant even though she is not. So we remain hopeful but cautious.”

Since the artificial insemination, scientists have conducted weekly hormonal analyses on urine samples from Mei Xiang. Zoo veterinarians are also conducting biweekly ultrasounds to monitor changes in her reproductive tract and evaluate for evidence of a fetus, which has not yet been detected. Because panda fetuses do not start developing until the last weeks of a gestation period, Zoo veterinarians indicate that it may be too early to detect a fetus—the only way to be certain that Mei Xiang is, in fact, pregnant.  In 2005, in the last weeks leading up to the birth of Mei Xiang’s only cub Tai Shan (tie-SHON), she would not cooperate for her weekly ultrasounds, and it was not possible to definitively determine if she was pregnant.

Tai Shan, who was born July 9, 2005, as a result of artificial insemination, now resides at the China Conservation and Research Center for the Giant Panda. Mei Xiang, 12 years old, and Tian Tian, 13 years old, are on loan from China. The “Giant Panda Cooperative Research and Breeding Agreement,” signed this past January by Chinese and National Zoo officials, extends the Zoo’s giant panda program though the end of 2015.