For the first time since exoplanets, or planets around stars other than the sun, were discovered almost 20 years ago, X-ray observations have detected an exoplanet passing in front of its parent star.

An advantageous alignment of a planet and its parent star in the system HD 189733, which is 63 light-years from Earth, enabled NASA’s Chandra X-ray Observatory and the European Space Agency’s XMM Newton Observatory to observe a dip in X-ray intensity as the planet transited the star. 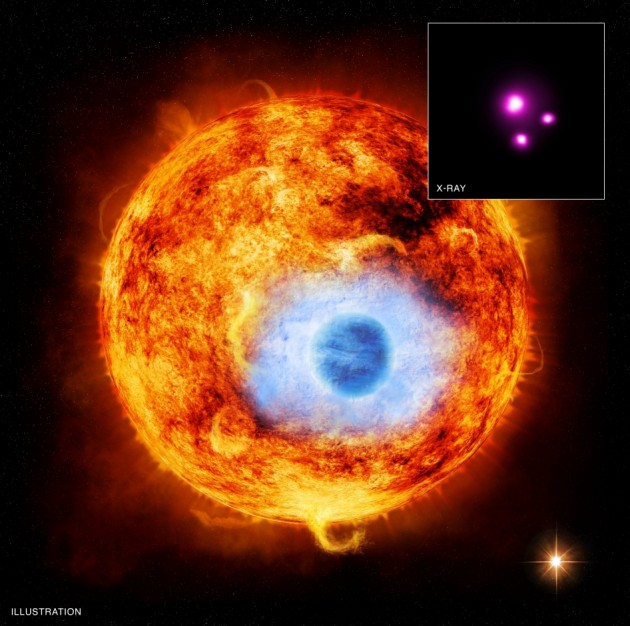 This graphic depicts HD 189733b, the first exoplanet caught passing in front of its parent star in X-rays. The main figure is an artist’s impression showing the HD 189733 system, containing a Sun-like star orbited by HD 189733b, an exoplanet about the size of Jupiter. Also in the illustration is a faint red companion star, which was detected for the first time in X-rays with these observations. This star orbits the main star about once every 3,200 years. The inset contains the Chandra image of HD 189733. (X-ray: NASA/CXC/SAO/K. Poppenhaeger et al; Illustration: NASA/CXC/M. Weiss)

“Thousands of planet candidates have been seen to transit in only optical light,” said Katja Poppenhaeger of Harvard-Smithsonian Center for Astrophysics (CfA) in Cambridge, Mass., who led a new study published in the Aug. 10 edition of The Astrophysical Journal. “Finally being able to study one in X-rays is important because it reveals new information about the properties of an exoplanet.”

The team used Chandra to observe six transits and data from XMM Newton observations of one.

The planet, known as HD 189733b, is a hot Jupiter, meaning it is similar in size to Jupiter in our solar system but in very close orbit around its star. HD 189733b is more than 30 times closer to its star than Earth is to the sun. It orbits the star once every 2.2 days. 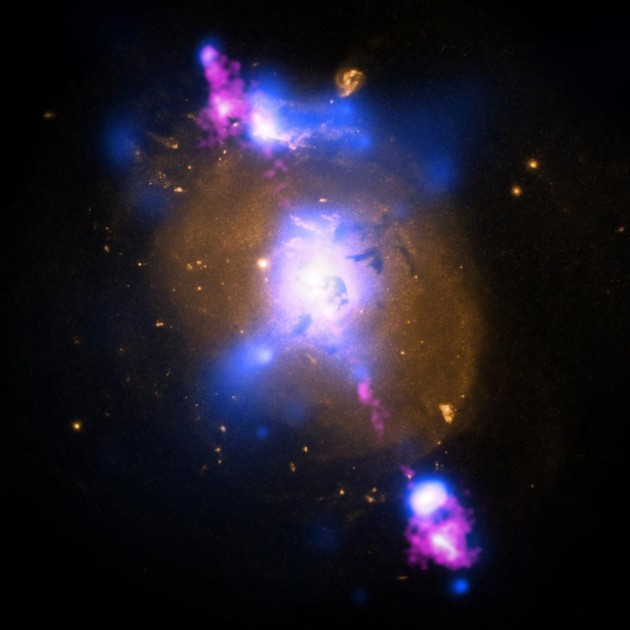 This composite image of a galaxy illustrates how the intense gravity of a supermassive black hole can be tapped to generate immense power. The image contains X-ray data from NASA’s Chandra X-ray Observatory (blue), optical light obtained with the Hubble Space Telescope (gold) and radio waves from the NSF’s Very Large Array (pink). (Image courtesy NASA)

HD 189733b is the closest hot Jupiter to Earth, which makes it a prime target for astronomers who want to learn more about this type of exoplanet and the atmosphere around it. They have used NASA’s Kepler space telescope to study it at optical wavelengths, and NASA’s Hubble Space Telescope to confirm it is blue in color as a result of the preferential scattering of blue light by silicate particles in its atmosphere.

The study with Chandra and XMM Newton has revealed clues to the size of the planet’s atmosphere. The spacecraft saw light decreasing during the transits. The decrease in X-ray light was three times greater than the corresponding decrease in optical light.

“The X-ray data suggest there are extended layers of the planet’s atmosphere that are transparent to optical light but opaque to X-rays,” said co-author Jurgen Schmitt of Hamburger Sternwarte in Hamburg, Germany. “However, we need more data to confirm this idea.”

The researchers also are learning about how the planet and the star can affect one another.

Astronomers have known for about a decade ultraviolet and X-ray radiation from the main star in HD 189733 are evaporating the atmosphere of HD 189733b over time. The authors estimate it is losing 100 million to 600 million kilograms of mass per second. HD 189733b’s atmosphere appears to be thinning 25 percent to 65 percent faster than it would be if the planet’s atmosphere were smaller.

“The extended atmosphere of this planet makes it a bigger target for high-energy radiation from its star, so more evaporation occurs,” said co-author Scott Wolk, also of CfA.

The main star in HD 189733 also has a faint red companion, detected for the first time in X-rays with Chandra. The stars likely formed at the same time, but the main star appears to be 3 billion to 3 1/2 billion years younger than its companion star because it rotates faster, displays higher levels of magnetic activity and is about 30 times brighter in X-rays than its companion.

“This star is not acting its age, and having a big planet as a companion may be the explanation,” said Poppenhaeger. “It’s possible this hot Jupiter is keeping the star’s rotation and magnetic activity high because of tidal forces, making it behave in some ways like a much younger star.”