The discovery of a pattern of X-ray “stripes” in the remains of an exploded star may provide the first direct evidence that a cosmic event can accelerate particles to energies a hundred times higher than achieved by the most powerful particle accelerator on Earth. 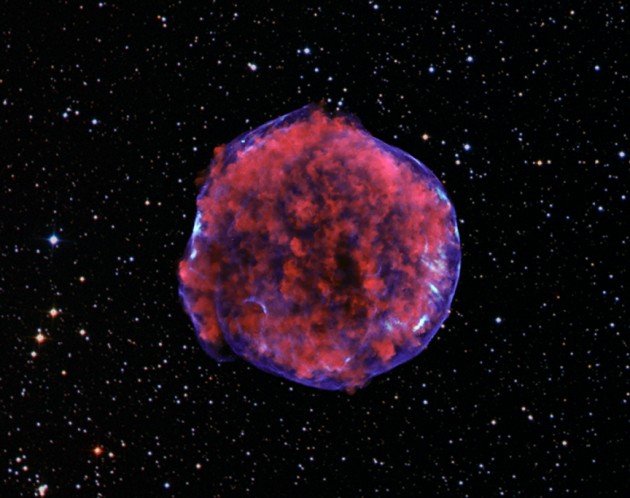 This image comes from a very deep Chandra observation of the Tycho supernova remnant, produced by the explosion of a white dwarf star in the Milky Way Galaxy. Low-energy X-rays (red) in the image show expanding debris from the supernova explosion and high energy X-rays (blue) show the blast wave, a shell of extremely energetic electrons . These high-energy X-rays show a pattern of X-ray “stripes” never previously seen in a supernova remnant. (NASA/CXC/Rutgers/K.Eriksen et al.;)

This result comes from a very long observation of the Tycho supernova remnant with NASA’s Chandra X-ray Observatory, operated for NASA by the Smithsonian Astrophysical Observatory. It could explain how some of the extremely energetic particles bombarding the Earth, called cosmic rays, are produced. 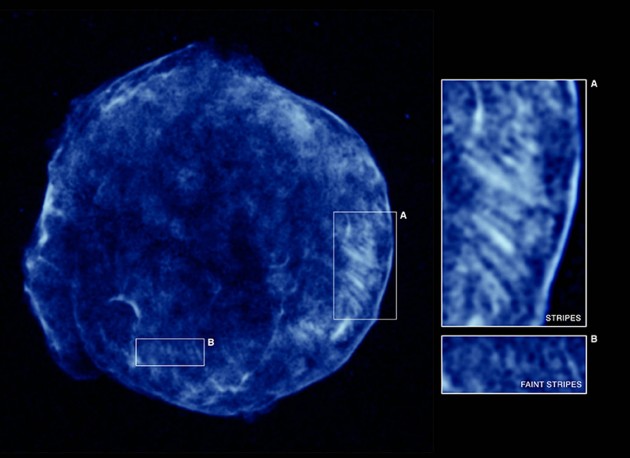 This Chandra image shows the higher energy X-rays detected from the Tycho supernova remnant. These X-rays show the expanding blast wave from the supernova, a shell of extremely energetic electrons. Close-ups of two different regions are shown, region A containing the brightest stripes and region B with fainter stripes. The stripes are areas where the magnetic fields are much more tangled and the particle motion is much more turbulent than surrounding areas. (Credit: X-ray: NASA/CXC/Rutgers/K.Eriksen et al.;)

“We’ve seen lots of intriguing structures in supernova remnants, but we’ve never seen stripes before,” said Kristoffer Eriksen, a postdoctoral researcher at Rutgers University who led the study. This latest study from Chandra provides support for a theory about how magnetic fields can be dramatically amplified in such blast waves.

In this theory, the magnetic fields become highly tangled and the motions of the particles very turbulent near the expanding supernova shock wave at the front edge of the supernova remnant. High-energy charged particles can bounce back and forth across the shock wave repeatedly, gaining energy with each crossing. Theoretical models of the motion of the most energetic particles—which are mostly protons—are predicted to leave a messy network of holes and dense walls corresponding to weak and strong regions of magnetic fields, respectively.

The X-ray stripes discovered by the Chandra researchers are thought to be regions where the turbulence is greater and the magnetic fields more tangled than surrounding areas, and may be the walls predicted by the theory. Electrons become trapped in these regions and emit X-rays as they spiral around the magnetic field lines. 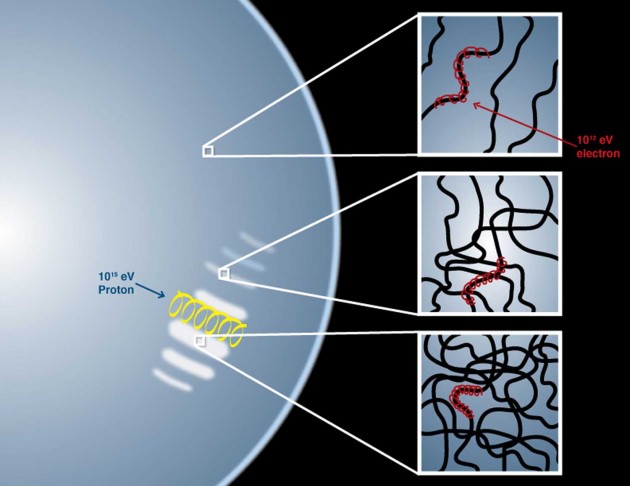 This illustration explains what scientists believe is occurring in the stripes in the Tycho supernova remnant. The blue, circular region on the left is a schematic representation of the outer shell making up the blast wave of the supernova remnant, with the lighter colored regions being the stripes. The upper panel shows a close-up of a region away from the stripes, where the black lines show tangled magnetic field lines and the red line shows an electron spiraling around one of these lines.  The middle panel shows a close-up of a faint stripe. Here, the magnetic fields are much more tangled and the particle motions are much more turbulent, producing higher energy X-ray emission. In the bright stripe the tangling of the magnetic fields and the turbulence is even higher. (Credit: NASA/CXC/M.Weiss)

However, the regular and almost periodic pattern of the X-ray stripes was not predicted by the theory.

These results were published in the Feb. 20th, 2011 issue of The Astrophysical Journal Letters. Other co-authors include Carles Badenes from Tel-Aviv University and the Weizmann Institute of Science in Israel, Robert Fesen from Dartmouth College, Parviz Ghavamian from Space Telescope Science Institute, Baltimore, David Moffett, from Furman University, Greenville, S.C., Paul Plucinsky and Patrick Slane from the Harvard-Smithsonian Center for Astrophysics, Cambridge, Mass., Cara Rakowski from the Naval Research Laboratory, Washington, D.C., and Estela M. Reynoso from the Institute of Astronomy and Space Physics and University of Buenos Aires, Argentina.