When it comes to medical research, the obvious payoff is lives saved. In physics research, the payoff usually is more abstract, such as a greater understanding of atomic structure or the mysteries of the universe. But sometimes, spin-offs from basic physics research can yield tangible benefits to humanity in unexpected ways.

Recently, the National Institutes of Health recognized the medical potential in a grant proposal written by astrophysicist Eric Silver of the Smithsonian Astrophysical Observatory in Cambridge, Mass. Of 21,000 proposals submitted to the NIH Challenge Program, only 200 received funding. One was Silver’s. 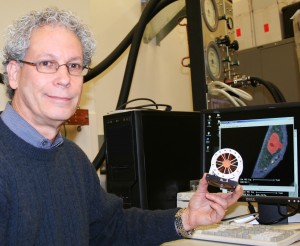 Photo left: Eric Silver holds a prototype X-ray mirror, which focuses incoming X-rays onto a nearby detector, creating images like the cell shown on the computer screen. (Click to enlarge)

Silver is pursuing innovative and interdisciplinary uses of his technique for chemical imaging at the cellular level. Practical benefits may someday come from the prototype instrument he and his colleagues have developed–a combination X-ray detector and electron microscope that will make chemical maps of living cells.

“We are adapting techniques from X-ray astronomy for use in down-to-Earth applications,” Silver says.

An X-ray is a type of very energetic light. Cosmic X-rays are produced by violent phenomena such as exploding stars, which blast out gases heated to millions of degrees. Astronomers detect X-rays with instruments like those on board the Chandra X-ray Observatory, some of which can determine the composition of the hot gas. 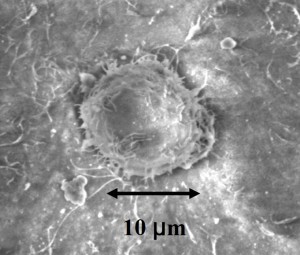 Photo right: This electron microscope image of a single cancer cell shows it scale in microns (millionths of a meter).

Silver recognized that the technologies used to study giant supernova remnants and other X-ray-emitting celestial objects, could also be used to examine cells chemically.

The secret is to unite an electron microscope with a sensitive X-ray detector. Silver’s detector can simultaneously distinguish one chemical element from another more capably than any other instrument.

In his technique, an electron microscope bombards a cell sample with negatively charged, subatomic particles. Chemical elements within the cell react by emitting X-rays, which are collected to form an image of the cell. Since different chemical elements emit X-rays of different energies, Silver can map the composition of the cell with higher precision than was possible previously.

Silver is particularly interested in studying cancer cells in hopes that the information gained will help improve treatments. His technique should show how chemotherapy affects cancer by letting researchers see exactly where anti-cancer drugs go within cells. It may also distinguish between healthy and diseased cells. 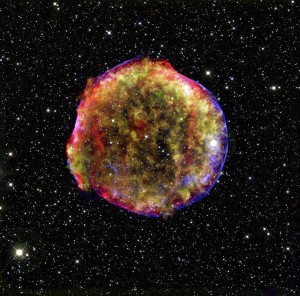 Image right:  This photograph of Tycho’s supernova remnant combines X-ray data (yellow, green, blue) from Chandra with infrared data (red) from the Spitzer Space Telescope. They are overlaid on an optical image (white stars) of the surrounding sky.

“The goal is to better understand the cell chemistry and metabolism, which could contribute to cancer diagnostics and possibly treatment,” says Silver.

Silver’s prototype has applications in other fields of research. For example, he has analyzed flakes of rock from the Allende meteorite. He also anticipates studying motes of comet dust from NASA’s Stardust mission, and archaeological artifacts and fine art objects in collaboration with scientists at the Smithsonian’s Museum Conservation Institute and National Museum of Natural History.

“As you can see, this new interdisciplinary tool is finding many uses,” Silver says. –Christine Pulliam

What does candied, microwaved sperm have to do with saving endangered species?