Phragmites australis, the common reed, has been a component of North American marshes for thousands of years. However, a novel genetic lineage, Phragmites australis australis, found its way to North America sometime in the 1800s, scientists believe, probably hiding in plain site as discarded packing material. Its next decades were then spent quietly growing in estuaries and coastal marshes in North America, a minor player in the community of marsh plants, attracting little more than passing notice by wetland scientists.

Suddenly, some 20 years ago in a Jekyll-and-Hyde-like scenario common among invasive plants and animals, this once humble reed “just took off,” says Patrick Megonigal of the Smithsonian Environmental Research Center in Edgewater, Md. Today it is an aggressive invader pushing into the tidal and non-tidal wetlands of North America and vigorously replacing native plants, including its very close native genotype Phragmites australis americanus. 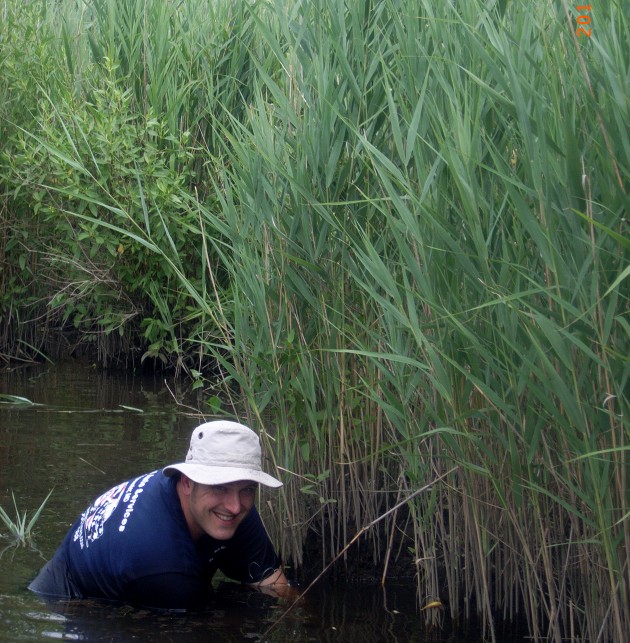 Image above: Ecologist Thomas Mozdzer, former Smithsonian Post-Doctoral Fellow, works beside a patch of invasive Phragmites australis at SERC’s Global Change Research Wetland. There, scientists are manipulating CO2 and nitrogen levels to mimic the world of 2100 if climate change continues as expected. (All photos courtesy of SERC)

Now, a new study by Megonigal and lead author Thomas Mozdzer of Bryn Mawr College, that takes a close look at the biogeochemistry of this invasive plant and its native North American counterpart, reveals how a subtle genetic difference in the lineage of a plant species can have a major impact on greenhouse gas emissions.

The scientists found that invasive Phragmites emits much higher levels of methane (CH4) than native Phragmites, and both emit more methane when grown under predicted future levels of atmospheric carbon dioxide and nitrogen. As methane is a principle greenhouse gas, these findings, Megonigal says, have the potential to negate the use of tidal wetlands inundated with this invasive reed as an asset in carbon offset credit systems. 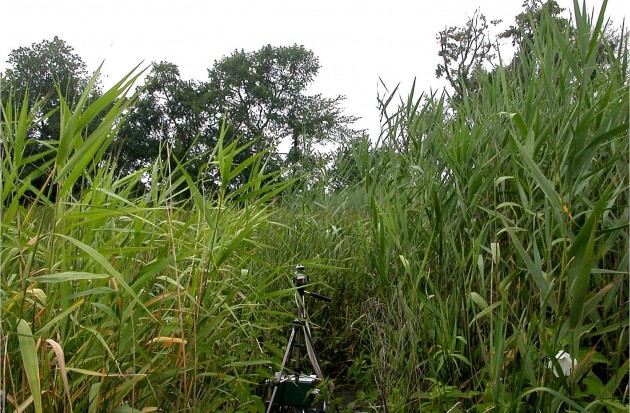 Image above: Native and Introduced Phragmites: Native Phragmites (left) and invasive Phragmites (right). The invasive strain of Phragmites australis from Europe is one of the most rampant plant invaders in the eastern U.S. It can grow up to 15 feet tall and monopolizes light and nutrients, preventing any other plants from surviving in its shadow.

“Tidal wetlands store carbon at very impressive rates that are comparable to a rainforest,” Megonigal explains. “They take carbon out of the atmosphere as carbon dioxide (CO2) and turn it into biomass that ends up being stored in the soil as roots or detritus, which is good for the climate. The flip side is that these systems also emit methane.” Overall, however, there is a balance of carbon intake and methane emission in many native tidal wetlands that equals a net benefit for the climate.

Not necessarily so with Phragmites australis, Megonigal says. “When Phragmites australis invades, it has the potential to upset this balance by increasing methane emissions.” Higher levels of atmospheric carbon dioxide and nitrogen also made this plant much more vigorous, a related study showed.

This information is important for people interested in using protected wetlands as credits in carbon offset systems. In order to comply with agreed upon limits to the amount of carbon dioxide they are permitted to emit, governments and companies can buy, sell and trade these credits, which can take the form of protected forests, wetlands and other natural areas that hold or sequester large amounts of carbon.

Image above: Native Phragmites (left) and invasive Phragmites (right). The invasive strain of Phragmites australis from Europe is one of the most rampant plant invaders in the eastern U.S. It can grow up to 15 feet tall and monopolizes light and nutrients, preventing any other plants from surviving in its shadow.

“Invasive Phragmites does not have the potential to vastly increase the emissions of methane globally,” Megonigal points out. “The increase in methane that we are experiencing today is mostly due to anthropogenic sources.

“Still, we suspect that as the climate changes natural sources of methane emissions will begin to increase for a variety of reasons. Our paper shows that one of those reasons could be the introduction of new, novel species that support higher rates of methane production.” –John Barrat

“Increased Methane Emissions by an Introduced Phragmites australis Lineage under Global Change” appeared in the journal Wetlands in May 2013.