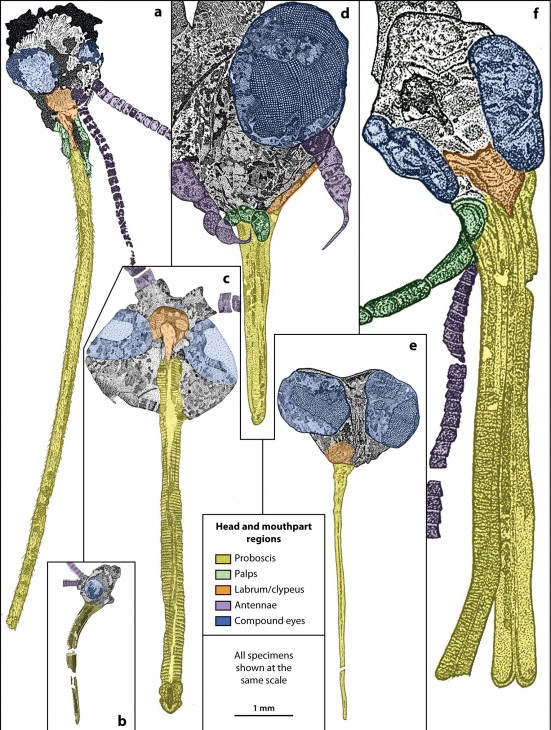 These striking images of six insect heads and mouthparts were drawn from fossils by Conrad Labandeira, Curator of Fossil Arthropods (insects and related animals) at the Smithsonian’s National Museum of Natural History for a new paper written with former Department of Paleobiology graduate student Ellen Currano. The paper reviews the fossil evidence for evolving relationships between insects and plants over the last 450 million years, including these 165 million-year-old fossil insects with mouthparts adapted for feeding on plant fluids.  Each fossil preserves a tube-shaped proboscis, shown in yellow, that functioned like a flexible straw.  This distinctive type of proboscis also evolved in butterflies, flies, lacewings and several other unrelated groups of insects – a phenomenon called convergent evolution.

Conrad uses a microscope with a special attachment, called a camera lucida, to make enlarged and precise renderings of the fine structures sometimes preserved in insect and plant fossils.  Below is an example from an earlier publication. The photo on the left shows a fossil scorpionfly with a proboscis.  The accompanying pair of camera lucida drawings magnifies the head and proboscis (center) and, at still higher magnification, details the structures at the proboscis tip (right), including the central tube and two sponging pads on each side.

This illustration is from “The Fossil Record of Plant-Insect Dynamics“ in the Annual Review of Earth and Planetary Sciences, by Conrad C. Labandeira and Ellen D. Currano.