This composite image of a galaxy illustrates how the intense gravity of a super massive black hole can be tapped to generate immense power. The image contains X-ray data from NASA’s Chandra X-ray Observatory (blue), optical light obtained with the Hubble Space Telescope (gold) and radio waves from the NSF’s Very Large Array (pink). 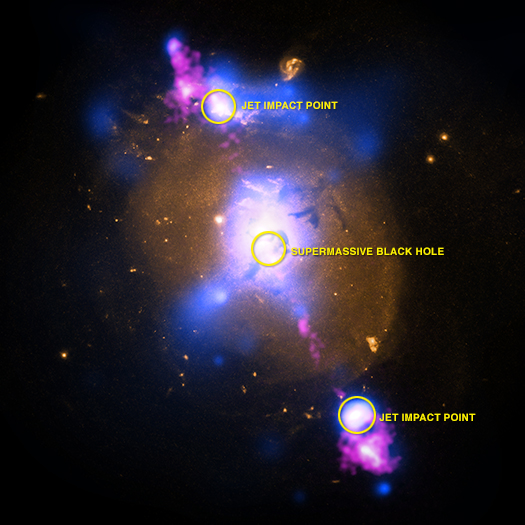 This multi-wavelength view shows 4C+29.30, a galaxy located some 850 million light years from Earth. The radio emission comes from two jets of particles that are speeding at millions of miles per hour away from a super massive black hole at the center of the galaxy. The estimated mass of the black hole is about 100 million times the mass of our Sun. The ends of the jets show larger areas of radio emission located outside the galaxy.

The X-ray data show a different aspect of this galaxy, tracing the location of hot gas. The bright X-rays in the center of the image mark a pool of million-degree gas around the black hole. Some of this material may eventually be consumed by the black hole, and the magnetized, whirlpool of gas near the black hole could in turn, trigger more output to the radio jet. 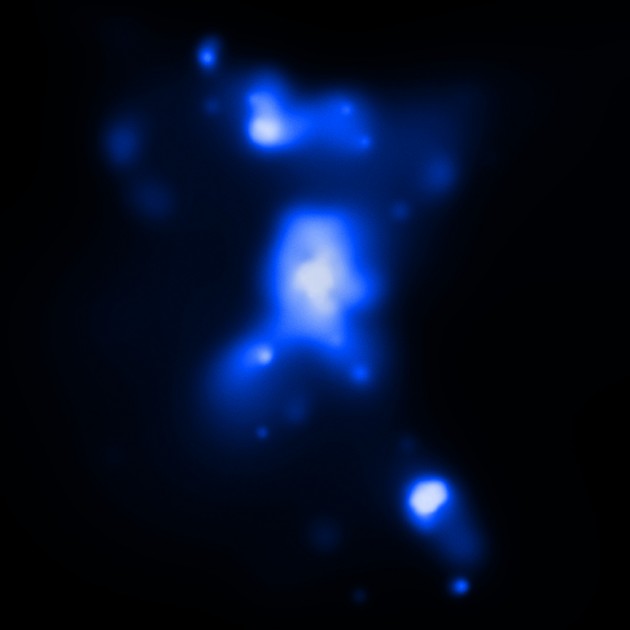 The bright spots in X-ray and radio emission on the outer edges of the galaxy, near the ends of the jets, are caused by extremely high energy electrons following curved paths around magnetic field lines. They show where a jet generated by the black hole has plowed into clumps of material in the galaxy (mouse over the image for the location of these bright spots). Much of the energy of the jet goes into heating the gas in these clumps, and some of it goes into dragging cool gas along the direction of the jet. Both the heating and the dragging can limit the fuel supply for the super massive black hole, leading to temporary starvation and stopping its growth. This feedback process is thought to cause the observed correlation between the mass of the super massive black hole and the combined mass of the stars in the central region or bulge of a galaxy.

These results were reported in two different papers. The first, which concentrated on the effects of the jets on the galaxy, is available online and was published in the May 10, 2012 issue of The Astrophysical Journal. It is led by Aneta Siemiginowska from the Harvard-Smithsonian Center for Astrophysics (CfA) in Cambridge, MA and the co-authors are Lukasz Stawarz, from the Institute of Space and Astronautical Science in Yoshinodai, Japan; Teddy Cheung from the National Academy of Sciences in Washington, DC; Thomas Aldcroft from CfA; Jill Bechtold from University of Arizona in Tucson, AZ; Douglas Burke from CfA; Daniel Evans from CfA; Joanna Holt from Leiden University in Leiden, The Netherlands; Marek Jamrozy from Jagiellonian University in Krakow, Poland; and Giulia Migliori from CfA. The second, which concentrated on the supermassive black hole, isavailable online and was published in the October 20, 2012 issue of The Astrophysical Journal. It is led by Malgorzata Sobolewska from CfA, and the co-authors are Aneta Siemiginowska, Giulia Migliori, Lukasz Stawarz, Marek Jamrozy, Daniel Evans, and Teddy Cheung.