A fiery explosion on the surface of the Moon, visible to the naked eye, recently surprised NASA astronomers monitoring the Moon for meteorite strikes. Occurring March 17 it was the biggest explosion in the 8-year history of NASA’s Lunar Impact Monitoring program that shoots continual video of the Moon through 14-inch telescopes on Earth. NASA announced the event on May 17 after an analyst noticed the strike on a digital video. Scientists estimate the meteor weighed 88 pounds, was about 16 inches wide, and hit the moon at 56,000 miles per hour. 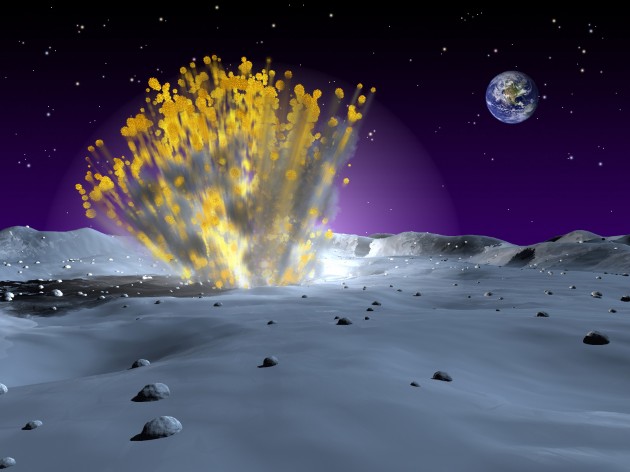 An artist’s rendering of a small but powerful meteor strike on the Moon. (Steve Roy, Marshall Space Flight Center)

In this Q&A Smithsonian Geophysicist Bruce Campbell, of the Air and Space Museum’s Center for Earth and Planetary Studies, answers a few questions about the explosion and the geologic processes that shape the Moon’s surface. For years Campbell has been using radio telescopes to see through the Moon’s thick layer of dust and debris and create a detailed radar map of the Moon’s ancient bedrock topography.

Q: Can the crater caused by this impact be seen from Earth?

Campbell: No. Based on the brightness of the flash researchers estimate the crater to be about 20 meters across, which is too small to be seen with a telescope from Earth. The Lunar Reconnaissance Orbiter [a NASA spacecraft currently orbiting the Moon] however will be able to see the crater when it passes over that area of the Moon sometime later this year. The Orbiter, which can see features down to about one-half meter in size, should be able to take a really nice image of the crater. It will be easy to spot as it should have a wide and bright spray of ejected material surrounding it.

These false-color frames extracted from the original black and white video show the explosion from the March 17 meteorite impact on the Moon in progress. At its peak, the flash was as bright as a 4th magnitude star.

Q: How deep is the Moon’s dust at the spot where this meteorite hit?

Campbell: In this area [a region known as Mare Imbrium] the dust layer is easily anywhere from 15 to 25 feet deep. It’s a very thick layer and I don’t think this meteorite was big enough to have punched through all that dust to reach the Moon’s bedrock. The energy of the explosion pushed the dust and other material upward and outward in large parabolic arcs. On Earth atmospheric drag would slow the dust making it fall at a much shorter distance from the crater than on the Moon.

Q: Did the meteorite sink into the Moon’s dust or break apart?

Campbell: Almost no recognizable large chunk of a meteorite like this one is going to survive. It hits the ground at such a speed that you actually get a shockwave inside the meteorite. The shockwave starts at the front where the meteorite hits and by the time it reaches the back of the meteorite it explodes. And so the meteorite is spread out all over that deposit of material, some in the crater itself and a lot in the spray of material around the crater. 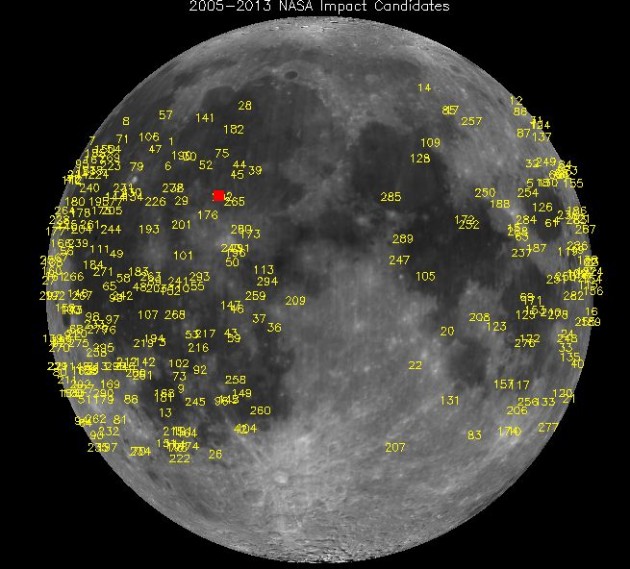 NASA’s lunar monitoring program has detected hundreds of meteoroid impacts. The brightest, detected on March 17, 2013, in Mare Imbrium, is marked by the red square.

Q: With no wind or water on the Moon to cause erosion, is this crater now a permanent feature of the Moon?

Campbell: There is erosion on the Moon which is coming from the exact process that caused this new crater. Think about it, that new 20-meter crater obliterated all the little craters that were in that spot before it. And it threw out dust that covered up and smoothed out other areas.

But even when fresh bedrock from beneath the dust is exposed by very large meteorite strikes, these new rocks are eventually broken down by the little bits of space dust zipping in and striking the Moon day in and day out. In general, these tiny particles are traveling extremely fast. Most hit the ground at 2 kilometers per second or more. Even a particle of dust that’s moving at several kilometers per second will break a pretty good chunk off a rock on the ground.

Undetectable from Earth, these little particles are the dominant erosive effect on the Moon…on a cosmic time scale these particles are just raining in. This crater is just part of that endless process of the soil gradually building up and rocks on the surface being broken down and craters being smoothed out. If you look at the pictures, the Moon’s features are very rounded with gentle slopes; there are almost no sharp-edged hills on the Moon.  –John Barrat