The uplift of the Isthmus of Panama 2.6 million years ago formed a land-bridge that has long thought to be the crucial step in the interchange of animals between the Americas. This includes the  movement of armadillos and giant sloths up into North America, and the relatives of modern horses, rabbits, foxes, pigs, cats, dogs, and elephants down into South America. 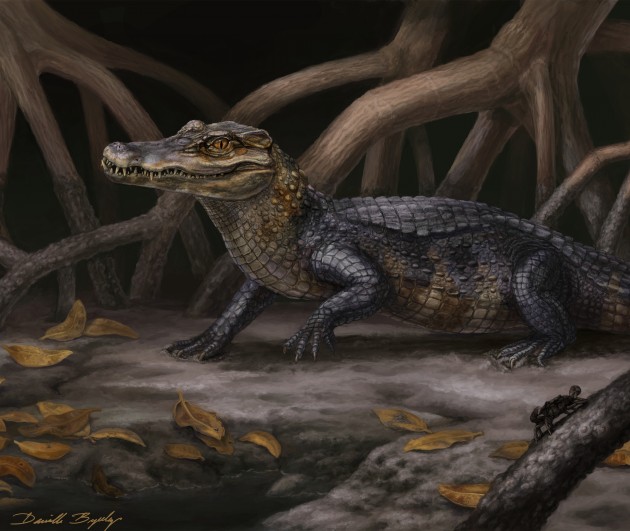 This image shows a life reconstruction of Culebrasuchus mesoamericanus, gen. et sp. nov., in its ancient near coastal environment during the early Miocene of Panama. (Original artwork by Danielle Byerley © Florida Museum of Natural History)

However, in the March 2013 issue of the Journal of Vertebrate Paleontology, researchers from the University of Florida and the Smithsonian Tropical Research Institute describe fossil crocodilians that shed a surprising new light on the history of interchange and animal distributions between the Americas.

The fossils are partial skulls of two new species of caiman, relatives of alligators, who live exclusively in South America today. They were discovered in rocks dated from 19.83 and 19.12 million years old and that were exposed by excavations associated with the expansion of the Panama Canal.

“These are the first fossil crocodilian skulls recovered from all of Central America. They fill a gap in evolution between the alligators of North America and the caimans of South America. It’s quite incredible.” says lead author Alex Hastings, a fossil crocodilian specialist at Georgia Southern University.

The presence of the fossils in Panama indicates that caimans dispersed North from South America by the early Miocene, which is over 10 million years earlier than the spread of mammals. This discovery is additionally important because caimans lack the ability to excrete excess salt from their bodies and are restricted to freshwater environments. As a result, they could have only dispersed a short distance across sea water, which supports a recent hypothesis that Central and South America were much closer to each other 19 million years ago than previously thought, and paints a new picture of the past histories of American animals.

“We are starting to understand that while the mammals in Panama 19-21 million years ago were very similar to those found in Mexico, Texas, and Florida at that time, the reptiles tell a different story,” says co-author Jonathan Bloch, a vertebrate paleontologist at the Florida Museum of Natural History. “Somehow, they were able to cross over from South America when it was completely isolated by seaways—this is one of the mysteries that will drive future inquiry and research in this region.”