Did an ancient crocodile relative give the world’s largest snake a run for its money?

In a new study  in the journal Palaeontology, University of Florida and Smithsonian Tropical Research Institute scientists describe a new 20-foot extinct species discovered in the same Colombian coal mine with Titanoboa, the world’s largest snake. The findings help scientists better understand the diversity of animals that occupied the oldest known rainforest ecosystem, which had higher temperatures than today, and could be useful for understanding the impacts of a warmer climate in the future.

The 60-million-year-old freshwater relative to modern crocodiles is the first known land animal from the Paleocene New World tropics specialized for eating fish, meaning it competed with Titanoboa for food. But the giant snake could have consumed its competition, too, researchers say.

This illustration shows how Acherontisuchus guajiraensis, a 60-million-year-old ancestor of crocodiles, would have looked in its natural setting. Titanoboa, the world’s largest snake, is pictured in the background. (Illustration by Danielle Byerley)

“The younger individuals were definitely not safe from Titanoboa, but the biggest of these species would have been a bit much for the 42-foot snake to handle,” said lead author Alex Hastings, a graduate student at the Florida Museum of Natural History and UF’s department of geological sciences.

The new species is a dyrosaurid, commonly believed to be primarily ocean-dwelling, coastal reptiles. The new adult specimens challenge previous theories the animals only would have entered freshwater environments as babies before returning to sea.

Fossils of a partial skeleton of the species, Acherontisuchus guajiraensis, show dyrosaurids were key players in northeastern Colombia and that diversity within the family evolved with environmental changes, such as an asteroid impact or the appearance of competitors from other groups, said Christopher Brochu, an associate professor of vertebrate paleontology in the department of geoscience at the University of Iowa, who was not involved in the study. 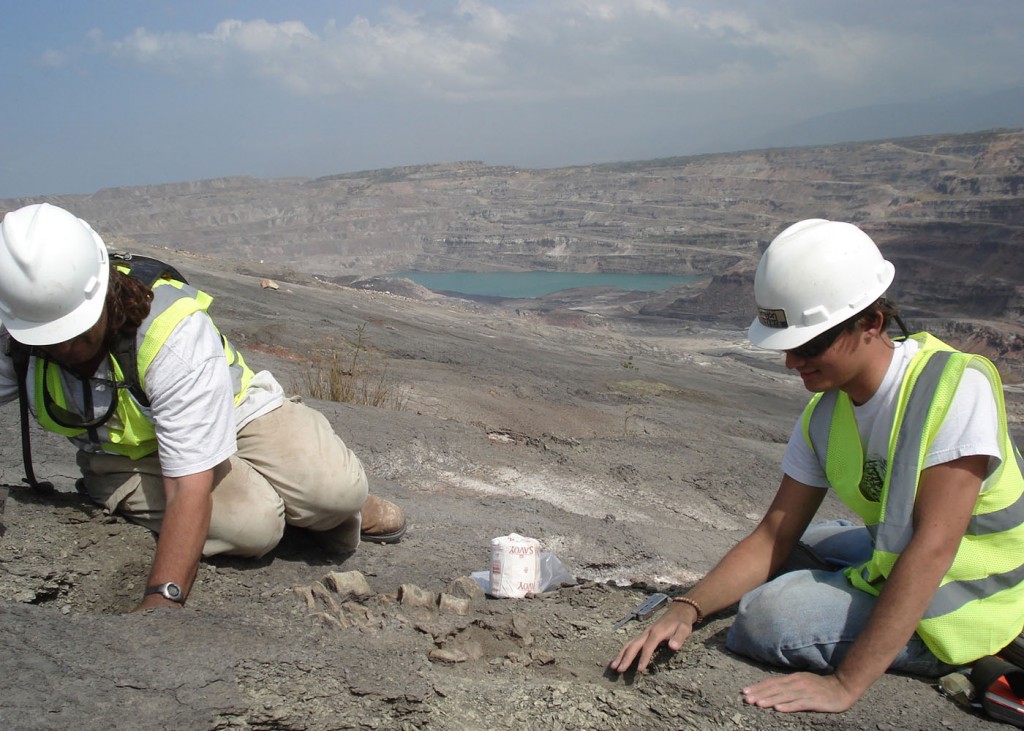 University of Florida researchers unearth fossils from the 60-million-year-old Cerrejon formation in northeastern Colombia, one of the world’s largest open-pit coal mines. (Photo by Edwin Cadena)

“We’re facing some serious ecological changes now,” Brochu said. “A lot of them have to do with climate and if we want to understand how living things are going to respond to changes in climate, we need to understand how they responded in the past. This really is a wonderful group for that because they managed to survive some catastrophes, but they seemed not to survive others and their diversity does seem to change along with these ecological signals.”

The species is the second ancient crocodyliform found in the Cerrejon mine of northern Colombia, one of the world’s largest open-pit coal mines. The excavations were led by study co-authors Jonathan Bloch, Florida Museum associate curator of vertebrate paleontology, and paleobotanist Carlos Jaramillo of the Smithsonian Tropical Research Institute.

“This one is related to a group that typically had these long snouts” Hastings said. “It would have had a relatively similar diet to the other (coastal) species, but surprisingly it lived in a more freshwater environment.”

The genus is named for the river Acheron from Greek mythology, “the river of woe,” since the animal lived in a wide river that emptied into the Caribbean. Unlike the first crocodile relative found in the area, which had a more generalized diet, the snout of the new species was long, narrow and full of pointed teeth, showing a specialization for hunting the lungfish and relatives of bonefish that inhabited the water. 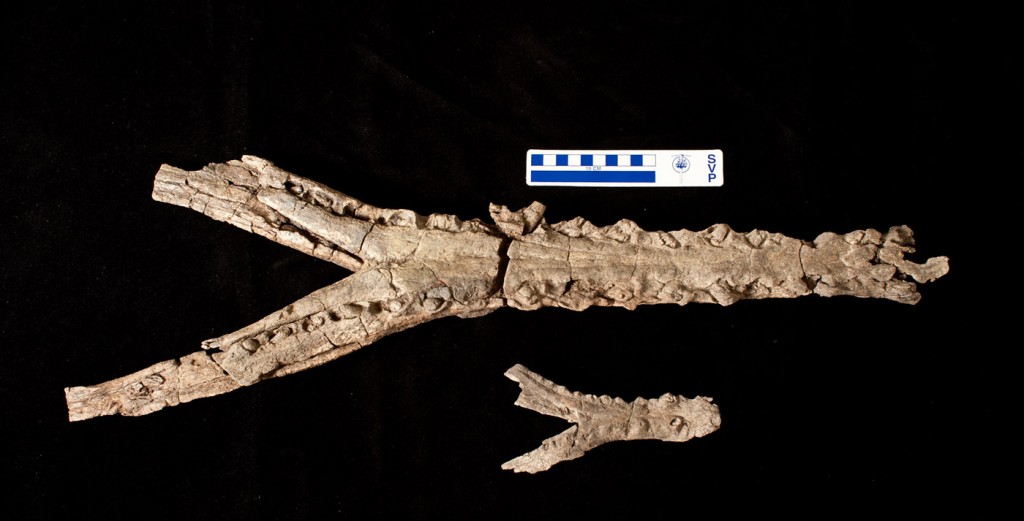 This photograph shows the size difference in the jawbones of two 60-million-year-old crocodile ancestors found in northeastern Colombia by University of Florida researchers.The newly described Acherontisuchus guajiraensis, top, and Cerrejonisuchus improcerus, bottom. C. improcerus was the first ancient crocodyliform found in the Cerrejon open-pit coal mine. The new species is the first known land animal from the Paleocene New World tropics specialized for eating fish. (Photo by Kristen Grace)

“The general common wisdom was that ancestrally all crocodyliforms looked like a modern alligator, that all of these strange forms descended from a more generalized ancestor, but these guys are showing that sometimes one kind of specialized animal evolved from a very different specialized animal, not a generalized one,” Brochu said. “It’s really showing us a level of complexity to the history that 10 years ago was not anticipated.”

During the Paleocene in South America, the environment was dominated by reptiles, including giant snakes, turtles and crocodiles. The dyrosaurid family originated in Africa about 75 million years ago, toward the end of the age of dinosaurs, and arrived in South America by swimming across the Atlantic Ocean.

“The same thing that snuffed out the dinosaurs killed off most of the crocodiles alive at the time,” Hastings said. “The dyrosaurids are one of the few groups to survive the extinction and later become more successful.”