Catalina Suarez Gomez made the type of discovery that most scientists only dream about – and she did it while interning at the Smithsonian Tropical Research Institute. In 2010 while in Panama, Suarez Gomez was part of a team collecting fossils and geological information along the Panama Canal and in Colombia, including Titanoboa specimens. Titanoboa is the world’s largest-known prehistoric snake that scientists estimate slithered around the earth 60 million years ago. Paleontologists had found vertebrae and ribs of a Titanoboa on previous excavations, which allowed them to estimate the massive size of the snake and do inferences on the climate conditions when it was alive. But in order to get additional information about this animal, they needed more. 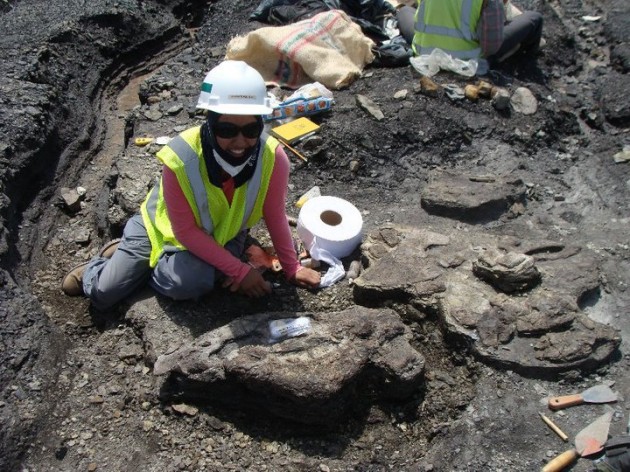 Smithsonian intern Catalina Suarez Gomez excavating a fossil in the Cerrejón coal mine in Colombia.

While on a field trip with five paleontologists in the Cerrejón coal mine in Colombia, geologist Gersom Garcia alerted Suarez Gomez and biologist Jorge Moreno to additional Titanoboa bones discovered on a walk. As Suarez Gomez describes it, “We took a closer look and there were some different fragments, neither ribs nor vertebrae. My heart started beating so fast. I could not believe what I was seeing. I looked at Jorge’s face and he looked at me.  ‘You know what this is, right?,’ he asked. ‘YES!,’ I told him excitedly. ‘These are skull fragments of a snake!,’ he said.  ‘Yes! A huge snake!,’ I said. His smile was huge and he said: ‘Catalina, we found it. Finally….This is the skull of Titanoboa!’” 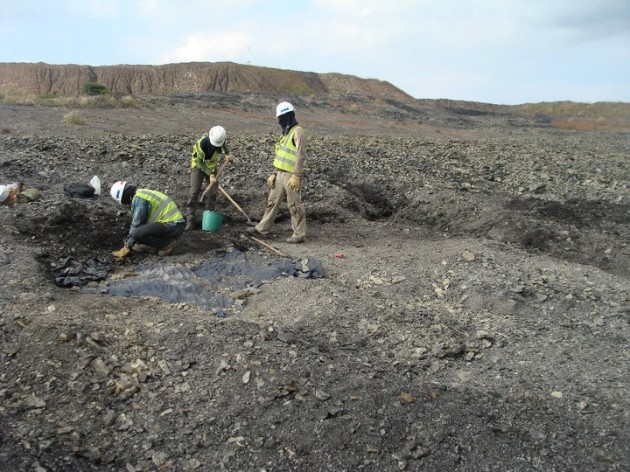 A Smithsonian team excavates a crocodile fossil in the Cerrejón coal mine in Colombia.

“Finding the skull of a snake is like looking for needle in a haystack as the bones are very small and do not hold together as a human skull does,” said Carlos Jaramillo, a research biologist at the Smithsonian Tropical Research Institute who oversaw Suarez Gomez’s work. “You have to have an acute observation skill. I was very impressed that Catalina was able to find it. The skull provides an unparalleled source of information to understand the anatomy and function of Titanoboa.”

Finding Titanoboa’s skull fragments allowed scientists to confirm the size and weight of the massive snake – 42 feet long and one ton – and better understand its feeding mechanisms, behavior and the environment in which it lived. With this information, the Smithsonian in association with its research partners, University of Florida and University of Nebraska, was able to create a life-size model of the snake and send it around the country as part of its traveling exhibition series.

Now in her second year at the Universidad Nacional de La Plata in Argentina for a PhD in paleontology, Suarez Gomez considers the Smithsonian a game-changer. “My time at the Smithsonian was one of the best chapters of my life,” Suarez Gomez said. “I was not only working on paleontology, but I also could know kind and smart people from many cultures and countries. I had everything I needed: many academic and physical resources, support from the best scientists and kind people around.”

“I think the Smithsonian was a breaking point in my life,” she continued. “Now, my life is divided in 2 parts: BS (Before Smithsonian) and AS (After Smithsonian). And I think the ‘AS’ part could be pretty much the best part. Being a former Smithsonian intern has opened many doors for me.”

To learn more about internship and fellowship opportunities at the Smithsonian, visit http://www.smithsonianofi.com/.