The western long-beaked echidna, one of the world’s five egg-laying species of mammal, became extinct in Australia thousands of years ago…or did it? Smithsonian scientists and colleagues have found evidence suggesting that not only did these animals survive in Australia far longer than previously thought, but that they may very well still exist in parts of the country today. The team’s findings were published in the Dec. 28, 2012 issue of the journal ZooKeys. 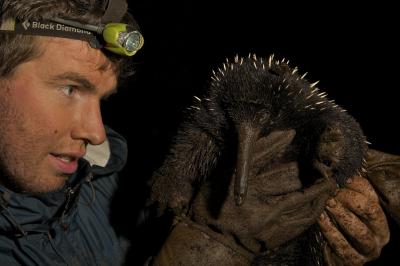 Scientist Kristofer Helgen, Smithsonian Institution, examines a long-beaked echidna in the wild on the island of New Guinea, where a small and declining population of the species is still known to exist. (Photos by Tim Laman)

With a small and declining population confined to the Indonesian portion of the island of New Guinea, the western long-beaked echidna (Zaglossus bruijnii) is listed as “Critically Endangered” on the International Union for Conservation of Nature’s Red List of Threatened Species. It is also considered extinct in Australia, where fossil remains from the Pleistocene epoch demonstrate that it did occur there tens of thousands of years ago. Ancient Aboriginal rock art also supports the species’ former presence in Australia. However, no modern record from Australia was known to exist until scientists took a closer look at one particular specimen stored in cabinets in the collections of the Natural History Museum in London. Previously overlooked, the specimen’s information showed that it was collected from the wild in northwestern Australia in 1901―thousands of years after they were thought to have gone extinct there. 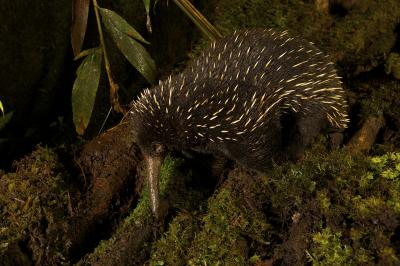 Image above: The western long-beaked echidna, one of the world’s five egg-laying species of mammal, was thought to be extinct in Australia. However scientists have found evidence that it may still roam the country’s north-western region.

“Sometimes while working in museums, I find specimens that turn out to be previously undocumented species,” said Kristofer Helgen of the Smithsonian Institution, the lead author and the scientist to first report the significance of the echidna specimen. “But in many ways, finding a specimen like this, of such an iconic animal, with such clear documentation from such an unexpected place, is even more exciting.”

The re-examined specimen in London reveals that the species was reproducing in Australia at least until the early 20th century. It was collected in the West Kimberley region of Western Australia by naturalist John T. Tunney in 1901, on a collecting expedition for the private museum of Lord L. Walter Rothschild in England. Despite collecting many species of butterflies, birds and mammals (some new to science at the time), no full report on his specimens has ever been published. The collection, including the long-beaked echidna specimen, was then transferred to the Natural History Museum in London in 1939 after Rothschild’s death. It was another 70 years before Helgen visited the museum in London and came across the specimen with the original Tunney labels, which both challenged previous thinking about the species’ recent distribution and offered insight into where it may still occur.

“The discovery of the western long-beaked echidna in Australia is astonishing,” said Professor Tim Flannery of Macquarie University in Sydney, referring to the new study. “It highlights the importance of museum collections, and how much there is still to learn about Australia’s fauna.”

Learning whether the western long-beaked echidna still exists in Australia today will take time. “The next step will be an expedition to search for this animal,” Helgen said. “We’ll need to look carefully in the right habitats to determine where it held on, and for how long, and if any are still out there.” To find it, Helgen hopes to draw on his experience with the species in New Guinea and to interview those who know the northern Australian bush best. “We believe there may be memories of this animal among Aboriginal communities, and we’d like to learn as much about that as we can,” he said.

With the species in danger of extinction, finding Australian survivors or understanding why and when they vanished is an important scientific goal. “We hold out hope that somewhere in Australia, long-beaked echidnas still lay their eggs,” said Helgen. –Johnny Gibbons