New count reveals scrub-jay on Santa Cruz Island is among rarest bird species in the U.S. 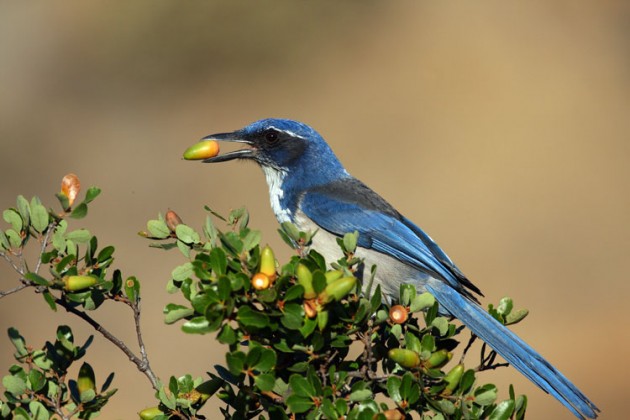 Smithsonian Conservation Biology Institute scientists and collaborators have found that the island scrub-jay’s population on Santa Cruz Island—its only habitat—is significantly smaller than previously believed and that it is therefore at greater risk of extinction. According to the study, published in the October issue of Ecological Applications, the previous estimate of 12,500 birds is five times larger than the actual population and the new data make the jay one of the 10 rarest songbird species in the continental United States. While the number of birds on the island is lower, the researchers estimate that the island scrub-jay population has actually grown between 20 and 30 percent over the last few decades.

“If you’re trying to manage populations or conserve them, first you need to know how many there are,” said Scott Sillett, SCBI researcher and lead author of the paper. “Without good information, conservation resources could be wasted or important populations overlooked.”

The researchers counted jays from 307 points on Santa Cruz Island. Using vegetation maps, they found that jays were most abundant in upper- to mid-elevation plant communities that are dominated by island scrub-oak. Because the birds are harder to detect in denser habitats, the scientists were not able to physically count every jay. Instead they used an extended statistical model that provided an unbiased estimate of the jay population. Incomplete sampling led to the incorrect earlier estimates, according to Sillett.

The statistic model also allowed the scientists to estimate previous populations based on vegetation maps from 1985. They found that although the island scrub-jays are rarer than thought, the removal of non-native sheep, pigs and cows that destroy the birds’ habitat on the island has led to the increase in population.

“Citizens often hear conservation doom and gloom, but in this case we have both good news and a cautionary tale,” Sillett said. “The number of jays has increased in the past 30 years thanks to wise stewardship of the Santa Cruz Island by The Nature Conservancy and the U.S. National Park Service. I believe the island scrub-jay may have a brighter future.”

The innovative method to determine the abundance of this species can be applied to other animal species that may require conservation action. As a result of this research, the International Union for Conservation of Nature has changed the island scrub-jay’s status from near threatened to vulnerable. Potential threats to this jay’s small population include restricted island range, lack of genetic diversity, West Nile virus and loss of habitat to oak disease and wildfire.

In addition to Sillett, the paper’s authors are Richard B. Chandler and J. Andrew Royle from the U.S. Geological Survey, Marc Kéry from the Swiss Ornithological Institute and Scott A. Morrison from The Nature Conservancy.

The Smithsonian Conservation Biology Institute plays a key role in the Smithsonian’s global efforts to understand and conserve species and train future generations of conservationists. Headquartered in Front Royal, Va., SCBI facilitates and promotes research programs based at Front Royal, the National Zoo in Washington, D.C., and at field research stations and training sites worldwide