A new species of hangingfly with wings that perfectly mimic the multi-lobed leaf of an ancient ginkgo-like tree has been discovered in China by scientists from the Smithsonian’s National Museum of Natural History and the University of Maryland, as well as the College of Life Sciences at Capital Normal University, in Beijing. Exquisitely preserved in fossil sediments dating from the Middle Jurassic, the insect, newly named Juracimbrophlebia ginkgofolia, was discovered in 165 million-year-old deposits, as was the ginko-like tree, Yimaia capituliformis, the mimicked plant. 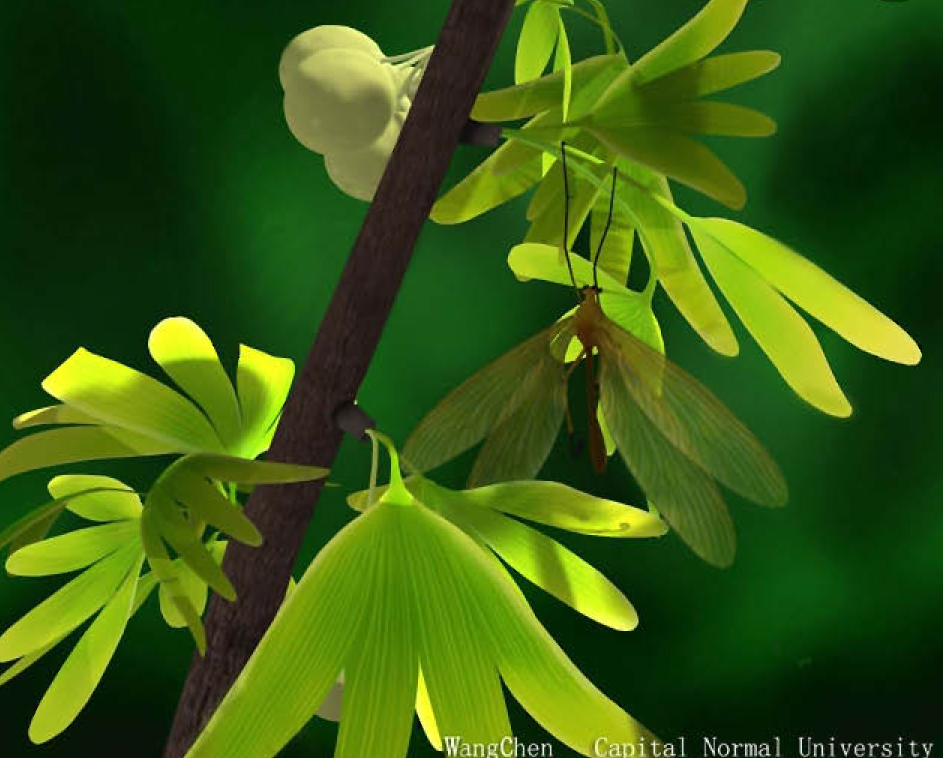 Reconstruction of J. ginkgofolia mimicking the leaves of Y. capituliformis. This relationship was beneficial for both the insect mimic and plant model. (Courtesy Chen Wang, Capital Normal University)

“The mimicry is so amazing that some 165 million years later it even fooled me as I was examining fossils from the field and at the lab in China,” says Conrad Labandeira, paleobiologist at the National Museum of Natural History and co-author of a paper on the discovery in the Proceedings of the National Academy of Sciences USA. Hanging down by its long forelegs from the bottom of a leaf petiole, the four long wings and body of J. ginkgofolia would have perfectly mimicked the five hanging lobes of a single ginkgo-like leaf.

Hangingflies are a subset of scorpionflies with long legs, narrow wings and a long thin body. (The body of the type specimen of this insect is 38.5 millimeters, or about 1.5 inches.). J. ginkgofolia, was found in deposits of the Jiulongshan Formation at Daohugou Village, in northeastern China’s Inner Mongolia, and represents a new genus and species. 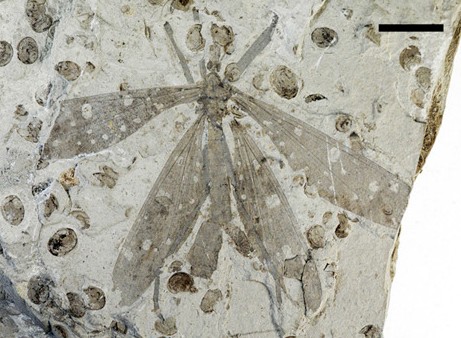 J. ginkgofolia’s shape and form most likely attracted smaller insects that fed upon the leaves of the ginkgo-like plant, which J. ginkgofolia would catch and eat, Labandeira explains. In this way the insect benefited from a reciprocal relationship with the tree, a relationship that the fossils indicate lasted about 1 million years. The ability of these insects to hide in plain-sight upon the leaves of the ginkgo-like tree also helped it avoid predators such as other insects, pterosaurs and small, tree-living dinosaurs and mammals. “This discovery is important because it is a rare example of insect mimicry modeled on a gymnosperm and not a flowering plant,” Labandeira says. “Virtually all of today’s examples of insect mimicry are modeled on flowering plants, the angiosperms. J. ginkgoflora, however, lived about 45-million years before the appearance of flowering plants, so this discovery gives us better idea of the early relationships between gymnosperms and this hangingfly insect group.” Although the ginkgo-like Y. capituliformis occurs in other geologic deposits, the hangingfly has not, Labandeira says. “They both probably went extinct at the end of the Jurassic.”