A specimen recently pulled from deep in the southwest Atlantic may represent a new species of squid, say scientist who have studied the animal’s unusual morphology. But then again, it may not… Scientists know so little about these deep-sea creatures that they are struggling to determine if the specimen is an unknown species or just a juvenile in a weird stage of growth. Two experts who reviewed a scientific paper detailing the specimen’s morphology reached opposite conclusions as to whether or not it was a new species.

The specimen’s appearance “doesn’t match what we know about the species we think it most resembles, Batoteuthis skolops,” says Michael Vecchione, a research zoologist at the Smithsonian’s National Museum of Natural History and co-author of the paper. “What we know about B. skolops, however, comes from a very few specimens in our museum collections.” B. skolops is known commonly as a “bush club” squid because it has tangled “bushes” of hundreds of suckers at the ends of its tentacles. 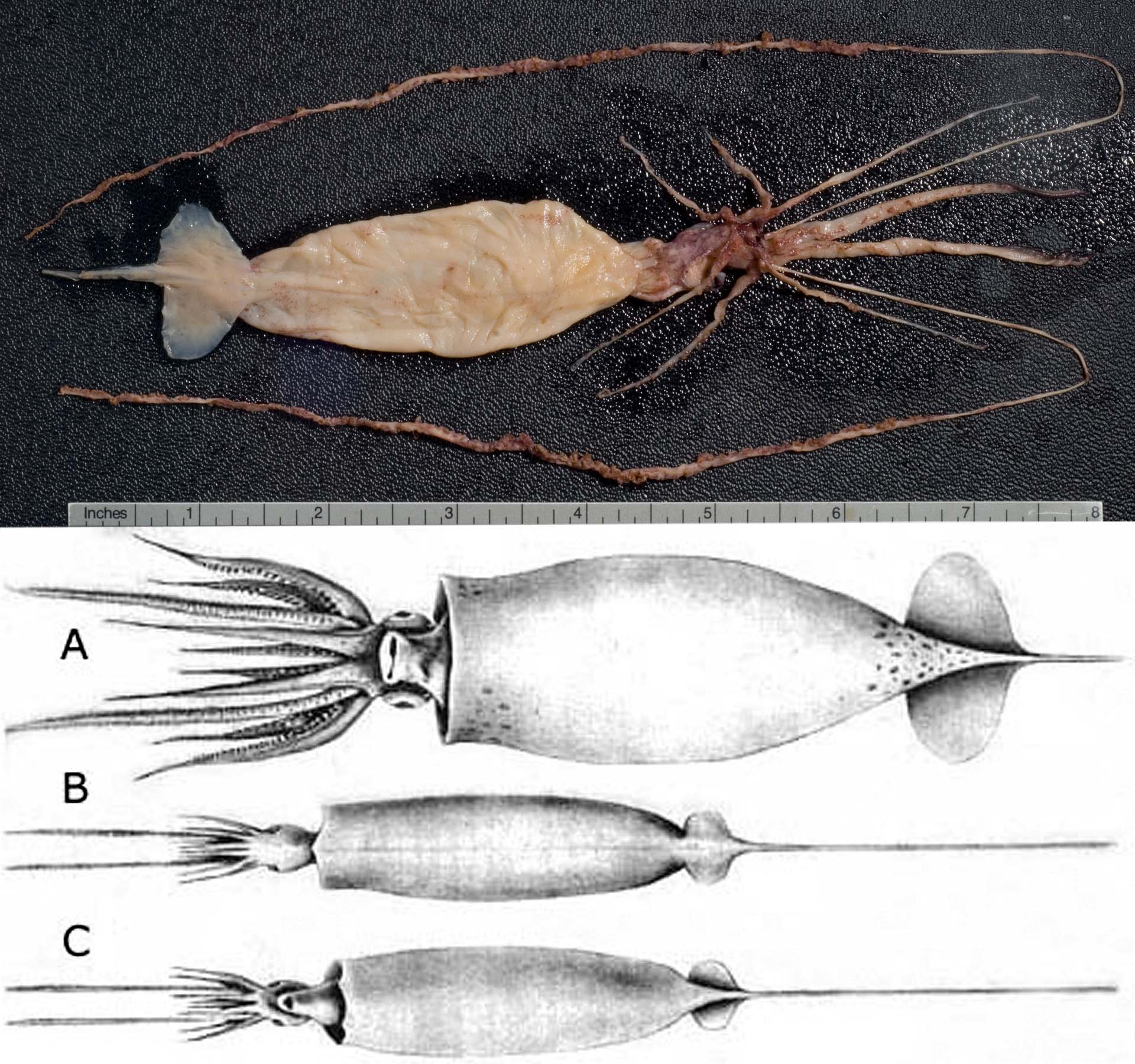 Above: This image shows the new squid specimen recently pulled up from the southwest Atlantic (top) and scientific illustrations of the squid species B. skolops, (A represents an adult in the illustration and B & C a juvenile). Note differences in tentacle length, fin shape and the length of the juvenile tail between the photograph and the illustrations. (Photo courtesy Mike Vecchione)

Because some squid undergo drastic changes in morphology as they mature, the scientists suspect the new specimen is a juvenile B. skolops in a pre-adult growth stage and not a new species, says Vecchione.

Yet the differences are dramatic, more so than what squid experts might expect a juvenile to exhibit. For example, the specimen has a much shorter tail, differently shaped fins and two tentacles that are remarkably longer than those of previously studied B. skolops specimens. The tentacles also are covered with hundreds more suckers. The new specimen also is drastically different in that it has large photophores (light emitting organs) on the tips of its ventral arms, as well as a zigzag array of suckers on these arms.

“We don’t really know what they use photophores for,” Vecchione says. “In some squids patterns of photophores like these are different between the sexes, so they might be used for sexual attraction, but it is all speculation at this point.”

Scientists estimate the life span of B. skolops to be one or maybe two years, “so they grow and change very fast” Vecchione says. “The really big changes in appearance these animals go through as they grow have caused a lot of taxonomic confusion in the past. So, we are being cautious at this point and guessing that this is not a new species.”