A July 12 news alert from NASA indicates a X1.4 class solar flare erupted from the center of the sun, peaking on Thursday, July 12 at 12:52 P.M. It erupted from the sun’s Active Region 1520 which rotated into view on July 6. There is a coronal mass ejection (CME) associated with this July 12 X-class flare. Rough estimates based on the data currently available–namely observations from the Solar Terrestrial Relations Observatory–show that the CME is traveling in an Earth direction at over 850 miles per second. For updates access the NASA Solar Dynamics Observatory News Web site.

NOAA’s Space Weather Prediction Center forecasters report they are “anticipating the passage of the coronal mass ejection around 1:00 a.m. EDT, Saturday, July 14. G1 (minor) Geomagnetic Storm activity is expected to then ensue through the rest of the day. An S1 (minor) Solar Radiation Storm is now occurring, also a consequence of the CME. The parent active region” of the sun appears to still be erupting, so more may be coming. For NOAA updates click here.

The following images of the solar flare were obtained by NASA’s Solar Dynamics Observatory and its Atmospheric Imaging Assembly instrument, a coordinated effort led by Lockheed Martin Solar and Astrophysics Laboratory and the Smithsonian Astrophysical Observatory. 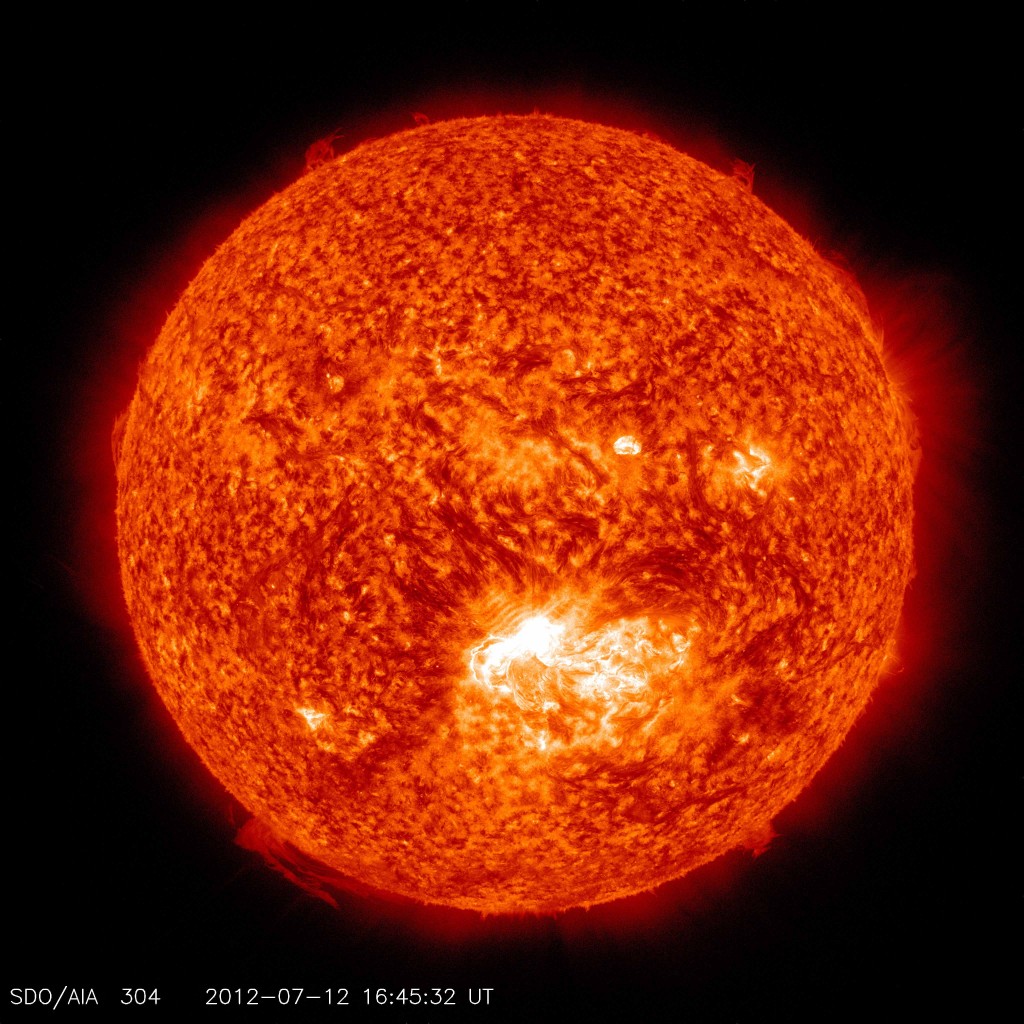 Above: This image from the Solar Dynamics Observatory shows the sun at 12:45 PM EDT on July 12, 2012 during an X1.4 class flare. The image is captured in the 304 Angstrom wavelength, which is typically colorized in red. (Credit: NASA/SDO/AIA) 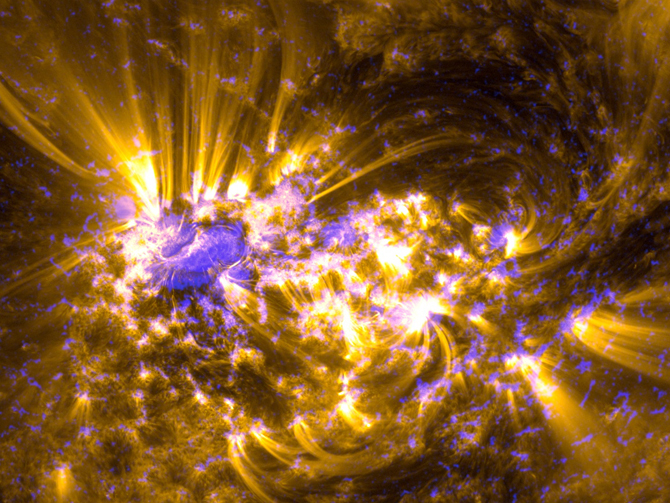 Above: This image combines two sets of observations of the sun at 10:45 AM EDT, July 12, 2012 from the Solar Dynamics Observatory to give an impression of what the sun looked like shortly before it unleashed an X-class flare beginning at 12:11 PM EDT. The image incorporates light in the 171 Angstrom wavelength, which shows off giant loops of solar material overlying the middle of the sun over Active Region 1520 where the flare originated. The second set of observations is called a magnetogram, which highlights magnetic fields on the sun. Together these kinds of observations can help scientists understand the magnetic properties of the sun that lead to giant explosions like flares.

This movie shows the sun July 10-12, ending with the X1.4 class flare on July 12, 2012. It was captured by NASA’s Solar Dynamics Observatory in the 131 Angstrom wavelength – a wavelength that is particularly good for viewing solar flares and that is typically colorized in teal. There is also a coronal mass ejection associated with this flare.

Sneak attacks from the Sun