Sneak attacks from the Sun

Our Sun can be a menace when it sends out powerful blasts of radiation towards the Earth. Astronomers keenly watch the Sun to learn more about what powers these eruptions, in hopes of being able to predict them. New research shows that one-third of the Sun’s blasts are “sneak attacks” that may occur without warning. 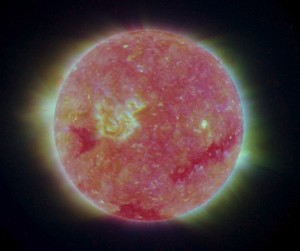 “If space weather forecasters rely on some of the traditional danger signs, they’ll miss a significant fraction of solar eruptions,” said Suli Ma of the Harvard-Smithsonian Center for Astrophysics.

To reach this conclusion, Ma and her colleagues studied 34 solar eruptions over 8 months using the STEREO spacecraft. STEREO allows astronmers to study the Sun from two different angles simultaneously. It consists of two spacecraft, one ahead of Earth in its orbit and the other trailing behind. The researchers used it to ensure that the events leaving the Sun were definitely on the side facing the Earth.

STEREO is ideal for studying coronal mass ejections, a huge eruption from the Sun that blasts a billion tons of highly charged particles into space at speeds greater than a million miles per hour. When those charged particles reach Earth, they interact with our planet’s magnetic field, potentially creating a geomagnetic storm. Such a storm can interfere with satellite communications, disrupt power grids, or even short out orbiting satellites.

Previous to STEREO, astronomers thought that all Earth-facing coronal mass ejections were accompanied by warning signals like flares (smaller explosions accompanied by high-energy radiation), coronal dimmings (darkening of the corona caused by discharge of matter in the mass ejection) or filament eruptions (long ribbons of plasma arching violently out from the solar surface). Therefore, by watching for those signals, we could potentially predict an impending eruption. 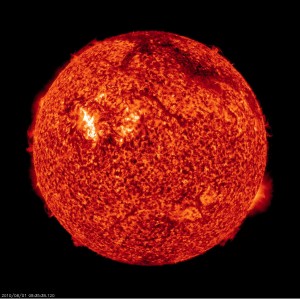 Image left: NASA’s Solar Dynamics Observatory snapped this X-ray photo of the Sun early in the morning of Sunday, August 1st. The dark arc near the top right edge of the image is a filament of plasma blasting off the surface – part of the coronal mass ejection. The bright region is an unassociated solar flare. (Image courtesy NASA)

This new research found that 11 of the 34 coronal mass ejections observed by STEREO were “stealthy,” showing none of the usual signals. As a result, any system designed to watch for such warning signs could miss one-third of all solar blasts.

“Meteorologists can give days of warning for a hurricane, but only minutes for a tornado,” explains Smithsonian astronomer Leon Golub. “Currently, space weather forecasting is more like tornado warnings. We might know an eruption is imminent, but we can’t say exactly when it will happen. And sometimes, they catch us by surprise.”

The paper discussing their findings appeared in the Oct. 10, 2010 issue of The Astrophysical Journal. It was authored by Suli Ma, G. Attrill, and Leon Golub (CfA); and J. Lin (Chinese Academy of Sciences).–Christine Pulliam