When it comes to scary things in the universe, it’s hard to get much scarier than supermassive black holes. These gigantic, invisible menaces lurk in the centers of galaxies, hungrily vacuuming up everything within reach – or so we think. But the truth is more benign. Supermassive black holes snack infrequently, making the recent discovery of a black hole in the act of feeding all the more exciting to astronomers.

“Black holes, like sharks, suffer from a popular misconception that they are perpetual killing machines,” said Ryan Chornock of the Harvard-Smithsonian Center for Astrophysics. “Actually, they’re quiet for most of their lives. Occasionally a star wanders too close, and that’s when a feeding frenzy begins.” 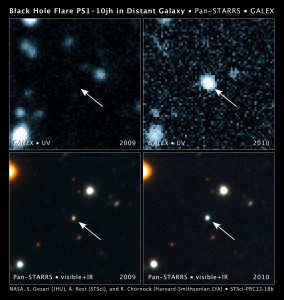 Image right: These images, taken with NASA’s Galaxy Evolution Explorer and the Pan-STARRS1 telescope in Hawaii, show a galaxy that brightened suddenly, caused by a flare from its nucleus. The top left image, taken in 2009, shows the galaxy before the flare, when it wasn’t visible in ultraviolet light. In the top right image, taken on June 23, 2010, the galaxy had become 350 times brighter in ultraviolet light. The bottom left image, shows the galaxy (the bright dot in the center) in 2009 before the flare’s appearance. The bottom right image, taken from June to August 2010, shows the flare from the galaxy nucleus.  (Credit: NASA, S. Gezari (JHU), A. Rest (STScI), and R. Chornock (Harvard-Smithsonian CfA)

Chornock and his colleagues, led by Suvi Gezari of Johns Hopkins University, reported their discovery of a feeding supermassive black hole in the May 3 issue of the journal Nature.

If a star passes too close to a black hole, tidal forces can rip it apart.

Its constituent gases then swirl in toward the black hole. Friction heats the gases and causes them to glow. By searching for newly glowing supermassive black holes, astronomers can spot them in the midst of a feast.

The team discovered just such a glow on May 31, 2010 using the Pan-STARRS1 telescope on Mount Haleakala in Hawaii. The flare brightened to a peak on July 12th before fading away over the course of a year. 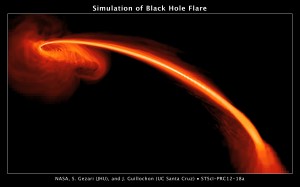 Image left: This computer-simulated image shows gas from a tidally shredded star falling into a black hole. Some of the gas also is being ejected at high speeds into space. Credit: NASA, S. Gezari (JHU), and J. Guillochon (UC Santa Cruz)

“We observed the demise of a star and its digestion by the black hole in real time,” said Harvard co-author Edo Berger.

The glow came from a previously dormant supermassive black hole at the center of a galaxy 2.7 billion light-years away. The black hole contains as much mass as 3 million suns, making it about the same size as the Milky Way’s central black hole.

Follow-up observations with the MMT Observatory in Arizona showed that the black hole was consuming large amounts of helium. Therefore, the shredded star likely was the core of a red giant star. The lack of hydrogen showed that the star lost its outer atmosphere on a previous pass by the black hole.

“This star barely survived one encounter with the black hole, only to meet its unfortunate end in round two,” said Chornock.

The discovery demonstrates the sleuthing power of the Panoramic Survey Telescope and Rapid Response System (Pan-STARRS), which was designed to locate all kinds of transient phenomena in the night sky.