A galaxy’s core is a busy place, crowded with stars swarming around an enormous black hole. When galaxies collide, it gets even messier as the two black holes spiral toward each other, merging to make an even bigger gravitational monster.

Once it is created, the monster goes on a rampage. The merger kicks the black hole into surrounding stars. There it finds a hearty meal, shredding and swallowing stars at a rapid clip. According to new research by Nick Stone and Avi Loeb (Harvard-Smithsonian Center for Astrophysics), upcoming sky surveys might offer astronomers a way to catch a gorging black hole “in the act.” 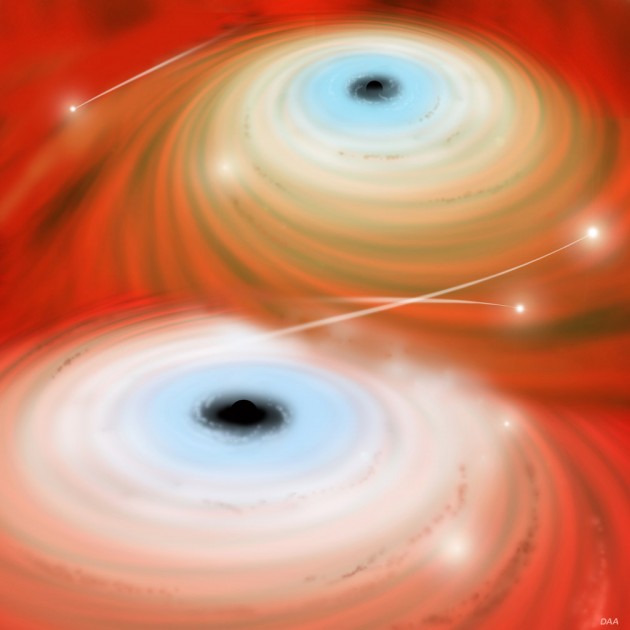 “That kick is very important. It can shove the black hole toward stars that otherwise would have been at a safe distance,” said Stone. “Essentially, the black hole can go from starving to enjoying an all-you-can-eat buffet,” he added.

When tidal forces rip a star apart, its remains will spiral around the black hole, smashing and rubbing together, heating up enough to shine in the ultraviolet or X-rays. The black hole will glow as brightly as an exploding star, or supernova, before gradually fading in a distinctive way.

Importantly, a wandering, supermassive black hole is expected to swallow many more stars than a black hole in an undisrupted galactic center. A stationary black hole disrupts one star every 100,000 years. In the best-case scenario, a wandering black hole could disrupt a star every decade. This would give astronomers a much better opportunity of spotting these events, particularly with new survey facilities like Pan-STARRS and the Large Synoptic Survey Telescope.

Catching the signal from a disrupted star is a good start. However, astronomers really want to combine that information with gravitational wave data from the black hole merger. The Laser Interferometer Space Antenna (LISA), a future mission designed to detect and study gravitational waves, could provide that data.

Gravitational wave measurements yield very accurate distances (to better than one part in a hundred, or 1 percent). However, they don’t provide precise sky coordinates. A star’s tidal disruption will let astronomers pinpoint the galaxy containing the recently merged black-hole binary.

By correlating the galaxy’s redshift (a change in its light that’s caused by the expanding universe) with an accurate distance, astronomers can infer the equation of state of dark energy. In other words, they can learn more about the force that’s accelerating cosmic expansion, and which dominates the cosmic mass/energy budget today.

“Instead of ‘standard candles’ like supernovae, the black hole binary would be a ‘standard siren.’ Using it, we could create the most accurate cosmic ‘ruler’ possible,” stated Loeb.

Finding a merged black hole also would allow theorists to explore a new regime of Einstein’s general theory of relativity.

“We could test general relativity in the regime of strong gravity with unprecedented precision,” said Loeb.

Their work was published in the March 2011 issue of Monthly Notices of the Royal Astronomical Society.