Pooling funds and putting their heads together, more than 70 scientists from 9 institutions including the Smithsonian Tropical Research Institute, sequenced the entire genome of the butterfly genus Heliconius, a brightly colored favorite of collectors and scientists since the Victorian era. Their results are published in the prestigious journal, Nature. 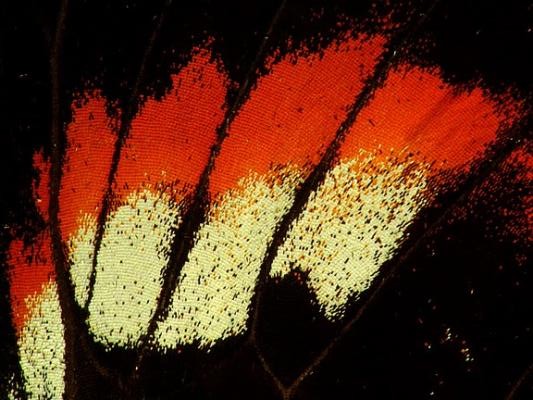 Based on the new sequence, scientists found that different species copy each other’s wing patterns by exchanging genes, a process thought to be very rare, especially in animals. (Photo by Mathieu Joron)

Based on the new sequence, scientists found that different species copy each other’s wing patterns by exchanging genes, a process thought to be very rare, especially in animals. Although many different species interbreed in the wild, their hybrid offspring often cannot reproduce successfully. But sometimes hybrids gain useful genes that help them adapt to changing conditions. Heliconius hybrids gain wing patterns that help them survive.

Kanchon Dasmahapatra, the a lead author of the study and a former Smithsonian fellow who worked with Jim Mallet at University College London notes: “What we discovered is that one butterfly species can gain its protective colour pattern genes ready-made from a different species by hybridizing with it–a much faster process than having to evolve one’s colour patterns from scratch.”

Some of the other genes in the sequence also surprised researchers. These butterflies, typically regarded as primarily visual insects, apparently have a rich array of genes for smelling and sensing chemicals in their environment, raising new questions about the links between perception and the origins of new species. Indeed, analysis carried out at the University of California by co-author Adriana Briscoe showed that butterflies have an even greater array of genes involved in chemical communication than moths, which depend on chemical signals for finding mates and host plants.

The study heralds a new era in genome biology and an important step in the Smithsonian’s goal to understand and sustain a biodiverse planet. Low-cost genetic sequencing opens doors to small research groups and individuals to sequence entire genomes, a technique formerly accessible only to labs with major government funding.

“Assembling a genome from scratch is still hard work: think Humpy-Dumpty,” said Owen McMillan, geneticist and Academic Dean at the Smithsonian Tropical Research Institute, “but it is getting easy, inexpensive, and is transforming how we do science. At the core, having a reference genome opens up new research possibilities and reveals previously unimagined connections.