The origins of a torus in a galactic nucleus

Quasars are among the most energetic objects in the universe, with some of them as luminous as ten thousand Milky Way galaxies. Quasars are thought to have massive black holes at their cores, and astronomers also think that the regions around the black holes actively accrete matter, a process that releases vast amounts of energy and often ejects a powerful, narrow jet of material. Because they are so bright, quasars can be seen even when they are very far away, and this combination of being both highly energetic and located at cosmological distances makes them appealing to astronomers trying to figure out the nature of galactic center black holes (our own Milky Way has one) and the conditions in the early universe that prompt these monsters to form. 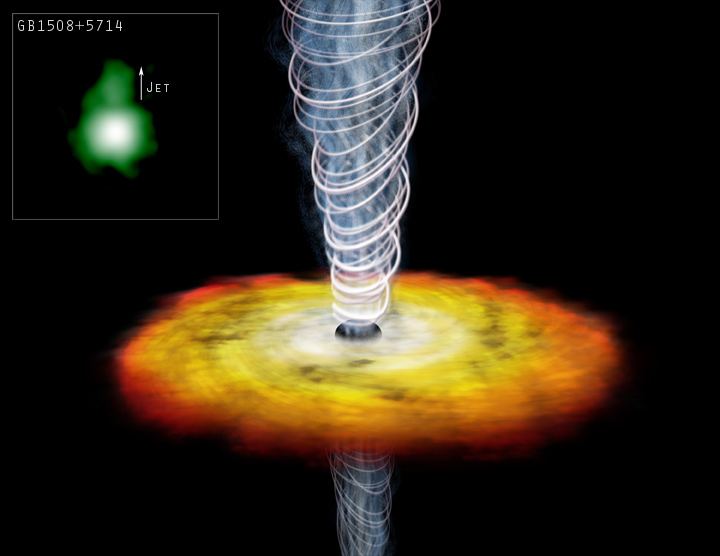 An artist’s conception of a quasar, with a Chandra X-ray Observatory image of the quasar GB1508+5714 inset. The data reveal a jet of high-energy particles that extends more than 100,000 light years from the supermassive black hole powering the quasar. A new study shows for the first time that a torus of gas and dust will naturally form around the nuclear black hole as material falls in toward the nucleus. (Image by NASA/Chandra)

Quasars, and other galaxies with less dramatic but still active nuclei, come in a variety of subgroups. Some, for example, contain hot gas moving at huge velocities, while others do not; some are seen with strong dust absorption features, but others are not. One problem in unraveling the mystery of quasars is that many (perhaps most) quasar nuclei seem to be surrounded by a torus of obscuring dust that makes them difficult to study. In fact, the standard model of these objects proposes that the various subgroups result from viewing the active nuclei at different angles with respect to its dusty torus. If the nucleus happens to be seen face-on, and if there is a jet present, the gas velocities are large and the dust is not apparent; if seen edge-on through the torus, the observed velocities are much smaller and the dust absorption features are dominant. But so far no one knows for sure how quasars form, how they develop in time, or how (or what) physical processes generate their stupendous energies.

The situation may be about to change. The violent activity around a black hole is very difficult to analyze with just pen and paper, and so for years researchers have tried to use computer simulations to identify what happens. But these simulations have faced a major challenge: tracing the detailed flow of material from galaxy-wide scales of hundreds of thousands of light-years down into the central tenth of a light-year around the black hole. It has just been too hard to keep track of everything at such a fine scale across such a large one.

Harvard-Smithsonian Center for Astrophysics astronomers Chris Hayward and Lars Hernquist, together with ex-CfA member Phil Hopkins and a fourth colleague, have figured out a way to deal with the computational dilemma. They use a clever scheme of multi-scale “zoom-ins” which allows them to track and model, in a physically consistent way, selected parcels of gas as they move inward towards the torus. Their simulations lead them to reach two very significant conclusions. First, they show that a dusty torus is likely to be produced around the black hole – in the past it had been postulated in order to explain the various morphologies but had never been demonstrated, even in a simulation. Secondly, the scientists show that the torus is not just a passive screen: it plays an active role in feeding gas and dust into the accretion disk around the black hole itself.