Researchers at the Smithsonian Tropical Research Institute and University of Costa Rica studying why spiders do not stick to their own sticky webs have discovered that a spider’s legs are protected by a covering of branching hairs and by a non-stick chemical coating. Their results are published online in the journal, Naturwissenschaften. 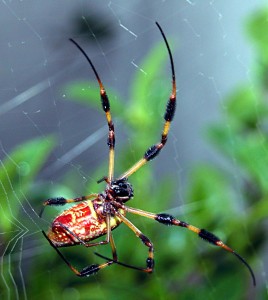 Image right: This mature female golden silk spider had just contacted the sticky line with her right leg IV and was about to extend this leg, thereby pulling additional line from her spinnerets. (Photo by C. Frank Starmer)

They also observed that spiders carefully move their legs in ways that minimize adhesive forces as they push against their sticky silk lines hundreds to thousands of times during the construction of each orb.

The web-weaving behavior of two tropical species, Nephila clavipes and Gasteracantha cancriformis, was recorded with a video camera equipped with close-up lenses. Another video camera coupled with a dissecting microscope helped to determine that individual droplets of sticky glue slide along the leg’s bristly hair, and to estimate the forces of adhesion to the web. By washing spider legs with hexane and water, they showed that spiders’ legs adhered more tenaciously when the non-stick coating was removed.