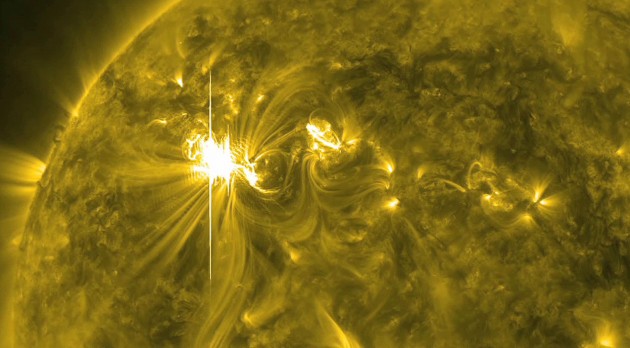 This NASA movie of the March 6, 2012 X5.4 solar flare was captured by the Atmospheric Imaging Assembly instrument aboard NASA’s Solar Dynamics Observatory in X-rays (at a wavelength of 171 Angstroms). The Sun’s Active Region 1429 has been shooting off flares and coronal mass ejections since it rotated into Earth’s view on March 2, 2012. Two X-class flares have been released, an X1.3 and an X5.4.

So far, effects on Earth have been minimal. However, viewers at high northern latitudes may be treated to beautiful displays of the Northern Lights overnight.

The Atmospheric Imaging Assembly (AIA) was developed with the help of scientists and engineers from the Harvard-Smithsonian Center for Astrophysics working as a part of the Lockheed Martin Solar and Astrophysics Laboratory team. It is giving unprecedented views of the Sun’s atmosphere or corona 24 hours a day, 7 days a week. AIA takes a picture of the Sun’s corona every second with a quality higher than HD television!

The AIA telescope, built in Cambridge, Mass., is a follow on to the very successful TRACE satellite, built at SAO in partnership with Lockheed Martin Solar and Astrophysics Laboratory. It allows scientists to study solar flares and associated coronal mass ejections to better understand their initiation and propagation towards the Earth. As solar activity heats up over the next year, this telescope will be watching the Sun reveal its explosive nature. Stay tuned!