New Book: “Sweet Stuff: An American History of Sweeteners from Sugar to Sucralose”

Each year, the average American consumes around 150 pounds of sugars and substantial amounts of artificial sweeteners. In the new book Sweet Stuff: An American History of Sweeteners from Sugar to Sucralose, Deborah Jean Warner, curator at the Smithsonian’s National Museum of American History, presents the story of America’s love affair with sugar and how sweeteners have affected key aspects of the American experience. Warner’s narrative covers the major natural sweeteners, including sugar, molasses from cane, beet sugar, corn syrup, honey and maple, as well as artificial sweeteners such as saccharin, cyclamate, aspartame and sucralose. This painstakingly researched and engaging narrative is the first book to detail the history of the subject, investigating it in the context of diet, science and technology, business and labor, politics and popular culture. 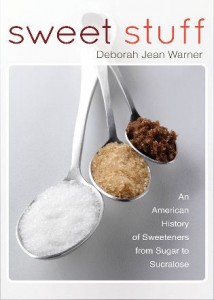 Warner weaves together the variety of routes that Americans have taken to a collective sweet tooth and looks at the ways that federal and state governments promoted some sweeteners and limited the distribution of others. The book examines the times when newer and less costly sweeteners threatened the market dominance of older and more expensive options. It also explores complex issues through the sweeteners industry, such as food purity, food safety and truth in advertising. Warner reveals many aspects of the American business spirit that have accompanied and contributed to the sweetener industry and demonstrates how sweeteners of all varieties have become part of the fabric of our communities. “Sweet Stuff” takes a revealing look at sweeteners that will appeal to those interested in food culture as well as American culture and history.

(Sweet Stuff: An American History of Sweeteners from Sugar to Sucralose by Deborah Jean Warner, is published by Smithsonian Institution Scholarly Press, in cooperation with Rowman & Littlefield Publishers, Inc./September 2011)