Arrows indicate nectaries located at the base of leaf stalks on three different species of Carapa trees. From left “C. microcarpa  A. Chev” from Ghana, “C. parviflora” from Cameroon and “C. macrantha” Harms in Gabon. (Photos courtesy David Kenfack)

Scientific inspiration springs from many sources. In the case of Smithsonian botanist David Kenfack, ant bites were the inspiration for a recent paper he co-authored in the scientific journal Adansonia focusing on a genus of trees of the mahogany family.

“I was doing a study of this genus of plants (Carapa) when I realized that every time I went out collecting, I was always fighting ants. They were biting and biting me, and I just wondered why there are always so many ants on these plants,” says Kenfack, of the Smithsonian Center for Tropical Forest Science–Forest Global Earth Observatory.

Kenfack took a closer look at the trees and discovered many were covered with small, nectar-producing organs, called nectaries, on parts of the plant other than the flowers. Some trees had dozens of nectaries on their leaves, fruit, flower petals, leaf stems and other plant parts. 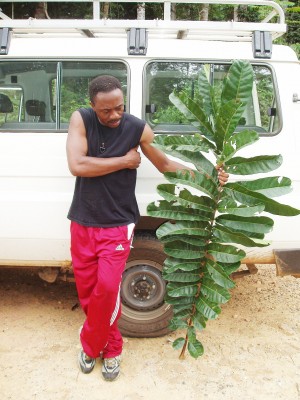 While holding a compound leaf of “Carapa macrantha” Harms, the biggest leaf in the genus Carapa, David Kenfack is bitten by an ant. This photograph was taken near Makokou in Gabon, Africa. (Photo by Yves Issembe)

Some nectaries were small, visible only under a microscope, and others were large and easily visible to the naked eye. Ants were seen drinking from the nectaries which, it was clear, were producing sweet liquid specifically to attract the ants and other forest bugs.

“The theory is that ants protect the plant against herbivores, for example, butterflies lay their eggs on the plant and hatch caterpillars that feed on the leaves. Ants kill and eat caterpillars, so the tree benefits from their presence,” Kenfack says.

Nectaries have been well documented in more than 4,000 species of vascular plants, including the Carapa. But no one had ever done a scientific inventory on all of the nectaries on trees in the Carapa genus, which consist of small-to-large trees in tropical Africa and Central and South America.

In their paper, Kenfack and his co-authors inventoried, for the first time, all the nectaries found on all 27 species of Carapa trees, their size, type and location on the plant. They found that the number and location of nectaries across the genus vary widely in number and physical location from species to species.

They observed that nectaries on petioles (the stalk attaching the leaf blade to a stem), for example, are primarily active in the early stages of leaf development. When a leaf matures the sweet secretion stops and the nectary becomes an inconspicuous black spot. In some species however petiole nectaries remain active on fully mature leaves.

Arrows indicate nectaries located on the mature (G&H) and immature (I) fruits of three different species of Carapa trees. Left and center: “C. procera” C.DC from Ghana and Mali, and right, “C. zemagoana” Kenfack from Cameroon.

On average, African species had more nectaries than the Central and South American species of Carapa, a ratio of 4 to 1, and some species found growing at the highest elevations had no nectaries at all.

“This paper simply demonstrates that this genus of plants has many nectaries that were previously undocumented,” Kenfack says. “With this information, scientists can now do new studies; for instance, examine how the nectaries function, how their secretions differ and if the ants play a role in pollination.” 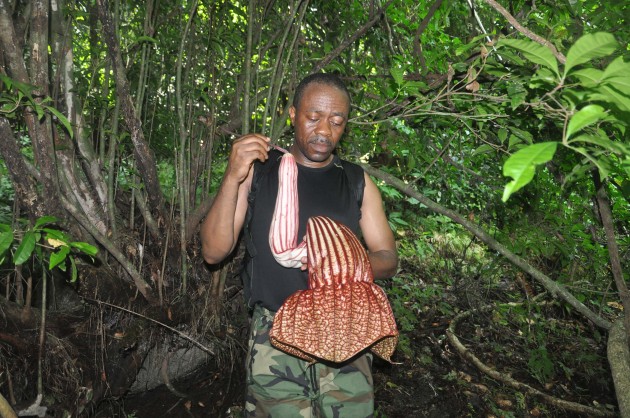 Smithsonian Botanist David Kenfack in Cameroon. The flower he is holding is not from a Capara, but from the liana “Pararistolochia goldieana.” (Photo by Moses Sainge)

Different plants have different strategies for repelling herbivores, Kenfack adds, some produce chemicals that act as repellents or toxins to herbivores, for example. For the Carapa, a strong alliance with ants appears to be a very successful strategy for survival.