A 48 million-year-old fossilized leaf has revealed the oldest known evidence of a macabre part of nature – parasites taking control of their hosts to turn them into zombies. 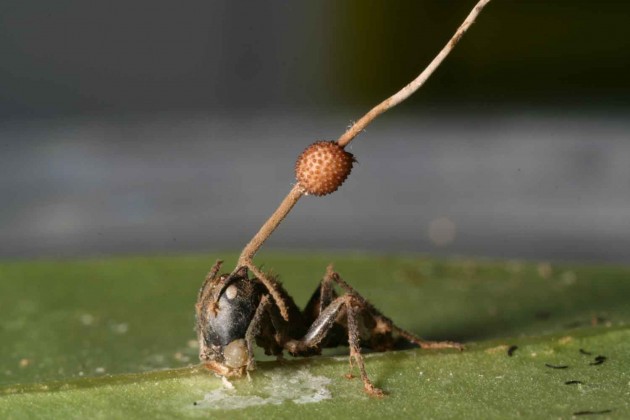 An ant killed by a fungal parasite is shown here biting into a leaf vein. The fungal growth can be clearly seen issuing from the ant’s head. (Photo by David P. Hughes)

The discovery has been made by a research team led by David Hughes of the University of Exeter in England, who studies parasites that can take over the minds of their hosts; Conrad Labandeira from the Smithsonian’s National Museum of Natural History; and  Torsten Wappler, from the Steinmann Institute in Germany.

All manner of animals are susceptible to the often deadly body invasion, but scientists have been trying to track down when and where such parasites evolved.

“There are various techniques, called a molecular clock approach, which we can use to estimate where and when they developed and fossils are an important source of information to calibrate such clocks,” Hughes says. 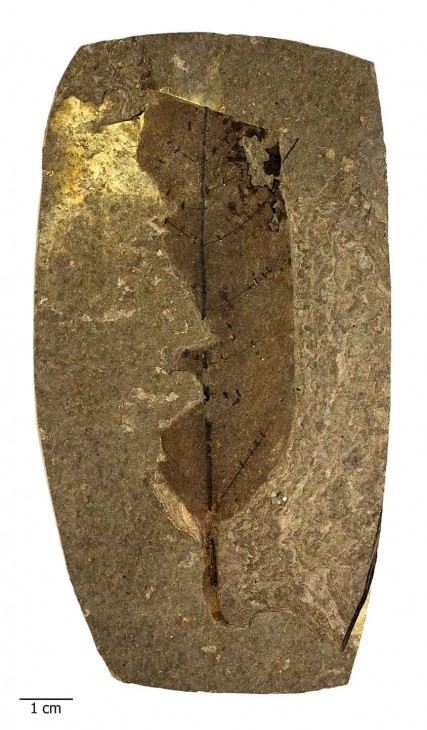 This 48-million-year-old leaf fossil from Messel clearly bears the tell-tale scars of ants that have been infected with the mind-controlling fungal parasite. (Photo by Torsten Wappler)

“This leaf shows clear signs of one well documented form of zombie-parasite, a fungus which infects ants and then manipulates their behavior.”

The fungus, called Ophiocordyceps unilateralis, appears to take over the mind of infected ants – causing them to leave their colonies and head for a leaf which provides the ideal conditions for the parasite to reproduce. 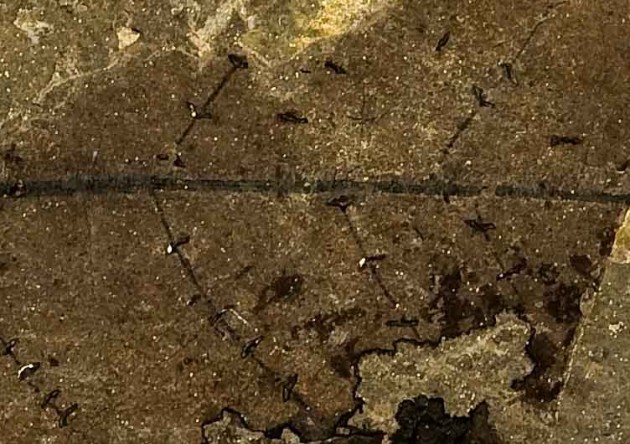 This 48-million-year-old leaf fossil from Messel clearly bears the tell-tale scars of ants that have been infected with the mind-controlling fungal parasite. (Photo by Torsten Wappler)

When the ant gets there it goes into a ‘death grip’– biting down very hard on the major vein of a leaf. This means that when the ant dies, its body stays put so the fungus has time to grow and release its spores to infect other ants.

The death grip bite leaves a very distinct scar on the leaves. This prompted Hughes, Labandeira and Wappler to search for potential evidence of the fungus at work by studying the fossilized remains of leaves.

After studying leaf fossils from the Messel Pit, a site on the eastern side of the Rhine Rift Valley in Hesse, Germany, they found clear evidence of the death grip bite in a 48 million-year-old leaf specimen.

“The evidence we found mirrors very closely the type of leaf scars that we find today, showing that the parasite has been working in the same way for a very long time,” Hughes explains.

“This is, as far as we know, the oldest evidence of parasites manipulating the behaviour of their hosts and it shows this parasitic association with ants is relatively ancient and not a recent development.

“Hopefully we can now find more fossilised evidence of parasitic manipulation. This will help us shed further light on the origins of this association so we can get a better idea of how it has evolved and spread.”