Skinny lines of ants snake through the rainforest carrying leaves and flowers above their heads—fertilizer for industrial-scale, underground fungus farms. Soon after the dinosaur extinctions 60 million years ago, the ancestors of leaf-cutter ants swapped a hunter-gatherer lifestyle for this bucolic existence on small-scale subsistence farms. A new study at the Smithsonian Tropical Research Institute (STRI) in Panama revealed that living relatives of the earliest fungus-farming ants still have not domesticated their crop, a challenge also faced by early human farmers. 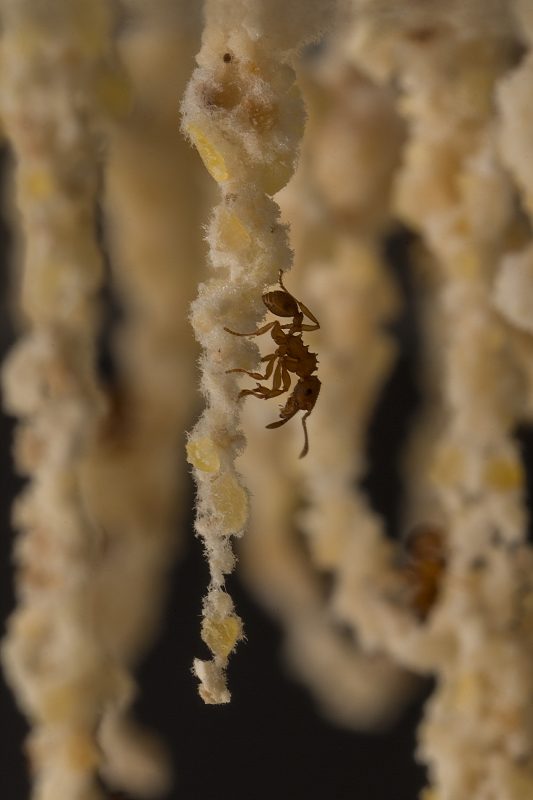 “For this sort of tight mutual relationship to develop, the interests of the ants and the fungi have to be completely aligned, like when business partners agree on all the terms in a contract,” said Bill Wcislo, deputy director at the STRI and co-author of the new publication in the Proceedings of the National Academy of Sciences. “We found that the selfish interests of more primitive ancestors of leaf-cutting ants are still not in line with the selfish interests of their fungal partner, so complete domestication hasn’t really happened yet.”

Just as human farmers harvest their vegetables before they go to seed, ants want their fungus to minimize the amount of energy it puts into creating inedible mushrooms full of spores. It is best for the ants if the fungus grows more of the fungal hyphae that fill up the chambers in their underground gardens and serve as food for the ants and their larvae.

In a study of Mycocepurus smithii, an ancestor of the leaf cutters that has not yet domesticated its fungal crop, at the Smithsonian research center in Gamboa, Panama, Jonathan Shik, a Marie Curie Post-Doctoral Fellow in Jacobus Boomsma’s lab at the University of Copenhagen, and collaborators discovered that the ants adjust the protein and carbohydrate concentration of the mulch they provide to minimize the amount of mushrooms that their non-domesticated fungal cultivars produce. When they provide mulches rich in carbohydrates, the fungus can produce both hyphae and mushrooms, but carefully provisioned doses of protein can prevent the fungi from making mushrooms. However, this strategy of keeping their fungus in line requires that the total output of their fungus gardens remain low. 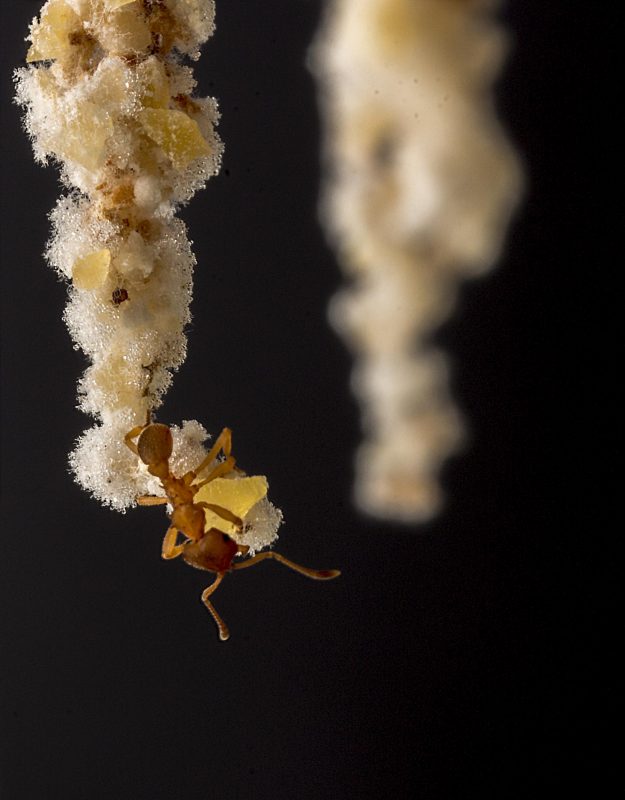 “It took 30 million years of natural selection until the higher attine ants fully domesticated one of their fungal symbiont lineages. We think that finally resolved this farmer-crop conflict and removed constraints on increased productivity, producing the modern leaf-cutter ants 15 million years ago,” Boomsma said. “In contrast, it took human farmers relatively little time to domesticate fruit crops and to select for seedless grapes, bananas and oranges.”