New observations by NASA’s Wide-field Infrared Survey Explorer, or WISE, show there are significantly fewer near-Earth asteroids in the mid-size range than previously thought. The findings also indicate NASA has found more than 90 percent of the largest near-Earth asteroids.

Astronomers now estimate there are roughly 19,500 — not 35,000 — mid-size near-Earth asteroids. Scientists say this improved understanding of the population may indicate that the hazard to Earth could be less than previously thought. However, the majority of these mid-size asteroids remain to be discovered. More research also is needed to determine if fewer mid-size objects (between 330 and 3,300 feet wide) also mean fewer potentially hazardous asteroids (those that come closest to Earth). 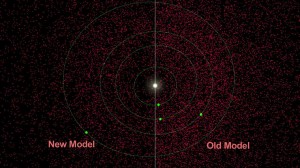 Image right: NEOWISE observations indicate that there are at least 40 percent fewer near-Earth asteroids in total that are larger than 330 feet, or 100 meters. Our solar system’s four inner planets are shown in green, and our sun is in the center. Each red dot represents one asteroid. Click to enlarge. (Image courtesy NASA/JPL-Caltech)

The results come from the most accurate census to date of near-Earth asteroids, the space rocks that orbit within 120 million miles (195 million kilometers) of the sun into Earth’s orbital vicinity. WISE observed infrared light from those in the middle to large-size category. The survey project, called NEOWISE, is the asteroid-hunting portion of the WISE mission. Study results appeard in September in the The Astrophysical Journal.

“The risk of a really large asteroid impacting the Earth before we could find and warn of it has been substantially reduced,” said Tim Spahr, the director of the Minor Planet Center at the Harvard-Smithsonian Center for Astrophysics in Cambridge, Mass., and a co-author on the study. 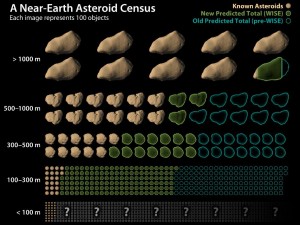 Image left: This chart shows how data from NASA’s Wide-field Infrared Survey Explorer, or WISE, has led to revisions in the estimated population of near-Earth asteroids. The infrared-sensing telescope performed the most accurate survey to date of a slice of this population. This allowed the science team to make new estimates of the total numbers of the objects in different size categories. NEOWISE observed more than 500 objects larger than 100-meters (330-feet) wide. (Image courtesy NASA/JPL-Caltech)

WISE scanned the entire celestial sky twice in infrared light between January 2010 and February 2011, continuously snapping pictures of everything from distant galaxies to near-Earth asteroids and comets. NEOWISE observed more than 100,000 asteroids in the main belt between Mars and Jupiter, in addition to at least 585 near Earth.

“NEOWISE allowed us to take a look at a more representative slice of the near-Earth asteroid numbers and make better estimates about the whole population,” said Amy Mainzer, lead author of the new study and principal investigator for the NEOWISE project at NASA’s Jet Propulsion Laboratory (JPL) in Pasadena, Calif. “It’s like a population census, where you poll a small group of people to draw conclusions about the entire country.”