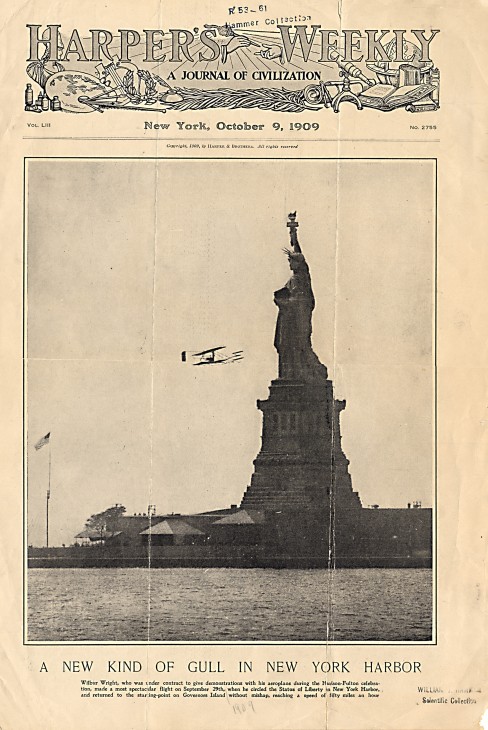 The Statue of Liberty, “Liberty Enlightening the World,” was a gift to the U.S. from the people of France. It was dedicated Oct. 28, 1886. The statue, designed by sculptor Frederic Auguste Bartholdi, represents Libertas, the Roman goddess of freedom, who bears a torch and a tabula ansata (a tablet evoking the law) with the date of the American Declaration of Independence, July 4, 1776. The statue has become a universal symbol of freedom and democracy.

This image shows the front page of the Oct. 9, 1909, issue of Harper’s Weekly. It captures Wilbur Wright as he flies around the Statue of Liberty in an early Wright Type A Flyer Sept. 29, 1909, during the Hudson-Fulton Celebration. The issue is titled, “A New Kind of Gull in New York Harbor.”

The Hudson-Fulton Celebration, celebrated in New York and New Jersey Sept. 25 – Oct. 9, 1909, was an elaborate commemoration of the 300th anniversary of Henry Hudson’s discovery of the Hudson River and the 100th anniversary of Robert Fulton’s first successful commercial application of the paddle steamer. The celebration also highlighted the different modes of transportation in use during the early 1900s—including public flights by Wilbur Wright.

The original caption from Harper’s Weekly reads as follows:

“Wilbur Wright, who was under contract to give demonstrations with his aeroplane during the Hudson-Fulton celebration, made a most spectacular flight on September 29th, when he circled the Statue of Liberty in New York Harbor, and returned to the starting point on Governors Island without mishap, reaching a speed of fifty miles an hour.”

This item is one of 137 million artifacts, works of art and specimens in the Smithsonian’s collection. It is on display at the National Museum of Air and Space.