“Falling to Earth: An Apollo 15 Astronaut’s Journey to the Moon” by Al Worden with Francis French

As command module pilot for the Apollo 15 mission to the moon in 1971, Al Worden flew on what is widely regarded as the greatest exploration mission that humans have ever attempted. He spent six days orbiting the moon, including three days completely alone, the most isolated human in existence. During the return from the moon to earth Worden also conducted the first spacewalk in deep space, becoming the first human ever to see both the entire earth and moon simply by turning his head. The Apollo 15 flight capped an already-impressive career as an astronaut, including important work on the pioneering Apollo 9 and Apollo 12 missions, as well as the perilous flight of Apollo 13. 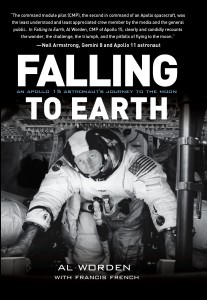 Nine months after his return from the moon, Worden received a phone call telling him he was fired and ordering him out of his office by the end of the week. He refused to leave.

What happened in those nine months, from being honored with parades and meetings with world leaders to being unceremoniously fired, has been a source of much speculation for four decades. In Falling to Earth, Worden tells for the first time the full story around the dramatic events that shook NASA and ended his spaceflight career. Readers will learn them here for the first time, along with the exhilarating account of what it is like to journey to the moon and back. It’s an unprecedentedly candid account of what it was like to be an Apollo astronaut, with all its glory but also its pitfalls.

Falling to Earth is published by Smithsonian Books.