New excavations in Indonesia and dating analyses by scientists show that modern humans never co-existed with Homo erectus. This finding counters previous hypotheses of human evolution. The research, reported in the journal PLoS One, offers new insights into the nature of human evolution, suggesting a different role for Homo erectus than had been previously thought.

The work was conducted by the Solo River Terrace Project, an international group of scientists directed by anthropologists Etty Indriati of Gadjah Mada University in Indonesia and Susan Antón of New York University. Briana Pobiner, paleoanthropologist at the Smithsonian’s National Museum of Natural History in Washington, D.C. is the project’s archaeologist. 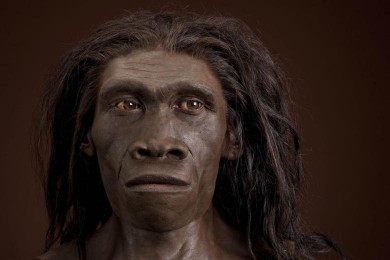 Homo erectus is widely considered a direct ancestor of modern humans—it resembles modern humans in many respects, except for its smaller brain and skull shape—and was the first hominin, or early human, to migrate out of Africa, approximately 1.8 million years ago. Homo erectus went extinct in Africa and much of Asia about 500,000 years ago, but appeared to survive in Indonesia until about 35,000 to 50,000 years ago at the site of Ngandong on the Solo River. These late members of Homo erectus would have shared the environment with early members of our own species, Homo sapiens, who arrived in Indonesia by about 40,000 years ago.

The Solo River Terrace Project’s investigations occurred in Ngandong and Jigar, two sites in the “20-meter terrace” of the Solo River. The sediments in the terrace were formed by the flooding of the ancient river, but currently sit above the Solo River because the river has cut downward through time. The terrace has been a rich source for the discovery of Homo erectus and other animal fossils since the 1930s.

As recently as 1996, a research team dated these sites of hominin, or early human, fossils to as young as 35,000-50,000 years old. The analyses used a technique that dates teeth, and thus provided ages for several animals discovered at the sites. However, other scholars suggested the sites included a mixture of older hominins and younger animals, raising questions about the true age of the hominin remains.

Since 2004, team members have conducted analyses of animal remains, geological surveys, trenching, and archaeological excavations. The results from all of these provide no evidence for the mixing of older and younger remains.

“The postmortem damage to the animal remains is consistent and suggests very little movement of the remains by water,” Pobiner explained. “This means that it is unlikely that very old remains were mixed into younger ones.” [See Briana at work in this video.]

In addition, clues from the sediments exposed during excavation suggest to the projects’ geoarchaeologists, Rhonda Quinn, Chris Lepre, and Craig Feibel, of Seton Hall, Columbia, and Rutgers universities, that the deposits occurred over a short time period. The teeth found in different excavation layers at Jigar are also all nearly identical in age, supporting the conclusion that mixing across geological periods did not occur.