Among the many treasures on view in the new David H. Koch Hall of Human Origins at the Smithsonian’s National Museum of Natural History is the only original fossil Neanderthal skeleton in the United States. The skeleton is from the  Smithsonian’s human fossil collection and is part of the enormous range of archeological material assembled from around the world for this exhibition. Also on view are two original fossil skulls of Cro-Magnon and the La Ferrassie Neanderthal on temporary loan from the Musée de l’Homme in France. 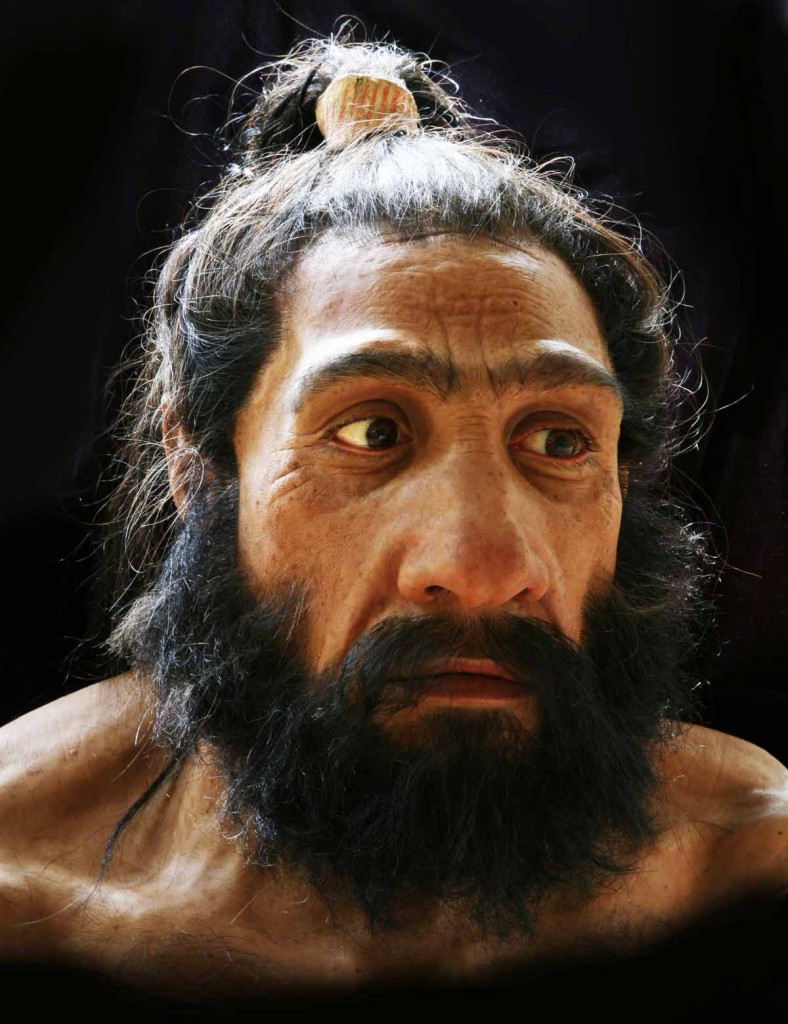 A hyper-realistic bust of Homo neanderthalensis by artist John Gurche in the David H. Koch Hall of Human Origins.

Based on decades of cutting-edge research, the 15,000-square-foot Hall of Human Origins offers visitors an immersive, interactive journey through 6 million years of human evolution that spells out how defining characteristics of the human species have evolved during millions of years in response to a changing world. Inside are stories of survival, extinction and evidence of how environmental change may have shaped the evolution of new adaptations and the origin or extinction of early hominin species, as well as the emergence of our species, Homo sapiens. Visitors connect with their distant ancestors through life-size forensically reconstructed faces of early human species and learn about major milestones in the origins of human beings.

Other key features in the exhibition include interactive snapshots in time based on actual field sites where research is being conducted, a display of more than 75 skulls (exact replicas), an interactive human family tree showcasing 6 million years of evolutionary evidence from around the world, a “One Species Living Worldwide” amphitheater show and a special “Changing the World” gallery, in which visitors can address questions and issues surrounding climate change and the impact of humans on the Earth.

“The theme of the exhibition, ‘What Does It Mean to Be Human?,’ is one of the most profound questions humans have asked over thousands of years and is informed by philosophy, religion and the arts and sciences,” said Rick Potts, director of the Human Origins Program and curator of anthropology at the museum. “Our goal is to provide a solid foundation for the public to explore the scientific contributions to answering this question.” 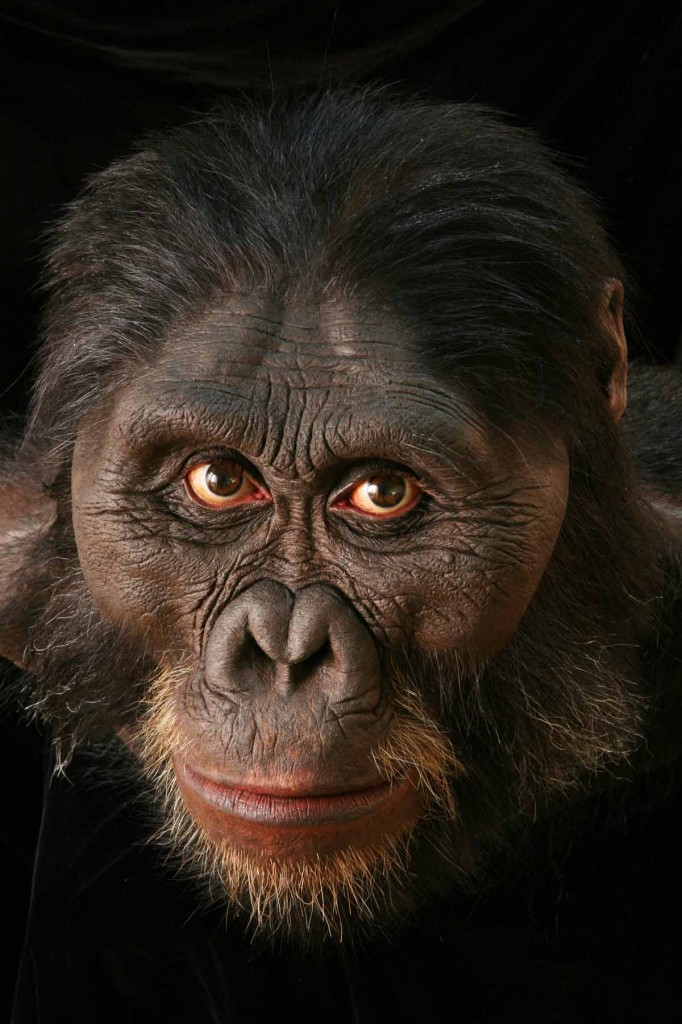 A bust of Australopithecus afarensis by John Gurche.

“What our exhibit does, is something that no other exhibit in the world does,” Potts continues. “ It’s not just about the discovery of a particular fossil human, it’s not just about debates that rage in scientific circles about our family tree and who was related to whom of the early species of fossil humans.” Rather this exhibit is “about the emergence of human characteristics, the things that define every single human being on earth today and it allows people the chance to explore the antiquity of walking upright on two legs, when we started making tools and the changes in technology over time, when our brains became large, the origins of art and our ability to use symbols and language. It allows the visitor to explore that deep antiquity and to see that everything didn’t happen all at once but rather things occurred over a 6-million year period in accumulating the characteristics of what it means to be a human being today.” 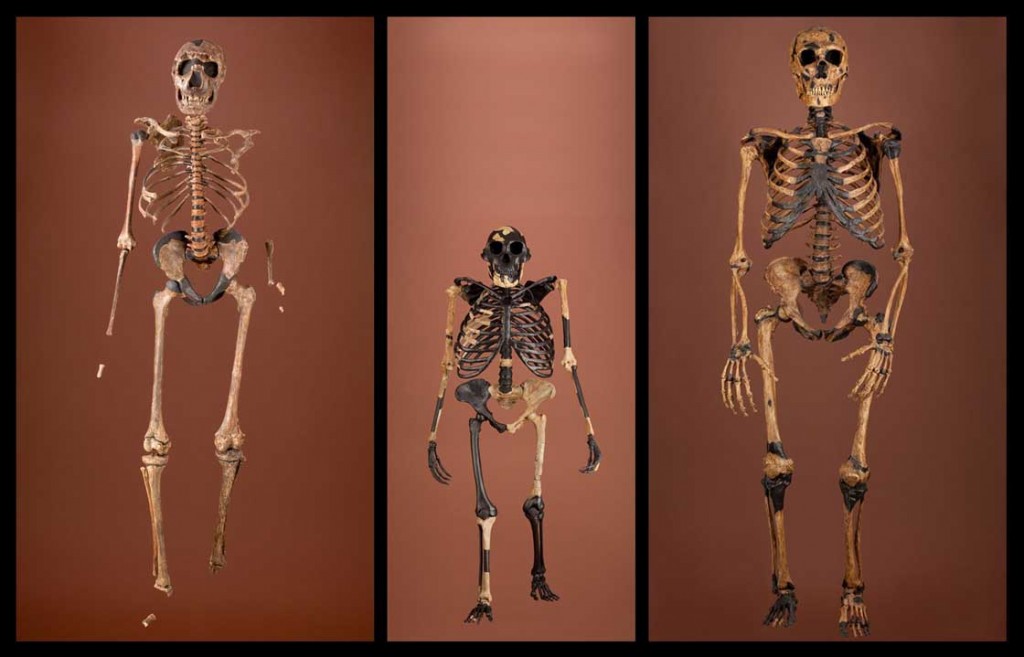 Also, the exhibition contains a series of interactive stations to help visitors explore scientific evidence about the lives of early human ancestors and have fun while doing it. For example, there is a face-morphing station where visitors can see their faces transform into an ancient species of their choosing. Other features include interactive snapshots in time using the actual field sites where research is conducted; an interactive human family tree showcasing 6 million years of evolutionary evidence; a “One Species Living Worldwide” theater show; and a special “Humans Change the World” gallery.

Visitors can dig deeper online through the Human Origins Web site, http://humanorigins.si.edu, which features the Human Origins research program, collections and field sites—including podcasts and diaries from the field. They can engage onsite and online with science and scientists and go behind the scenes into the field, the lab or a unique, interactive museum experience that illuminates the major milestones in the origin of human beings.

By presenting the scientific findings and process of discovering how our species has evolved over time, the exhibition, “Human Origins: What Does It Mean to Be Human?,” takes the most comprehensive perspective on human beings of any Smithsonian exhibition.