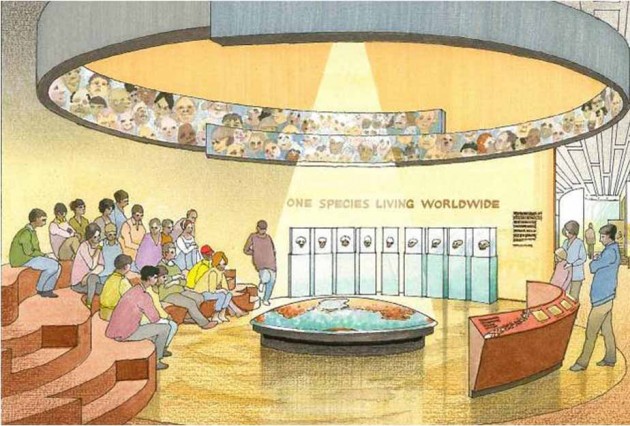 Image: This illustration depitcs a section of the exhibit that highlights how modern humans are the one remaining species of a diverse family tree.

A new exhibition hall dedicated to the discovery and understanding of human origins will open next year at the Smithsonian’s National Museum of Natural History. Based on decades of cutting-edge research by Smithsonian scientists, the David H. Koch Hall of Human Origins will open March 17, 2010.

The $20.7 million hall will be complemented by ongoing human origins research and education programs, which are all key components of the museum’s broader initiative, “Human Origins: What Does It Mean to Be Human?” The initiative focuses on the epic story of human evolution and how the defining characteristics of the species have evolved over 6 million years as its ancestors adapted to a changing world. 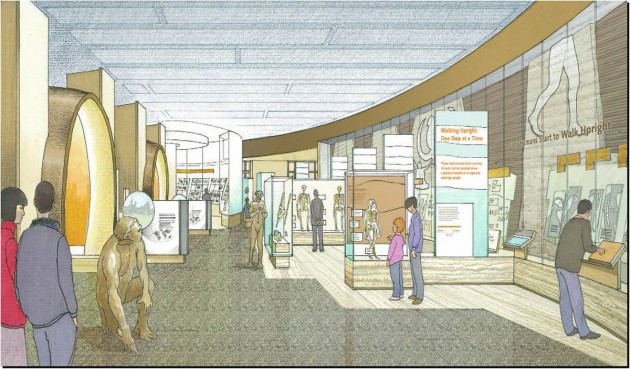 Image: This illustation shows a section of the exhibit that communicates the message that human characteristics evolved over millions of years.

Visitors to the 15,000-square-foot Hall of Human Origins will be immersed in a unique, interactive museum experience illuminating the major milestones in the origin of human beings and the drama of climate change, survival and extinction that have characterized humans’ ancient past. On entering the exhibition from the Sant Ocean Hall, visitors will travel through a dramatic time tunnel depicting life and environments over the past 6 million years. Visitors will also engage with life-size forensically reconstructed faces of early human species, all designed to provide visitors with a sense of personal connection as they look into the eyes and faces of their distant ancestors.

Other key features in the exhibition include interactive snapshots in time using the actual field sites where research is being conducted, a display of more than 75 skulls (cast reproductions) and an interactive human family tree showcasing 6 million years of evolutionary evidence from around the world, a “One Species Living Worldwide” amphitheater show and a special “Changing the World” gallery, in which visitors can address pressing questions and issues surrounding climate change and humans’ impact on the Earth.

“The study of human origins is among the most vibrant fields of science and one that draws much public curiosity,” said Rick Potts, director of the Human Origins Program and curator of anthropology at the museum, whose research and vision is the foundation of the Smithsonian’s Human Origins Initiative. “Our hope is that the exhibition will expand knowledge and understanding about our defining cultural and biological characteristics and how those traits emerged during the past 6 million years—one of the most dramatic eras of environmental change in our Earth’s history.”