A team of researchers and student summer interns from the Smithsonian Environmental Research Center in Edgewater, Md., discovered a northern snakehead (Channa argus) fish in the Rhode River in mid-July. This is the first report of this invasive species in this area, and may indicate a recent range expansion of the snakehead population. 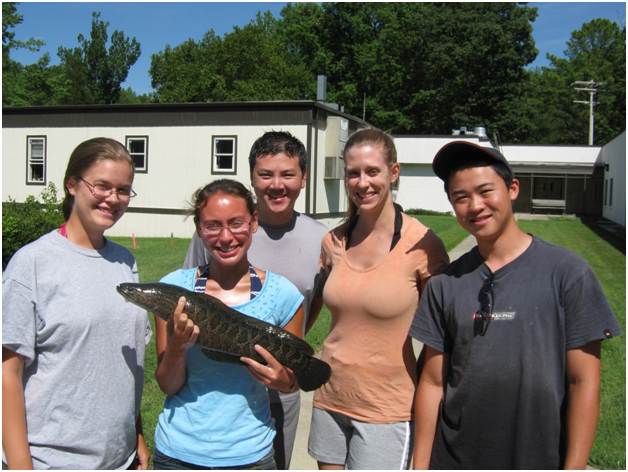 The team of researchers and interns from the Smithsonian Enviornmental Research Center display the northern snakehead fish they recently found in the Rhode River.

Native to China, the first northern snakehead in Maryland was reported in 2002 in a Crofton pond, approximately 20 miles east of Washington, D.C. That population was eradicated, but a separate introduction occurred in the Potomac River in 2004, which led to the establishment of the northern snakehead in creeks and upper waterways of the Potomac in Maryland and Virginia.

The snakehead was caught during routine sampling at a long-term study site using a seine net. It represents the only specimen recorded for the Rhode River site in decades of such surveys. The fish was a mature female, 58 cm (23 inches) in length, caught near the headwaters of the Rhode River.

The northern snakehead is typically found in freshwater, although it can tolerate low salinity waters.  It was thought that higher salinity at the mouth of the Potomac may act as a natural barrier, serving to limit or reduce the fish’s spread to other tributaries. Due to extremely high levels of spring runoff in Upper Chesapeake Bay this year, salinities in Chesapeake tributaries are at some of their lowest levels in the last 30 years. This has potentially allowed the fish to move out of the Potomac and travel to other rivers via Chesapeake Bay.

Unlike most fish, the northern snakehead can survive up to four days out of water if kept moist. This ability comes from air chambers above their gills that act as a primitive lung. They are top-level predators with the ability to consume other fish and animals up to one-third of their own body size.  Northern snakeheads may cause declines in local fish and other organisms, causing potential changes to the food web.

The fish was caught by a research team of scientists and interns from SERC’s Marine Invasions Research Lab, which studies patterns and effects of biological invasions in coastal marine ecosystems throughout North America.  Information on this and other non-native species in Chesapeake Bay can be found at SERC’s website (http://invasions.si.edu/nemesis/chesapeake.html).

Any movement or possession of a live northern snakehead fish is a violation of state law. If you catch a Northern Snakehead, please do not release it. Anglers are asked to kill the fish and contact Maryland or Virginia Departments of Natural Resources.