Twenty years ago scientists at the Marine Invasions Lab of the Smithsonian Environmental Research Center in Edgewater, Md., began studying the interactions between native grass shrimp and their common predators along the shores of the Rhode River in Maryland. Several of these predators–rockfish, white perch and blue crabs–are economically and ecologically important to the Bay and grass shrimp serve as their key food source. 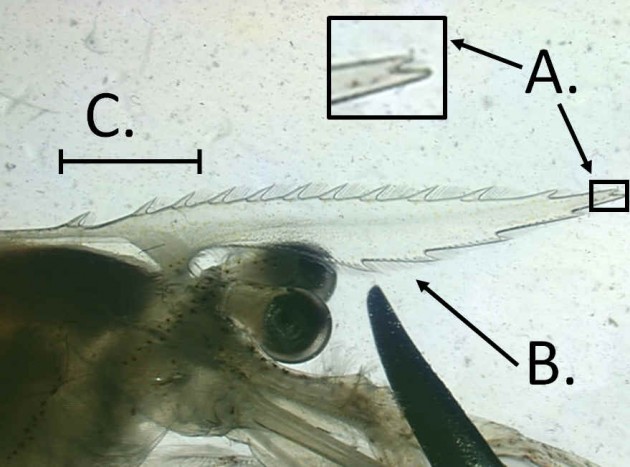 The shrimp speciesPalaemon macrodactylus is characterized by a forked apical point (A.) of the rostrum, the double row of setae (fine hairs) between the ventral teeth of the rostrum (B.), and three dorsal teeth located behind the eye orbital (C.). They are larger than native grass shrimp; frequently have orange bands of color at the joints of their walking legs and a whitish longitudinal stripe down the back of their carapace.

In 2007 during an annual grass-shrimp survey, researcher Eric Bah found a shrimp of the Smithsonian Environmental Research Center dock that had unusual orange bands on its walking legs. After careful examination, it was determined that the shrimp was Palaemon macrodactylus, a species native to the waters of Japan and China that had already established populations in parts of Western Europe, Argentina and the San Francisco Bay.  P. macrodactylus also had been discovered recently in estuaries near New York City and in Connecticut’s Mystic River. 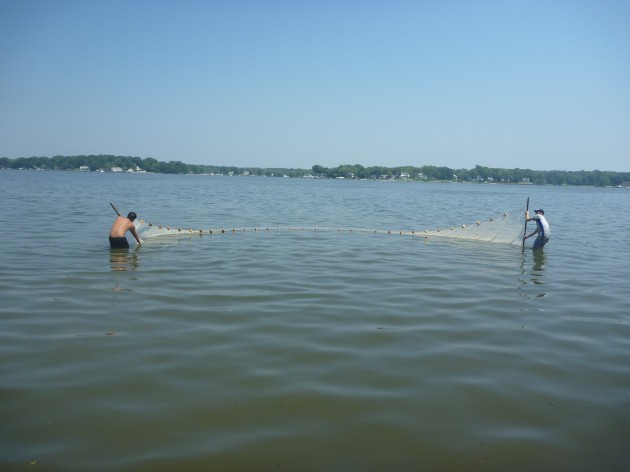 Smithsonian researchers sein for shrimp on the Rhode River.

The shrimp found at the Environmental Research Center was one of three found to date in the Chesapeake Bay; two others were discovered in the James River. Ballast water from large ocean going cargo ships is believed to be the leading means by which these shrimp are being introduced to other waters around world. Establishment of this species in the Chesapeake Bay is considered likely.

The thee invasive oriental shrimp specimens motivated Smithsonian scientists and others to conduct a wider sampling of the Chesapeake Bay. Smithsonian researchers teamed with researchers at Old Dominion University and Virginia Institute for Marine Science to design sampling protocols and develop a survey strategy. In summer 2010 they collected shrimp in the middle and lower Chesapeake Bay at 31 different sites.

All shrimp collected were examined microscopically. N o P. macrodactylus were found. This is good news for Chesapeake Bay, since the ecological impact of this shrimp is not yet known. But the search is not over. Smithsonian staff and their colleagues plan to continue to watch out for this species. In addition, anyone who believes they may have found an invasive shrimp species in the Chesapeake Bay, can contact Stacey Havard at (448) 482-2486 or by e-mail at havards@si.edu, to report their find.