The Carina Nebula, a local supernova factory, is ramping up production

A local supernova factory has recently started production, according to a wealth of new data from NASA’s Chandra X-ray Observatory on the Carina Nebula. This discovery may help astronomers better understand how some of the Galaxy’s heaviest and youngest stars race through their lives and release newly-forged elements into their surroundings. 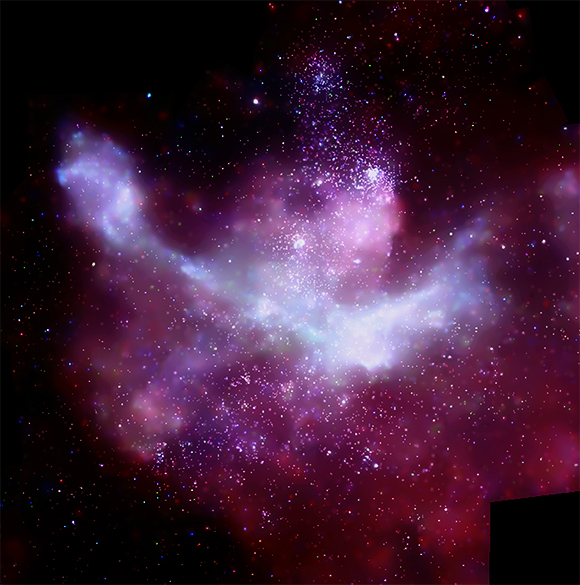 This new Chandra image is, in fact, 22 separate pointings of the telescope stitched together to look at the famous Carina Nebula. In this image, low, medium, and high-energy X-rays are colored red, green, and blue respectively. Chandra detected over 14,000 stars in this region, revealed a diffuse X-ray glow.

Located in the Sagittarius-Carina arm of the Milky Way a mere 7,500 light years from Earth, the Carina Nebula has long been a favorite target for astronomers using telescopes tuned to a wide range of wavelengths. Chandra’s extraordinarily sharp X-ray vision has detected over 14,000 stars in this region, revealed a diffuse X-ray glow, and provided strong evidence that supernovas have already occurred in this massive complex of young stars.

“The Carina Nebula is one of the best places we know to study how young massive stars live and die,” said Leisa Townsley of Penn State University, who led the large Chandra campaign to observe Carina.

One important piece of evidence is an observed deficit of bright X-ray sources in Trumpler 15, one of ten star clusters in the Carina complex.

“This suggests that some of the massive stars in Trumpler 15 have already been destroyed in supernova explosions,” said Junfeng Wang of the Harvard-Smithsonian Center for Astrophysics in Cambridge, Mass, first author of a paper on this cluster. “These stars were likely between 20 and 40 times the mass of the Sun and would have exploded in the last few million years, which is very recent in cosmic terms.”

The new Chandra survey also revealed the presence of six possible neutron stars, the dense cores often left behind after stars explode in supernovas, when previous observations had only detected one neutron star in Carina.

Neutron stars in star-forming regions are very difficult to spot because they are characterized by low-energy X-rays, which are easily absorbed by dust and gas. Therefore, the detected neutron stars probably represent only a small fraction of the complete population, providing strong evidence that the supernova activity is ramping up.

“Supernovas aren’t just eye-catching events, but they release newly- forged elements like carbon, oxygen and iron into their surroundings so they can join in the formation of new objects, like stars and planets,” said Townsley.