In an event that has astronomers mystified; the famous Crab Nebula supernova remnant has erupted in an enormous flare five times more powerful than any flare previously seen from the object. On April 12, NASA’s Fermi Gamma-ray Space Telescope first detected the outburst, which lasted six days.

The nebula is the wreckage of an exploded star that emitted light which reached Earth in the year 1054. It is located 6,500 light-years away in the constellation Taurus. At the heart of an expanding gas cloud lies what is left of the original star’s core, a super dense neutron star that spins 30 times a second. With each rotation, the star swings intense beams of radiation toward Earth, creating the pulsed emission characteristic of spinning neutron stars (also known as pulsars).

VIDEO: There are strange goings-on in the Crab Nebula. On April 12, 2011, NASA’s Fermi Gamma-ray Space Telescope detected the most powerful in a series of gamma-ray flares occurring somewhere within the supernova remnant.

Apart from these pulses, astrophysicists believed the Crab Nebula was a virtually constant source of high-energy radiation. But in January, scientists associated with several orbiting observatories reported long-term brightness changes at X-ray energies. On April 12, Fermi’s Large Area Telescope detected a flare that grew about 30 times more energetic than the nebula’s normal gamma-ray output and about five times more powerful than previous outbursts. On April 16, an even brighter flare erupted, but within a couple of days, the unusual activity completely faded out. 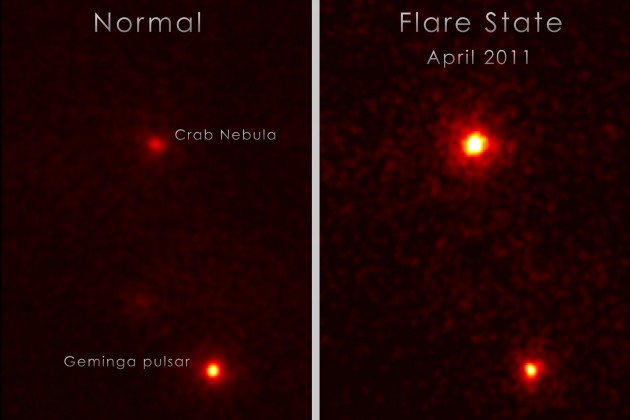 Fermi’s LAT discovered a gamma-ray ‘superflare’ from the Crab Nebula on April 12, 2011. These images show the number of gamma rays with energies greater than 100 million electron volts from a region of the sky centered on the Crab Nebula. At left, the region 20 days before the flare; at right, April 14. (Image courtesyNASA/DOE/Fermi LAT/R. Buehler)

“These super flares are the most intense outbursts we’ve seen to date, and are all extremely puzzling events,” says Alice Harding at NASA’s Goddard Space Flight Center in Greenbelt, Md. Scientists think the flares occur as the intense magnetic field near the pulsar undergoes sudden restructuring. Such changes can accelerate particles like electrons to velocities near the speed of light. As these high-speed electrons interact with the magnetic field, they emit gamma rays.

Since September 2010, NASA’s Chandra X-ray Observatory routinely has monitored the nebula in an effort to identify X-ray emission associated with the outbursts. When Fermi scientists alerted astronomers to the onset of a new flare, Martin Weisskopf and Allyn Tennant at NASA’s Marshall Space Flight Center in Huntsville, Ala., triggered a set of pre-planned observations using Chandra. The Smithsonian Astrophysical Observatory controls Chandra’s science and flight operations from Cambridge, Mass. And the Marshall Space Flight Center manages the Chandra program for NASA. 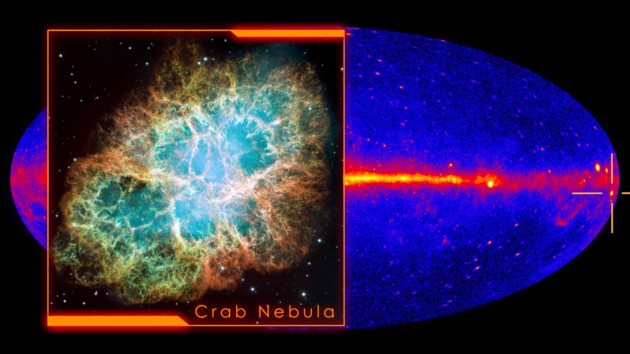 A Hubble visible light image of the Crab Nebula inset against a full-sky gamma ray map showing the location of the nebula (croshairs). (NASA image)

“Despite Chandra’s excellent resolution, we detected no obvious changes in the X-ray structures in the nebula and surrounding the pulsar that could be clearly associated with the flare,” Weisskopf says.

To account for the observed emission, scientists say the electrons must have energies 100 times greater than can be achieved in any particle accelerator on Earth. This makes them the highest-energy electrons known to be associated with any galactic source. Based on the rise and fall of gamma rays during the April outbursts, scientists estimate that the size of the emitting region must be comparable in size to the solar system.—Source: NASA