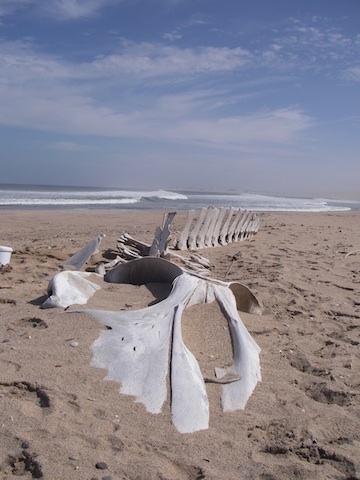 The skeleton of a rorqual whale lies in the sand along the shoreline of northern Namibia. (Photo by Lisa Levin, Scripps Institution of Oceanography)

Whales are the earth’s largest creatures, yet they are incredibly hard to study in the open ocean. For decades scientists have used boats, aircraft and even high cliffs to conduct visual surveys and gather data on whale and dolphin populations. Today, these live surveys form the basis of our knowledge of these marine mammals—what species live where in the world, which ones tend to live together and how abundantly they are represented.

Now, recent work by paleobiologist Nick Pyenson of the Smithsonian’s National Museum of Natural History, has revealed a second, equally valuable resource for information on cetaceans—the record of dead whales and dolphins stranded and washed ashore on beaches around the world.

‘Some 30 years ago scientists got serious about the conservation of cetaceans, and began keeping records of strandings,” Pyenson says. Stranding networks were set up around the world and information—such as species type, sex, age, size, cause of death—have been carefully collected, recorded and archived.

By compiling and comparing long-term data from stranding records and visual sighting records, both taken from nearly every ocean basin in the world, Pyenson verified that stranding records “faithfully reflect the number of species and the relative abundance” found in live surveys. 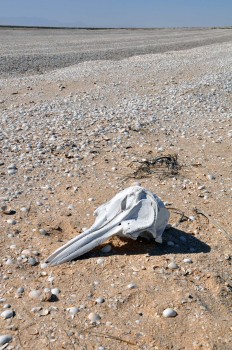 The skull of a bottlenose dolphin rests atop shell accumulations on an island of the Colorado River delta, Baja California, Mexico. (Photo by Nicholas Pyenson)

In fact, Pyenson says, the stranding data in many parts of the world “almost always provides better diversity information about existing cetacean communities than the live surveys. A lot of rare species show up in stranding records that never appear in the live surveys,” Pyenson adds.

The stranding record also faithfully reflects the structure of cetacean communities. “There is a strong and significant correlation in relative abundance of species at nearly all taxonomic levels in both the live data and the stranding data.”

Pyenson’s study, which he refers to as “spreadsheet taphonomy,” is the first time the cetacean stranding record has been verified as a viable reflection of the living community, across the globe. The live sighting and stranding data used in his research came from the coastlines of Australia, the Galapagos Islands (Ecuador), Greece and the Greek Archipelago, Ireland, The Netherlands, New Zealand and the United States. Pyenson based his approach on a study published last year, in the journal Paleobiology, which examined the stranding record of California, Oregon and Washington State.

Pyenson’s current paper, which appeared in a recent edition of the Proceedings of The Royal Society B, imply that other scientists seeking taxonomic data on living cetaceans for a specific region “should consult the archived stranding data rather than conduct a survey,” Pyenson says. “The best results come from bodies of water adjacent to long coastlines where data have been collected for more than 10 years.”

“The results of this live-dead comparison show that key aspects of cetacean community diversity is actually preserved in the stranding record, which is important if you want some baseline for understanding their diversity in the fossil record,” Pyenson adds. Strandings have more in common with natural traps, like the Rancho La Brea tar pits, which provide snapshots of diversity in restricted areas, than they do with live surveys. It is possible, Pyenson says, that fossils from certain geologic strata may even hold clues to the structure and abundance of extinct cetacean communities.