Lunge feeding in rorqual whales (a group that includes blue, humpback and fin whales) is unique among mammals, but details of how it works have remained elusive. Now, scientists from the Smithsonian Institution and University of British Columbia have solved the mystery. They discovered a sensory organ in the chin of rorqual whales that communicates to the brain. The organ orchestrates the dramatic changes and adjustments needed in jaw position and throat-pouch expansion to make lunge feeding successful. The team’s research will be the featured cover story in the May 24 issue of Nature. 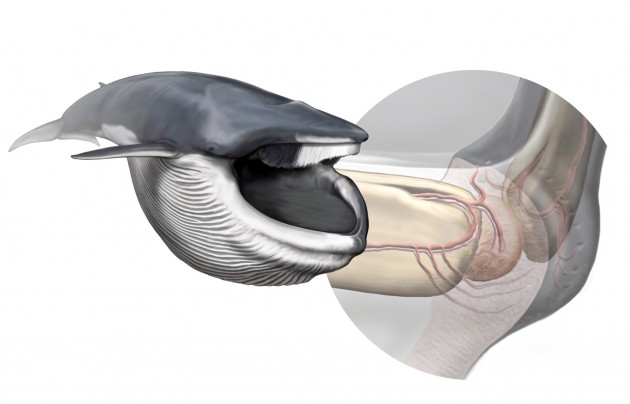 A new sensory organ, found within the chin of rorqual whales, is responsible for coordinating the biomechanics of their extreme lunge-feeding strategy. Left, a fin whale after lunging; right, anatomy of the new sensory organ. (Art by Carl Buell, arranged by Nicholas D. Pyenson / Smithsonian Institution)

Rorqual whales are among the largest vertebrates, yet they feed on some of the smallest organisms in the ocean. They race forward, engulfing more than their own body weight in water and then filter out the millions of krill and small fish inside their mouths―all within seconds. This feeding technique is made possible by several morphological specializations, including hyper-expandable throat pleats, a Y-shaped cartilage structure connecting the chin to the throat pleats and a lower jaw made of two separate bones that move independently. The discovery of this sensory organ is shedding new light on how these features coordinate to create successful feeding. 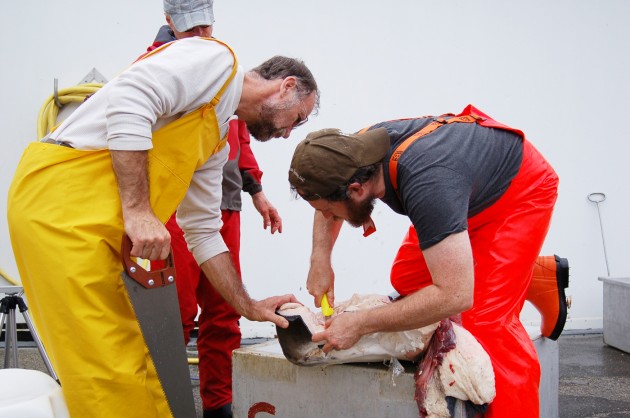 The organ, composed of connective tissue with papillae (protrusions) that contain nerves, is suspended in a gel-like material and is located in the whale’s chin in the space between the tips of the two lower jaw bones. Vascular and nervous tissue from an ancestral front tooth socket still remains in today’s whales and connect to the sensory organ. Evidence indicates that the sensory organ responds to jaw rotation when the whale opens and closes its mouth and when the whale’s throat pleats expand as it takes in water. 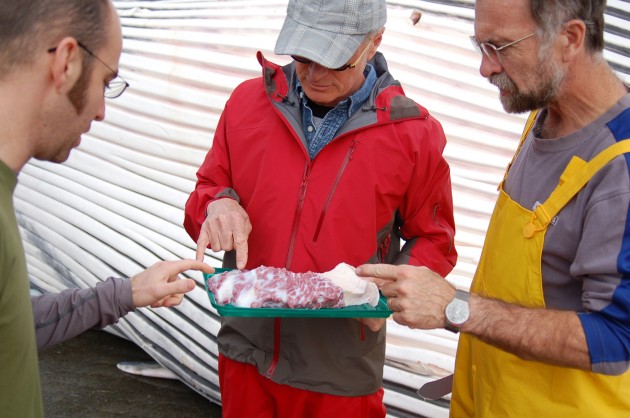 From left to right,  Jeremy Goldbogen of the Cascadia Research Collective, A. Wayne Vogland and Robert Shadwick point to a ridge of tissue sampled from the throat pouch a fin whale (background) in Iceland.  (Photo by Nicholas Pyenson / Smithsonian)

“The odd arrangement of tissues didn’t make much sense to us at first, but then we realized that this organ was perfectly placed, anatomically, to coordinate a lunge because that soft structure is pinched by the tips of the jaws, and deforms through the course of a lunge,” said Nicholas Pyenson, paleobiologist at the Smithsonian’s National Museum of Natural History and lead author of the research. “This deformation is registered by the nerves inside the organ, informing the gulping whale about its gigantic jaws, which must close before prey escape. This finding answers several outstanding theoretical questions and puzzling field data that suggest rorquals actively control their lunge, rather than letting their mouths passively inflate like a parachute.”

Fossil records show that the bottom jaw of baleen whales has been unfused, or separated, at its tip since the late Oligocene epoch (23-28 million years ago). Despite the long expanse of time to the present, this organ represents an evolutionary novelty for rorqual whales, based on its absence in all other modern species of baleen whale, such as gray and right whales. This organ has a fundamental role in one of the most extreme feeding methods in aquatic vertebrates, which facilitated the evolution of the largest vertebrates ever.

Because lunge feeding is a critical part of maintaining their large body size―blue whales can grow to more than 100 feet in length and weigh more than 150 tons―this discovery helps illuminate the set of anatomical and behavioral innovations that happened in evolutionary history of rorquals that allowed them to become oceanic giants. “It is a supreme irony,” Pyenson said, “that even after several decades of whaling where scientists had the opportunity to observe hundreds of thousands of whale carcasses, we are still only beginning to understand the anatomy of the largest ocean predators of all time.”