It has all the hallmarks of a paleontological crime scene: a massive graveyard along a remote desert highway containing the fossil bones of at least 40 dead whales and a slew of other marine victims. Discovered in 2010 in the Atacama Desert of Chile, this mysterious assemblage of bones baffled scientists trying to piece together the chain of events that led to its creation during the Miocene. Known locally as Cerro Ballena, or Whale Hill, it is the densest site for individual fossil whales and other extinct marine mammals ever found.

Now the mystery is solved: poisoning resulting in sudden death at sea. The culprit: common ocean algae. Blooming in profusion some 6 to 9 million years ago, the algae produced a deadly neurotoxin that was either ingested or inhaled by the animals causing organ failure and rapid death. Scientists believe the algae blooms were triggered by iron-rich runoff from the Andes Mountains. A scientific verdict on these deaths is handed down in a paper released today (Tuesday, Feb. 25) in the Proceedings of the Royal Society B.

Clues found in the graves

One clue to the cause of the calamity was that many of the whale skeletons are lying belly-up. “Like today’s humpback and blue whales, these prehistoric whales had a big throat pouch,” says Nicholas Pyenson of the Smithsonian’s National Museum of Natural History, lead author of the study. When they die and decompose the throat pouch fills with gas and “acts like a flotation device, it’s like a hot air balloon coming off their throat,” Pyenson explains. This belly-up position of the skeletons reveals the whales died out at sea and did not strand themselves upright on the shore.

The remarkably complete condition of many of the skeletons also reveals their upside-down bodies washed ashore quickly, soon after the animals died and before their remains could be scavenged and scattered by large ocean predators like sharks. “These big hunks of meat stranded on a tidal flat, yet there were no terrestrial predators like a bear, nothing really larger than a dog, that could dismember the carcasses and carry the bones away,” Pyenson says. In time the carcasses became bare bones that were covered over with sand. 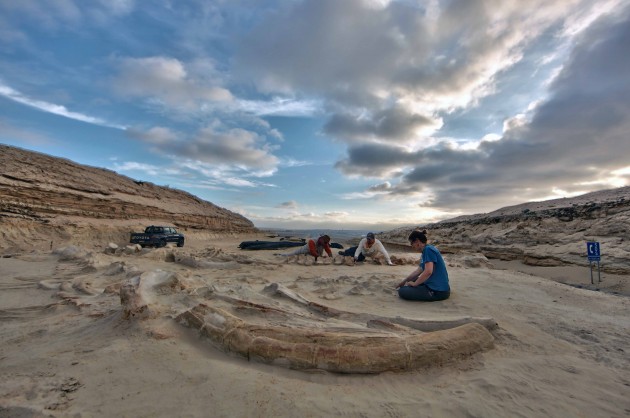 Chilean and Smithsonian paleontologists study several fossil whale skeletons at Cerro Ballena, next to the Pan-American Highway in the Atacama Region of Chile, 2011. (Photo by Adam Metallo)

Fossil algae mats found on the skeletons are another important indicator that algae blooms killed these animals. The fossil algae mats—produced when algae blooms in extreme profusion—are an orange color and have high iron content, Pyenson says. “In the modern world, dissolved iron promotes harmful algae blooms and the Andes are very iron-rich. So we argue that the mountains east of the site are the ultimate source of what’s powering these ancient blooms.”

A third important clue to cause of death is that such an eclectic assemblage of animals was buried at the site, Pyenson says. Although large baleen whales dominate the Cerro Ballena graveyard, ten different kinds of marine vertebrates are found there, including several whale species, marlins, two different species of seal, a walrus-like whale and an aquatic sloth. This indicates a large, indiscriminate event that took the lives of many creatures simultaneously, not just a virus, say, or other illness that killed only whales.

Not the first time the algae has killed

As it turns out, the evidence also exposes the algae as a repeat offender. Possibly the most important clue pointing to algae as the culprit, is that four different assemblages of fossil bones are found on four geologic levels in the Cerro Ballena deposit. This means this catastrophic death event occurred not once, but at least four different times in the same spot during a period of 10,000 to 16,000 years.

“The condition and arrangement of the bones, the presence of algal mats on some fossils, and the fact that there are multiple species of marine animals at the site, all point to killer algae as really the only plausible explanation,” Pyenson says. “In today’s world harmful algae blooms happen all the time. This is the first time we can pin it down in the fossil record for marine mammals.” 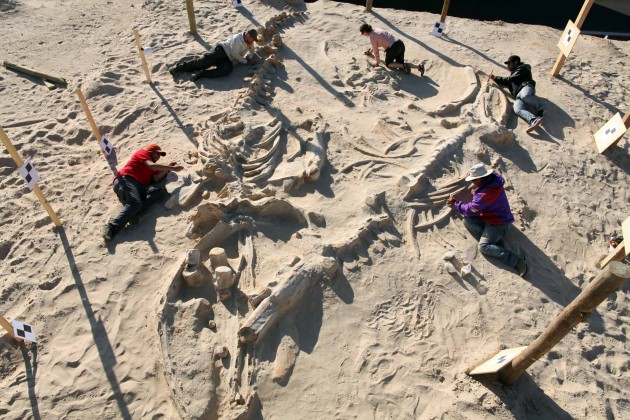 Chilean and Smithsonian paleontologists study several fossil whale skeletons at Cerro Ballena, next to the Pan-American Highway in the Atacama Region of Chile, 2011. (Photo by Adam Metallo)

What intrigues Pyenson about the Cerro Ballena site is that it offers such a clear window into the marine ecosystems and marine food webs of the Miocene. “I’m amazed at how comprehensive a snapshot it is,” he says. “We have a little bit of the familiar—baleen whales—and a little bit of the exotic—an extinct aquatic sloth and an extinct walrus whale. Yet in 240 meters of road cut we can sample fossil marine mammals that pretty much represents everything that we know of living in the ocean in South America at that time. That is what is compelling to me.”

The Cerro Ballena site also reveals just how full the oceans once were of whales, with some regions possibly even experiencing super-aggregations of whales, Pyenson says. “We don’t see baleen whale strandings like Cerro Ballena today. The issue is that today’s world has a shifted baseline because we nearly killed off all the baleen whales. They didn’t go extinct but we reduced their abundances by upwards of 95 percent. What was normal on Earth for hundreds and even thousands of years is no longer normal. So we are living in a very altered world today where baleen whales are not nearly as abundant as they used to be.”

Above: 3D digitization captured essential data about the arrangement and condition of the skeletons at Cerro Ballena before they were safely removed and deposited at the Museo Paleontologico de Caldera, a local natural history museum.

In addition, Pyenson says, the enormous wealth of fossils found at Cerro Ballena probably represent only a fraction of what is buried there. In fact, Pyenson adds, Cerro Ballena tells us that whale assemblages may actually be a lot more common in the fossil record than recognized and scientists might look elsewhere in the world in similar types of continental settings for other such assemblages of bones.