To understand the long-term effects of a prolonged tropical storm in the Panama Canal watershed, Robert Stallard, staff scientist at the Smithsonian Tropical Research Institute and research hydrologist at the U.S. Geological Survey, and Armando Ubeda, the LightHawk Mesoamerica program manager, organized four flights over the watershed to create a digital map of landslide scars. 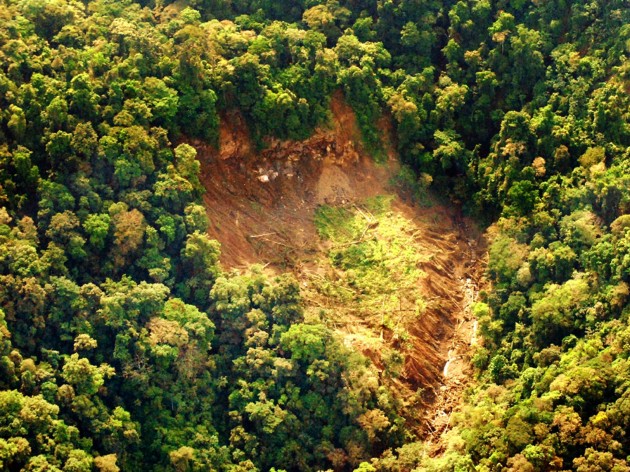 Two feet of heavy rain inundated the Panama Canal watershed between Dec. 7 and 10, 2010. Landslides tore down steep slopes, choking rivers with sediment and overwhelming Panama City’s water-treatment plant. Flooding closed the Panama Canal for the first time since 1935. Despite the deluge, the influx of sediments in the water forced authorities to shut down the plant, leaving a million residents of central Panama without clean drinking water for nearly a month.

LightHawk, a conservation organization based in the U.S., donates flights for research and conservation efforts. Retired United Airlines captain David Cole flew the Cessna 206 aircraft, and the four flights yielded images of 191 square miles (495 square kilometers) of watershed. Stallard observed numerous new landslide scars left behind by the December storm, supporting his prediction that landslides supplied much of the suspended sediment that disrupted Panama’s water supply.

The new watershed erosion map will allow Stallard and collaborators from the Panama Canal Authority to calculate the landslide risk of future storms and direct strategies to minimize the effect on Panama’s water supply. 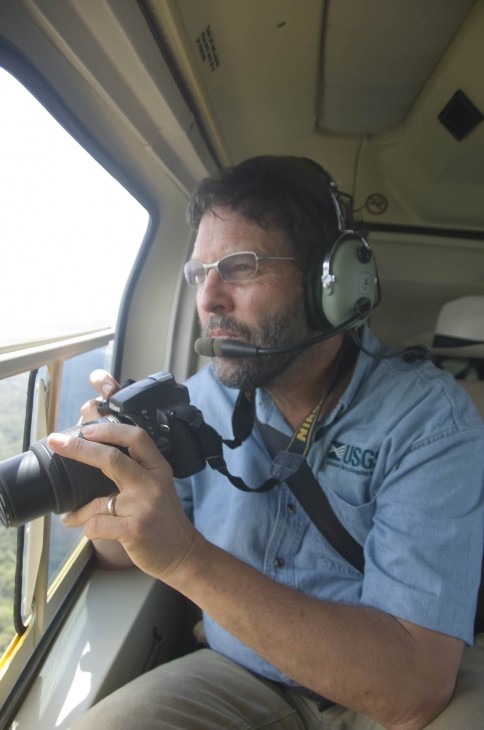 Tropical hydrologists agree that river-borne sediment originates from surface erosion or from deep erosion from landslides. In 1985, Stallard predicted that “deep erosion, not shallow surface erosion, is the primary process controlling the chemistry and sediment levels in many tropical rivers that pass through mountainous areas.” Few studies have been conducted to test this prediction.

Deforestation of steep slopes is the primary factor determining the number of landslides. Six decades of aerial photographs analyzed by USGS researchers in similar landscapes in Puerto Rico showed that landslide frequency doubles outside protected nature preserves, and that roads and infrastructure make landslides eight times more likely. Although landslides happen in natural forests, the objective is to limit their impact through appropriate land-use practices.

“With development, landslide intensity increases dramatically,” said Stallard. “In its history, the Panama Canal watershed has experienced huge floods. It’s still hard to say whether future floods will be accompanied by disastrous landslides like those produced by Hurricane Mitch in Central America.” In 1998, Hurricane Mitch swept across Honduras, Guatemala, Nicaragua and El Salvador causing more than 10,000 deaths and incalculable economic damage. Panama’s proximity to the equator puts the country outside the usual hurricane zone, but prolonged tropical storms may occur.

Erosion control is possible. Partnering with the Panama Canal Authority and Panama’s Environmental Authority, the Smithsonian is conducting a 700 hectare experiment in the canal watershed funded by the HSBC Climate Partnership to compare the effects of land-use choices, such as cattle ranching or reforestation with native tree species on water supply, carbon storage and biodiversity.  Stallard hopes that this research will provide new information about which land uses provide a steady supply of clean water for the Canal.

With the first rains in May, the eight-month wet season begins anew in central Panama. Drinking water flows freely, the rivers are clear and the Panama Canal is open for business. But bare slopes of past landslides continue to create secondary erosion, which will dislodge sediments from the steep, rainy and rugged Panama Canal watershed in 2011. The long-term effects of the 2010 storm may continue as renewed interruptions in the water supply in 2011.