Today, Wednesday, May 25,  astronomers unveiled the most complete 3-D map of the local universe (out to a distance of 380 million light-years) ever created. Taking more than 10 years to complete, the 2MASS Redshift Survey (2MRS) also is notable for extending closer to the Galactic plane than previous surveys – a region that’s generally obscured by dust. 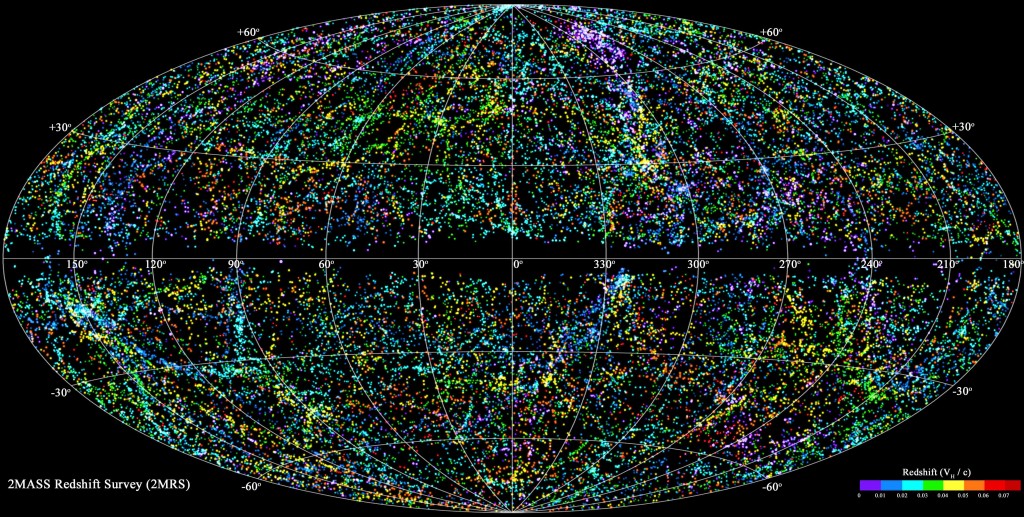 Karen Masters (University of Portsmouth, UK) presented the new map today in a press conference at the 218th meeting of the American Astronomical Society.

“The 2MASS Redshift Survey is a wonderfully complete new look at the local universe – particularly near the Galactic plane,” Masters said. “We’re also honoring the legacy of John Huchra, an astronomer at the Harvard-Smithsonian Center for Astrophysics, who was a guiding force behind this and earlier galaxy redshift surveys.” 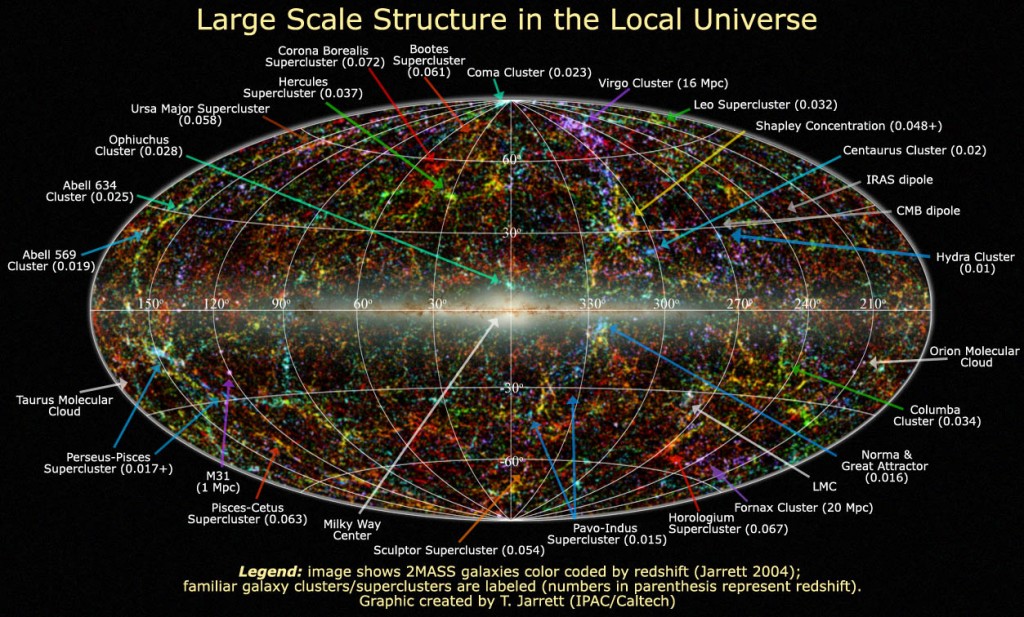 Finder chart of large scale structure in the local universe.

A galaxy’s light is redshifted, or stretched to longer wavelengths, by the expansion of the universe. The farther the galaxy, the greater its redshift, so redshift measurements yield galaxy distances – the vital third dimension in a 3-D map.

Robert Kirshner, Huchra’s colleague at the Center for Astrophysics (CfA), said, “John loved doing redshift surveys and he loved the infrared. He had the insight to tell when infrared technology, formerly the province of the experts, was ripe for routine use in a big project.”

“John was instrumental in setting up the 2MASS telescope at Mount Hopkins, seeing the infrared side of the project through, and making a much more complete survey of the local universe.  It’s a wonderful tribute to John that his colleagues have finished the infrared-selected galaxy redshift survey that John started,” he added.

The 2MRS mapped in detail areas previously hidden behind our Milky Way to better understand the impact they have on our motion. The motion of the Milky Way with respect to the rest of the universe has been a puzzle ever since astronomers were first able to measure it and found it couldn’t be explained by the gravitational attraction from any visible matter. Massive local structures, like the Hydra-Centaurus region (the “Great Attractor”) were previously hidden almost behind the Milky Way but are now shown in great detail by 2MRS.