As global temperatures rise, mangrove forests in the southeastern United States are pushing north. Scientists don’t know how long, how fast, or what the consequences will be, but images from NASA satellites–and a $1.3 million NASA grant–is going to help them find out. 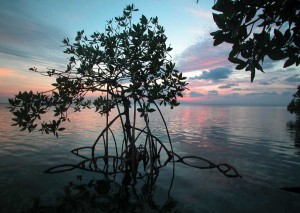 Image right: Cold temperatures usually restrict mangroves to the tropics and subtropics, but a warming climate is causing them to creep northward. (Smithsonian Institution photo)

Candy Feller, senior ecologist at the Smithsonian Environmental Research Center in Edgewater, Md., will lead an effort to track more than 100 miles of Florida mangrove forests that are encroaching on salt marshes to the north. Feller has been studying mangroves for almost 20 years in Florida, Panama, Belize and Australia. The new grant is one of 15 NASA-sponsored projects that will combine satellite data with field work to give scientists a bird’s-eye view of climate change.

Cold temperatures usually restrict mangroves to the tropics and subtropics, but a warming climate has empowered them to expand northward. 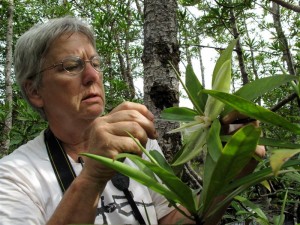 Image right: Candy Feller extracts nectar from the blossom of a Pelliciera tree in a mangrove forest in Panama. (Kennedy Warne photo)

Mangrove trees thrive in the tropics and subtropics near the ocean. Their roots often appear above ground, and they can grow to enormous heights, up to 45 meters in some locations. They start reproducing at a young age, so they can establish themselves in a community very quickly. However, mangrove trees also are very sensitive to cold, which in the past has kept them from moving very far north.

Only a couple degrees of latitude north of the Florida mangrove forests are the salt marshes, ecosystems populated by small, soft-stemmed plants that prefer a more temperate climate. These plants only sprout up in warm weather and burrow underground when it becomes cold. Because the two types of plants have such different structures, a mass migration of mangroves northward could impact everything in the salt marsh ecosystem, including carbon sequestration, nutrient flow and the kinds of organisms can survive there. 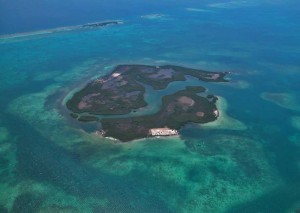 Image right: An aerial view of Mangal Cay in the western Caribbean – just one of many mangrove havens where Candy Feller has conducted research.

With less of a chill to hold back the mangroves, an overlap zone 120 miles long—from Cocoa Beach in the south to St. Augustine in the north—has emerged where mangroves have invaded salt marsh territory. Feller and her team will base their study in this zone. For the next four years, they plan to analyze 21 different sites in the overlap zone hoping to find out how long the invasion has been going on, how fast it is happening and–most importantly–how it is affecting the ecosystems where salt marshes once dominated.