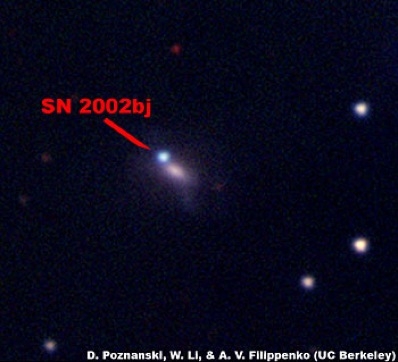 Supernova 2002bj was the first discovered example of a new type of exploding star. It’s just as bright as its host galaxy, the smudge to the supernova’s lower right. Photo: University of California, Berkeley)

In our universe, few events rival the massive power and destruction of an exploding star, or supernova. In a matter of seconds, an entire star shreds itself into pieces that blast outward at speeds of 20 million miles per hour. A supernova glows so brightly it can outshine an entire galaxy of stars, emitting as much energy as our Sun will in its entire 10-billion-year lifetime.

If a supernova were to happen within 25 light-years (150 trillion miles) of Earth, it would spell disaster for our world. Fortunately, no star that close is expected to explode.

“We can’t explain what’s causing them yet. That’s what makes them so interesting,” says Dr. Hagai Perets of the Harvard-Smithsonian Center for Astrophysics.

In “Type I” supernovas, a dead star called a white dwarf siphons hydrogen gas from a larger companion star until the former suddenly reignites nuclear fusion, burning explosively and shattering apart. In “Type II,” a young star much heavier than the Sun runs out of fuel, causing its core to collapse and triggering a vast explosion.

The first example of a new, third type of explosion came with the discovery of Supernova 2002bj (which was first examined by Dovi Poznanski of UC Berkeley and colleagues). SN 2002bj brightened very quickly, over just a few days, and faded just as dramatically. A typical supernova takes weeks to fade away.

By searching through previous studies, Perets ferreted out two more historic examples of the new supernova type, proving that SN 2002bj wasn’t an oddball. SN 1939B occurred in a distant elliptical galaxy – a round collection of stars very different from our own Milky Way, which is a disc-shaped spiral. SN 1885A exploded in our neighbor, the Andromeda galaxy.

The 1885 and 1939 supernovas happened in regions containing old stars, which suggests that they came from exploding white dwarfs. However, these explosions were less energetic than a typical Type I supernova. They also ejected much less material. When a white dwarf explodes, a Sun’s worth of carbon and oxygen (a white dwarf’s main constituents) blasts into interstellar space. The new type of supernova expelled only about one-fifth as much material.

“These supernovas are bright, but they don’t pack the punch of a regular supernova,” says Perets.

The new supernova type may result from explosive burning of a thin shell of helium on the surface of the white dwarf. This process could eject some material while leaving the rest of the white dwarf intact. However, no computer simulation produces all of the behaviors observed in these supernovas.

The existence of a new supernova type also has consequences for the chemical evolution of the universe. Many different chemical elements, from the calcium in our bones to the iron in our blood, come from supernova explosions. As Carl Sagan famously said, “We are star stuff.” This third type of supernova may produce more calcium and other elements lighter than iron, helping to enrich the universe with elements needed for planets – and life.

Late last year, an additional example of the new type surfaced: SN 2010X, which was first studied by Mansi Kasliwal of Caltech and colleagues.

With so few examples, there are still many questions to be answered. Powerful sky-survey instruments such as the Palomar Transient Factory, which is currently operational, and the Large Synoptic Survey Telescope that is planned for Chile, should find many more cases for astronomers to study.