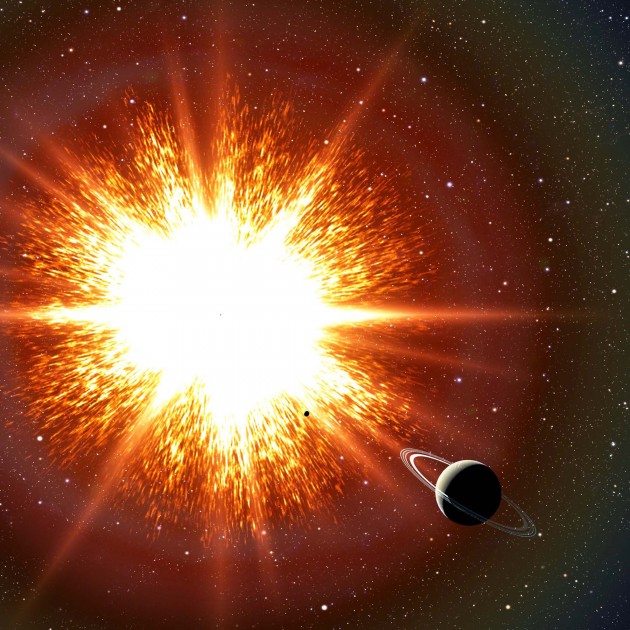 New research shows that some old stars known as white dwarfs might be held up by their rapid spins, and when they slow down, they explode as Type Ia supernovae. Thousands of these “time bombs” could be scattered throughout our Galaxy. In this artist’s conception, a supernova explosion is about to obliterate an orbiting Saturn-like planet.  (Image by David Aguilar)

In the Hollywood blockbuster “Speed,” a bomb on a bus is rigged to blow up if the bus slows down below 50 miles per hour. The premise – slow down and you explode – makes for a great action movie plot, and also happens to have a cosmic equivalent.

New research shows that some old stars might be held up by their rapid spins, and when they slow down, they explode as supernovae. Thousands of these “time bombs” could be scattered throughout our Galaxy.

“We haven’t found one of these ‘time bomb’ stars yet in the Milky Way, but this research suggests that we’ve been looking for the wrong signs. Our work points to a new way of searching for supernova precursors,” said astrophysicist Rosanne Di Stefano of the Harvard-Smithsonian Center for Astrophysics.

The specific type of stellar explosion Di Stefano and her colleagues studied is called a Type Ia supernova. It occurs when an old, compact star known as a white dwarf destabilizes.

A white dwarf is a stellar remnant that has ceased nuclear fusion. It typically can weigh up to 1.4 times as much as our Sun – a figure called the Chandrasekhar mass after the astronomer who first calculated it. Any heavier, and gravity overwhelms the forces supporting the white dwarf, compacting it and igniting runaway nuclear fusion that blows the star apart.

There are two possible ways for a white dwarf to exceed the Chandrasekhar mass and explode as a Type Ia supernova. It can accrete gas from a donor star, or two white dwarfs can collide. Most astronomers favor the first scenario as the more likely explanation. But we would expect to see certain signs if the theory is correct, and we don’t for most Type Ia supernovae.

For example, we should detect small amounts of hydrogen and helium gas near the explosion, but we don’t. That gas would come from matter that wasn’t accreted by the white dwarf, or from the disruption of the companion star in the explosion. Astronomers also have looked for the donor star after the supernova faded from sight, without success.

Di Stefano and her colleagues suggest that white dwarf spin might solve this puzzle. A spin-up/spin-down process would introduce a long delay between the time of accretion and the explosion. As a white dwarf gains mass, it also gains angular momentum, which speeds up its spin. If the white dwarf rotates fast enough, its spin can help support it, allowing it to cross the 1.4-solar-mass barrier and become a super-Chandrasekhar-mass star.

Once accretion stops, the white dwarf will gradually slow down. Eventually, the spin isn’t enough to counteract gravity, leading to a Type Ia supernova.

“Our work is new because we show that spin-up and spin-down of the white dwarf have important consequences. Astronomers therefore must take angular momentum of accreting white dwarfs seriously, even though it’s very difficult science,” explained Di Stefano.

The spin-down process could produce a time delay of up to a billion years between the end of accretion and the supernova explosion. This would allow the companion star to age and evolve into a second white dwarf, and any surrounding material to dissipate.

In our Galaxy, scientists estimate that there are three Type Ia supernovae every thousand years. If a typical super-Chandrasekhar-mass white dwarf takes millions of years to spin down and explode, then calculations suggest that there should be dozens of pre-explosion systems within a few thousand light-years of Earth.

Those supernova precursors will be difficult to detect. However, upcoming wide-field surveys conducted at facilities like Pan-STARRS and the Large Synoptic Survey Telescope should be able to spot them.

This research appears in a paper in the Sept. 1 issue of The Astrophysical Journal Letters and is available online. Authors are Di Stefano (CfA), Voss (Radboud University Nijmegen, The Netherlands), and J.S.W. Claeys (Universiteit Utrecht, The Netherlands).