Until now, supernovas came in two main “flavors.” A core-collapse supernova is the explosion of a star about 10 to 100 times as massive as our Sun, while a Type Ia supernova is the complete disruption of a tiny white dwarf. Today, astronomers are reporting their discovery of a new kind of supernova called Type Iax. This new class is fainter and less energetic than Type Ia. Although both varieties come from exploding white dwarfs, Type Iax supernovas may not completely destroy the white dwarf. 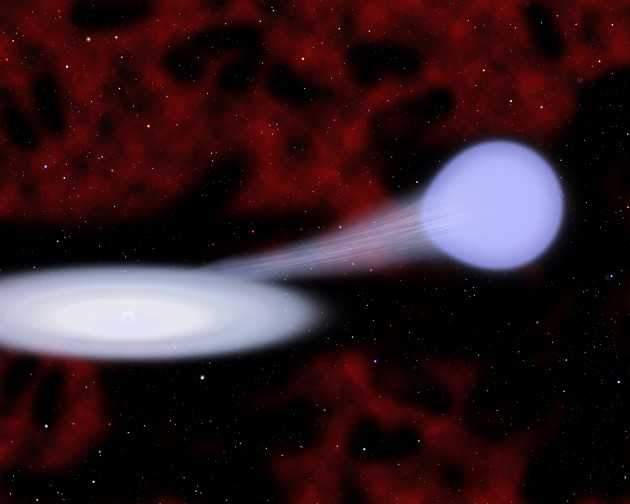 “A Type Iax supernova is essentially a mini supernova,” says lead author Ryan Foley, Clay Fellow at the Harvard-Smithsonian Center for Astrophysics (CfA). “It’s the runt of the supernova litter.”

Foley and his colleagues identified 25 examples of the new type of supernova. None of them appeared in elliptical galaxies, which are filled with old stars. This suggests that Type Iax supernovas come from young star systems.

Based on a variety of observational data, the team concluded that a Type Iax supernova comes from a binary star system containing a white dwarf and a companion star that has lost its outer hydrogen, leaving it helium dominated. The white dwarf collects helium from the normal star.

Researchers aren’t sure what triggers a Type Iax. It’s possible that the outer helium layer ignites first, sending a shock wave into the white dwarf. Alternatively, the white dwarf might ignite first due to the influence of the overlying helium shell.

Either way, it appears that in many cases the white dwarf survives the explosion, unlike in a Type Ia supernova where the white dwarf is completely destroyed. “The star will be battered and bruised, but it might live to see another day,” says Foley.

Foley calculates that Type Iax supernovas are about a third as common as Type Ia supernovas. The reason so few have been detected is that the faintest are only one-hundredth as bright as a Type Ia.

“Type Iax supernovas aren’t rare, they’re just faint,” explains Foley. “For more than a thousand years, humans have been observing supernovas. This whole time, this new class has been hiding in the shadows.”

The Large Synoptic Survey Telescope, in which the CfA is a partner, could discover thousands of Type Iax supernovas over its lifetime.

This research has been accepted for publication in The Astrophysical Journal and is available online [http://arxiv.org/abs/1212.2209].