Luminosity of extreme galaxy most likely driven by star formation 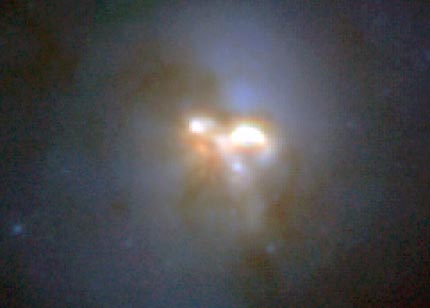 A Hubble image of the galaxy Arp 220, the brightest object in our local universe. A team using the Submillimeter Array studied the gas component of this galaxy, and concluded that bursts of star formation power its dramatic energetics. (Image: NASA and Hubble)

Arp 220 is the closest galaxy to the Milky Way with an “extreme luminosity,” a measurement defined as being more than about 300 times the luminosity of our own galaxy. Some dramatic galaxies have luminosity values ten times brighter still. Astronomers are currently piecing together the reasons for these huge energy outputs, while sorting out why our own galaxy is so modest. The two primary suspects are bursts of star formation that produce many hot young stars, and processes associated with accretion of material onto a supermassive black hole at a galaxy’s nucleus. Arp 220 is the closest example, and one of the best places to probe these scenarios.

Recently a team of astronomers including Smithsonian Astrophysical Observatory astronomer Jun-Hui Zhao used the Submillimeter Array, an 8-element radio interferometer located atop Mauna Kea in Hawaii, to obtain the first unbiased galaxy survey of molecular and atomic lines using a telescope array. They covered a complete, large wavelength interval in the millimeter regime that is accessible through Earth’s atmosphere. They report finding 73 spectral features from 15 molecular species in this survey band. A remarkable 28-percent of the total flux from Arp 220 in this band is emitted by these molecules. The Submillimeter Array also obtains images of the galaxy at each of the many wavelengths. 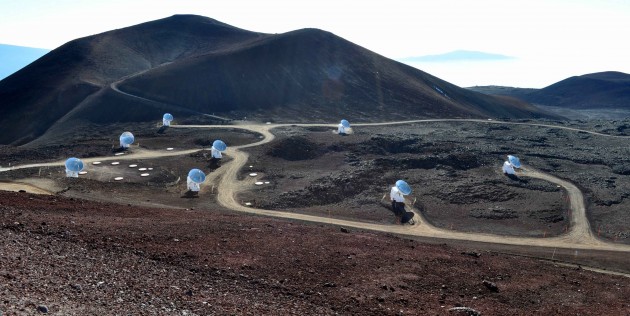 The Submillimeter Array in Hawaii.

The results are consistent with the theory that Arp 220’s luminosity is driven primarily by star-formation. The chemistry of Arp 220 derived from the observations also leads to this conclusion, with species normally enhanced by star formation clearly detected. Moreover, it appears one such burst of activity is currently underway. The team estimates, for this extreme galaxy, that several million regions of activity are localized within a relatively small volume (a few thousand light-years) around a nucleus. The new results are an important improvement in our understanding of what powers extreme galaxies, and how they differ from our Milky Way.