The insect’s absence was conspicuous for botanists studying the reproduction of two little-known gingers—Roscoea cautleoides and Roscoea humeana—in the Himalayan Mountains of China. During three different years from early May to late June the Chinese and American scientists waited for a special pollinator to appear and sip nectar from the gingers’ flowers. They were expecting a fly or moth with a long, specialized tongue; one that fit down the deep, narrow corolla tubes of the ginger blossoms. The scientists staked out dozens of the gingers night and day while the plants flowered, but no long-proboscid pollinator ever appeared. Climate change, they surmised, was responsible for the loss of this highly specialized and now, perhaps forever unknown insect.

Although the breakdown of such a mutualistic relationship can have devastating consequences for a plant species, these gingers were adapting, the researchers observed. Remarkably, they found, the flowers of the two ginger species remained viable for 6 to 8 days, the greatest longevity of any known ginger flower. On average ginger blooms last one day only. 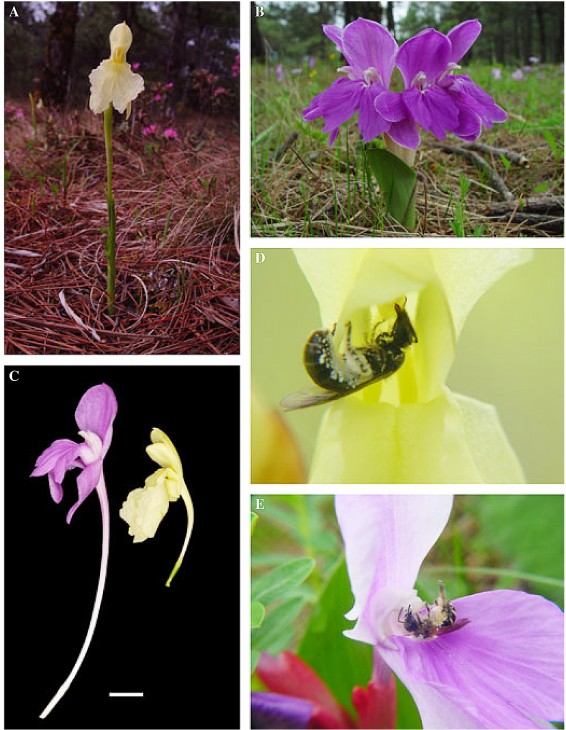 Such an adaptation increased the probability that other insects would pollinate these flowers. Forging short-tongued bees, the botanists observed, were one of the few insects that visited the gingers and occasionally pollinated them.

Although the loss of their specialized pollinator is a serious blow to R. cautleoides and R. humeana, “our study represents a striking example that compensatory floral mechanisms help to ensure reproductive success in light of the apparent loss of specialized pollinators,” the researchers write in the journal Plant Biology.

A paper on this research, co-authored by John Kress of the Smithsonian’s National Museum of Natural History; Z.-Q. Zhang, P.-Y. Ren, J.-Y. Gao and Q.-J. Li, of the Chinese Academy of Sciences; and W. –J. Xie of the Yunnan Academy of Agricultural Sciences, was published recently in Plant Biology, a journal of the German Botanical Society and the Royal Botanical Society of the Netherlands.