Carnivorous plants are a fascinating example of nature at its best. Living in habitats with nutrient-poor soil, carnivorous plants evolved to attract some insects as food, while at the same time attracting different insects to pollinate them.

Smithsonian Science News talked with Gary Krupnick, head of the Plant Conservation Unit at the Smithsonian’s National Museum of Natural History, about how carnivorous plants attract insects—both for food and for pollination—and what we know about those relationships.

Godfrey’s butterworts have leaves coated with small hairs that secrete sticky mucilage, which insects mistake for water or nectar. When the insect gets trapped, the edge of the leaf slowly rolls over the insect to digest it. (Photo by Vivian Negron-Ortiz via Wikimedia Commons) Its pollinator is the colorful hoverfly. (Photo courtesy of the U.S. Geological Survey)

Krupnick: Carnivorous plants evolved in nutrient-poor habitats where very few other plant species were growing, such as bogs and wetlands, because there was very little competition from other plants for those areas. Most plants absorb nutrients through their roots from nutrient-rich soil. Since carnivorous plants grow in nutrient-poor areas they eat insects to get the nutrients they need.

Q: How do carnivorous plants distinguish whether an insect is friend or food? 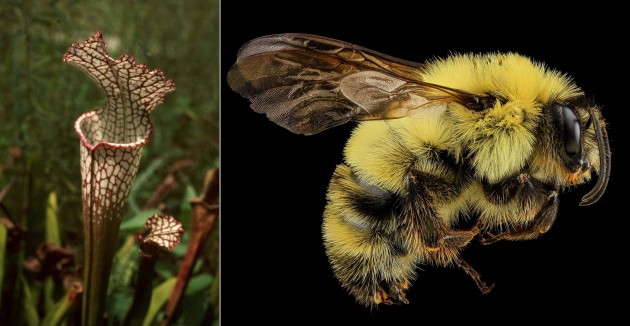 White–topped pitcher plants attract insects with their color, scent, and nectar-like secretions. Inside the pitcher are downward pointing hairs that make retreat by captured prey challenging, and the bottom is filled with fluid containing digestive enzymes. (Photo by G. A. Cooper, National Museum of Natural History, Smithsonian Institution) Its pollinator is the two-spotted bumble bee. (Photo courtesy of the U.S. Geological Survey)

Krupnick: Who knows what a pollinator is thinking. They’re flying out there looking for a reward, like pollen or nectar, since their main function is to find food to take back to their hive. If they’re attracted by something found in a carnivorous plant’s trap, they could easily fall into it. However, carnivorous plants are clever enough to use different rewards that attract pollinators in their flowers, not their traps.

Q: Do carnivorous plants ever accidentally eat their pollinators?

Krupnick: Yes, accidents happen. However, carnivorous plants don’t want to eat an insect that has their pollen on it. If the timing is right they’ll eat whatever falls into their traps, but it’s not evolutionarily advantageous to eat their pollinators. So they try to distinguish their flowers and traps to attract the right type of insect as either prey or pollinator. 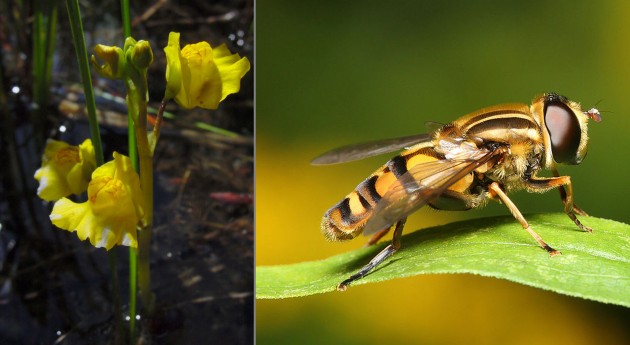 The Common Bladderwort has underwater bladders with small openings sealed by a hinged door with trigger hairs. When aquatic invertebrates touch the hairs, the door releases a suction pulling the invertebrate into the bladder, where enzymes digest the victim. (Photo by Noah Elhardt via Wikimedia Commons) Its pollinator is the hoverfly. (Photo by Mdf via Wikimedia Commons)

Q: Where can you find carnivorous plants?

Krupnick: Carnivorous plants are found in wetlands (bogs, swamps and marshes) worldwide. In the U.S. a majority are found in the Southeast, along Mississippi, Alabama, the Carolinas, southern Georgia and the Florida Panhandle. Some are also found in California, Hawaii and along the southeast area of the Great Lakes. Others like the common bladderwort are found in every state. Many carnivorous plant species are threatened or endangered in the wild due to habitat loss, alteration and illegal poaching. 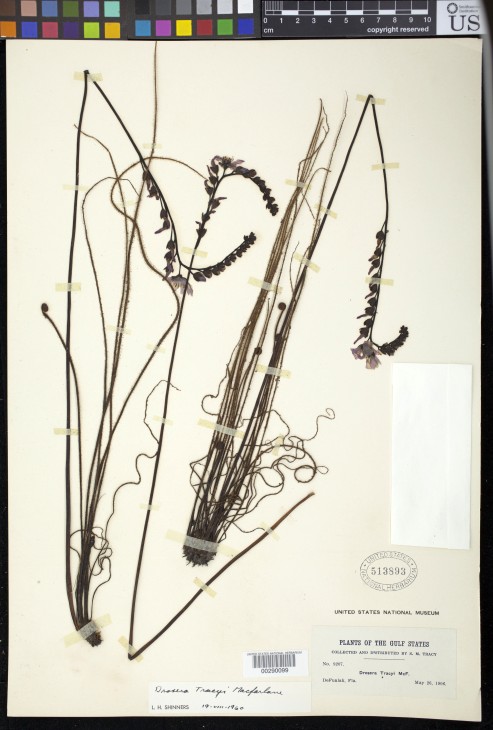 Tracy’s sundew (“Drosera tracyi”) specimen, a carnivorous plant, in the collection of the U.S. National Herbarium at the National Museum of Natural History, Smithsonian Institution

Q: How much do we know about carnivorous plants and their relationship to pollinators?

Krupnick: We know very little about the interaction between carnivorous plants and their pollinators. There is a lack of published scientific information particularly about how carnivorous plants are pollinated in the wild. Because they’re so fascinating and they’ve been cultivated so well, humans have been pollinating them in greenhouses but few observations have been made in the wild. We have a lot more to learn about their habitats and their pollinators to help conserve these species.