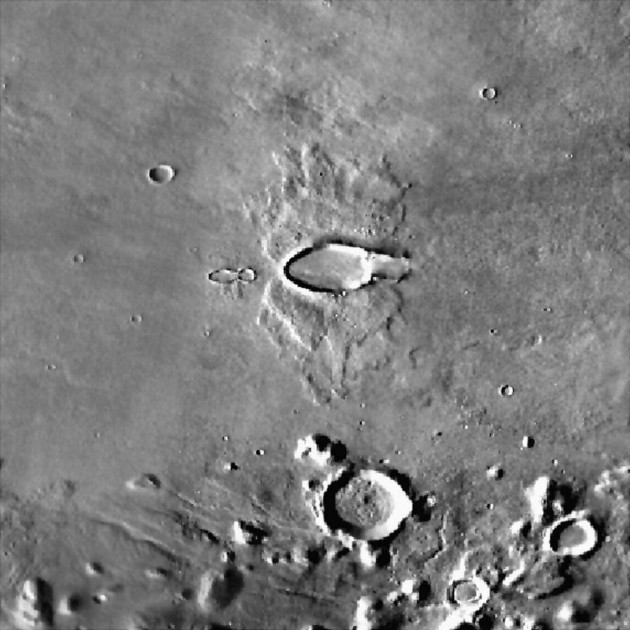 A double, oblique impact crater on the surface of Mars. Although the origin of such elliptical impact craters on Mars is uncertain, some scientists have determined that the nature of these particular features is best explained by the impact of a former Mars-orbiting moonlet. Potentially many such moonlets were in orbit around Mars at one time, and Phobos and Deimos are the only two surviving objects.

The Martian moons, Phobos and Deimos, may have been the result of a giant impact that sent rocks and debris into orbit around Mars, instead of asteroids that were captured by the planet’s gravity as previously thought. After going into orbit, the material from the giant impact aggregated and formed into small, low-mass moons. This collision could also account for why Mars spins on its axis. This theory is presented in an article by Smithsonian scientist Robert Craddock at the Center for Earth and Planetary Studies to be published in the Icarus International Journal of Solar System Studies.

In recent years a number of separate observations suggest that the Martian satellites were the result of giant impact. Similar to the Earth–Moon system, Mars has too much angular momentum; in both cases a giant impact may have caused the planets to spin on their axes. The giant impact on early Earth placed material into orbit that eventually formed the moon; it is likely that a giant impact on early Mars also placed material into orbit. Unlike what happened with the Earth’s moon, however, this material never coalesced into a single giant moon. Instead, a number of smaller moonlets formed. Over time the orbits of many of these moonlets probably decayed and ended up crashing onto the surface Mars until only two were left. This also explains the orbits of Phobos and Deimos. If they were captured asteroids, their orbits should be different and eccentric; their similar flat and circular orbits would be a natural consequence of having formed from material from a giant impact that was placed into orbit. 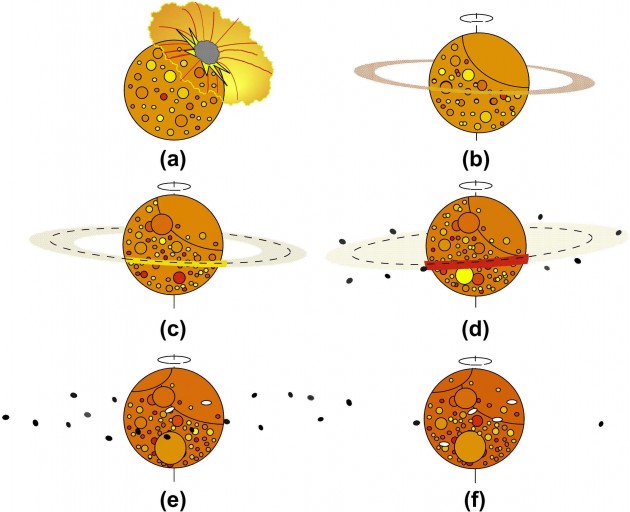 Model for the origin of Phobos and Deimos. (a) Mars-spinning planetesimal collides with Mars vaporizing material and associated large impact basin is formed. Angular momentum imparted to the surface gives Mars its final spin rate. (b) Vaporized material forms an accretionary disk. (c) Materials dissipate past the Roche limit of Mars (dashed line) and begin to coalesce into small moons. (d) Moons continue to form until accretion disk is exhausted. Only Deimos forms outside synchronous rotation. (e) Accretion disk completely dissipates. Dozens of small moons are left orbiting Mars. Tidal perturbations cause these moons to fall back towards the martian surface forming grazing impacts (white ellipses). Development of the Tharsis bulge causes the orbital plane to precess. (f) Present martian system with only Phobos and Deimos in orbit.

“Are Phobos and Deimos the Result of a Giant Impact?” will be published by Icarus International Journal of Solar System Studies and is now available online.

The Center for Earth and Planetary Studies is the scientific research unit within the Collections and Research Department of the National Air and Space Museum. CEPS scientists perform original research and outreach activities on topics covering planetary science, terrestrial geophysics and the remote sensing of environmental change.